It has now been over one year since the end of the Canadian Union of Public Employees (CUPE) 3903 strike at York University in March 2015. [Ed.: see Bullet No. 1088 and Bullet No. 1091 for more background information.] This strike began when 3,700 teaching assistants, contract faculty, graduate assistants and research assistants voted to walk the picket lines. The decision came just days after a historic strike vote by 6,000 teaching assistants and other student academic staff in CUPE 3902 Unit 1 at the University of Toronto. 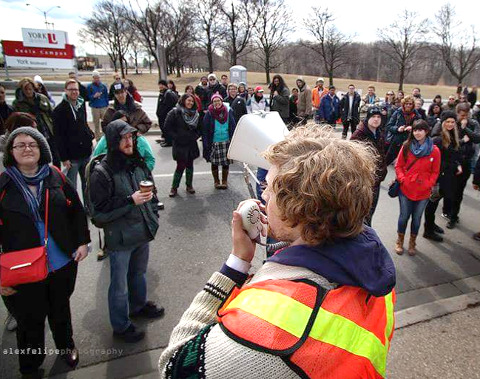 At present, the legacy of the strike is controversial. Members of CUPE 3903 are divided over the crucial question of whether this legacy should be regarded as one of victory or defeat. The purpose of this article is to use the benefit of hindsight to critically reflect upon the politics of the CUPE 3903 strike at York and its aftermath.

It aims to provide a plausible assessment of both accomplishments and limitations of the strike with a view to identifying how the union can respond more effectively to current and future challenges. Such an assessment will hopefully be capable of catalysing renewed debate about the kind of union strategy, organization and tactics that are necessary to enable university workers to fight back and win against their employers.

Members of CUPE 3903 chose to strike because of the poverty and precarity which has become the norm within universities. Alongside decades of chronic government underfunding, university administrators have sought to maintain financial stability by growing student enrolments while cutting back full-time academic staff. The result has been the degradation of academic labour through the growth of a more segmented workforce and a sharp fall in the number of permanent faculty per student.

Universities in Canada now operate like corporate businesses in an environment marked by permanent austerity and conditional financing.1 This is expressed in the commodification of scholarly research, cuts to state funding, reductions in university autonomy from government, the deregulation of tuition fees, the erosion of collegial self-governance and the growing power wielded by boards of governors and senior administrators.

The growth of contract faculty has occurred alongside an increase in the number of teaching assistants. Although guaranteed work for the duration of their study, teaching assistants earn wages well below the poverty line once their tuition is deducted and routinely engage in unpaid overtime. In contrast to popular depictions of academe as a privileged ‘ivory tower’, poverty and precarity are issues facing university employees in the contemporary capitalist university.

Conflict between the executive committee and union militants was a central feature of the CUPE 3903 strike at York. Both before and after the strike vote, the then executive committee – known as ‘The Slate’ – sought to avoid a dispute at all costs. They prioritized collaboration with the boss over workers’ interests by seeking to divide and rule the different units of the local and by pushing for concessions at the bargaining table. The Slate was resisted by a militant minority who conducted small-scale campaigns against concessions and in support of democratically decided bargaining proposals.

This dynamic was visible at a ratification vote held on March 9th. The Slate actively campaigned for a ‘yes’ vote and their supporters distributed leaflets pointing to “real and significant gains for all three units of the local.”2 Militants responded by circulating leaflets providing information about how there had been no progress at the bargaining table and calling on all members to ‘strike to win’ and ‘vote the rat down’.

It was also on display at a general assembly held on March 18th. At this meeting, a group of militants pushed through a motion to prevent the executive committee from pro-temming two of its supporters to the bargaining team. When elections were held later that evening, anti-Slate candidates were elected with overwhelming majorities.

3903 members also organized against racism, sexism and ableism. A Black, Indigenous and People of Colour Caucus was formed,3 while the Silence is Violence at York group came into being after a member of the union executive committee was arrested and charged with sexually assaulting a colleague.4 Members of the 8th Line Committee tasked with organizing alternative duties for members who couldn’t picket waged an uphill struggle against the ableist biases of CUPE.

The strike also saw efforts to construct solidarities across social and institutional divides. Members of CUPE 3903 and CUPE 3902 distributed 40,000 copies of The Penguin strike newspaper in metro stations across Downtown Toronto. Making the case that the strikes were in defence of accessible and high-quality education for the community as a whole, the articles emphasized the common interests of workers and students in opposing capitalist austerity through broad-based social movements.

Ordinary union members turned out to picket lines every weekday for an entire month. In what were sometimes brutally cold weather conditions, they faced real physical hardships and were vulnerable to criminal attacks by motorists.5 Some of the picket lines also established their own popular decision-making structures and sent representatives to Strike Committee meetings. When the Senate Executive voted to resume a substantial number of classes on 11th March, many lines responded by escalating their tactics. Blocking thousands of cars per day, they effectively fought the administration to a standstill.

The CUPE 3903 strike was a landmark event for TAs, GAs, RAs and contract faculty, many of whom had never before withheld their labour-power from the bosses who exploit them. For one whole month – on and off the picket lines – they saw that the power of trade unions does not reside at the bargaining table, but rather with the solidarity and struggles of working people in resisting capital’s domination of the workplace. Yet, the strike produced mixed results.

On the one hand, the new collective agreements ratified on March 31st brought real material gains. These included the reinstatement of tuition indexation for graduate students, the reversal of a $7,000 per year increase in the cost of international graduate tuition, recognition of LGBTQ as an employment equity category, a $200,000 per year direct childcare benefit fund, wage rises and minimum funding for all graduate student-workers and the extension of a range of existing benefits.

On the other hand, management retaliated after the strike with a strategy of undermining and violating the new collective agreements at every turn. Most notably, they used legal ambiguities to slow the implementation of the $7,000 tuition rebate for all but a handful of international graduate students. On this occasion, a newly elected 3903 executive slate was able to successfully enforce the contract through legal arbitration.

More recently, York management has unilaterally imposed a new ‘Fellowship’ funding model on the union. This change will destroy 670 unionized Graduate Assistantship (GA) jobs in September 2016 by replacing the work component of graduate student funding with a student fellowship covering the cost of tuition. It amounts to blatant union-busting, the goal of which is to devalue the labour of graduate student-workers and make their working conditions more precarious.

The Limits of Legalism

By attacking the union, management shows that its promises to graduate students cannot be trusted. Yet, by undermining the collective agreements, the implementation of the Fellowship Model threatens to lower morale of members and overall trust in the union. Following on from their most recent success, the response of the 3903 executive committee has once again focused on contract enforcement through legal arbitration.

But the ability of the union to enforce the contract reflects the balance of power between workers and management here and now, not when the contract was initially signed. As such, it is impossible to win in the peace treaty what cannot be won on the battlefield. While a legalistic strategy dependent on capitalist labour law may or may not secure short-term gains, it is guaranteed to lose in the long-run.

The ‘no strikes, no lockouts’ union clause which forms the backbone of contemporary capitalist labour law is systematically biased in favour of the employers. In this system, the fundamental purpose of collective bargaining is not to empower the mass of workers, but rather to disorganize and control them in the interests of the bosses’ bottom line.

The consequences of dependence on capitalist labour law for CUPE 3903 are potentially severe. If the union fails to roll back the Fellowship Model in arbitration, it risks a downward spiral of concessions in which current claw backs lower union morale and thereby reduce the capacity of the union to resist claw backs in the future. Without an assertion of countervailing power by rank and file members, collective bargaining gains will be clawed back by management one by one.

To challenge the capitalist assault on postsecondary education at York, CUPE 3903 needs to shift the balance of power in favour of workers. This will require campaigning against claw backs in preparation for a vigorous contract fight and future strike. However, the current systematic absence of rank and file organization within 3903 – the flipside of an unhealthy dependence on capitalist labour law – poses a significant barrier to achieving this. 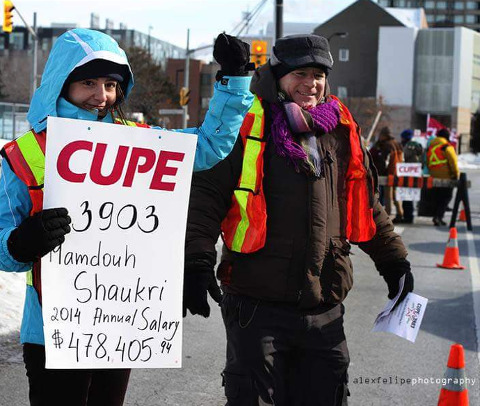 When members used their votes to sweep rank and file candidates into executive office in the wake of the March 2015 strike, they expressed their preference for a different kind of unionism. But it takes more than a change of personnel at the top to transform deeply rooted union practices and structures. What is needed is a radical break with past union strategy and tactics that places rank and file democracy and organization at the forefront of the struggle.

Power on the shop floor can only be built democratically from the bottom up. Rather than relying on a small number of executive officers, staff and union activists who see their role as servicing workers’ interests by doing the work for them, the workers themselves need to become conscious of their role as the primary agents in their own struggle. Simply filing a grievance or taking problems to arbitration cannot build power. A union is not an insurance plan. It simply cannot work unless all members participate.

But it is only through organization that members become the union. This requires concrete changes to encourage sustained participation by the majority of union members. Union democracy is a continuation of good organizing, which means helping members to achieve their self-identified goals. From this perspective, the fundamental purpose of the union is not merely to enforce the contract, but to build power by organizing workers and developing their consciousness through daily struggles within and beyond the workplace.

If CUPE 3903 starts organizing to build union democracy, then it can successfully resist management claw backs and make the case for worker-led alternatives to capitalist postsecondary education. •

Kyle Bailey is a PhD candidate in the Department of Politics at York University in Toronto. His latest article is “Stakeholder Capitalism Against Democracy: Relegitimising Global Neoliberalism” in the Journal of Australian Political Economy.