The People’s Climate Plan Teach-in, held in Toronto June 4,1 took great strides forward in presenting a forceful alternative to the inadequate and deceptive climate action proposals of Canada’s federal government. In the opening session, five leading climate activists presented a coherent, unified climate justice strategy, proposing effective action to save the world from climate disaster interlocked with practical measures to assist working people and the poor who are the first victims of global warming. Displayed in the meeting, held in the University of Toronto, were the banners: “Pipelines = Climate Change”; “Stop Line 9”; and (in French) “Leave Fossil Fuels in the Ground.” 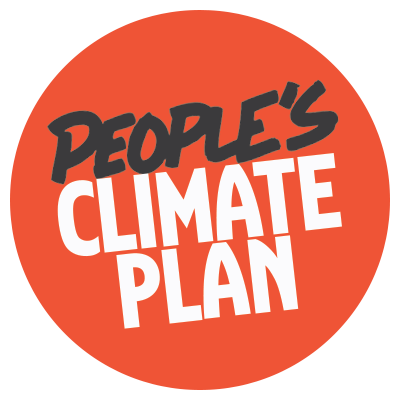 After lunch, the more than 100 participants split up into training groups of half a dozen to develop skills for effective intervention in the “public consultation” meetings the Trudeau government proposes to hold over the coming three months.

The proposed framework for this intervention is the People’s Climate Plan (PCP),2 a simple structure of three principles (or “pillars”) to guide those taking part in such gatherings.

“We’ve been to three of these consultations, and we know how they’re organized,” PCP activists explained. “Government facilitators divide participants into small groups and then give each group a topic designed to force discussion into a channel favourable to government policy. “For example, they ask ‘How can we combine economic growth with emissions reductions?’ – implying that tar sands expansion is part of the bargain. If you accept the question on their terms, you’ve already lost the argument.”

If environmentalists argue at cross purposes or try to make too many different points, their voices can be sidelined and ignored. Those speaking for climate justice need to unite around a common focus and strategy. The PCP proposes three principles to assure this focus:

When government facilitators pose inappropriate themes, the PCP spokespersons suggested that we use an “ABC” approach:

Achieving this degree of focus may seem a tall order for environmental and social activists. Often we use discussion periods to express a broad and seemingly chaotic range of personal viewpoints. We rightly prize our diversity. Yet when entering a discussion structured by a government with quite alien goals, PCP activists suggested, we must harmonize and unify our approaches.

I myself participated in such an effort in February, when I attended an East-End constituency Liberal policy conference along with three other supporters of Toronto East End Against Line 9. After smoothing the way with kind words about positive aspects of Trudeau’s promises, we were able to win the conference to our key points on climate policy, while making new friends for our committee – much to the consternation of the local Liberal MP.

In the June 4 conference, a couple of hours of intense work in our breakout groups familiarized us with the PCP approach.

The panel discussion preceding these training sessions illustrated the same theme. The five speakers were drawn from diverse and seemingly unrelated arenas of social activism. Nonetheless, the panelists succeeded in zeroing in on a common theme of climate justice, enriched by relating them to diverse work areas. Here are my notes of the panelists’ remarks:

Chippewas of the Thames First Nation

The keynote speaker, Myeengun Henry of the Chippewas of the Thames First Nation, recounted how his people, who live in southwest Ontario, learned that a tar sands pipeline, Enbridge’s “Line 9,” was to be built across their traditional territory, without the consultation required by Canada’s constitution.

Alarmed by the danger of a poisonous tar sands oil spill in their territory, the Chippewas asked the federal government for consultation. There was no response. So Myeengun’s people boldly challenged the federal regulator’s right to approve the pipeline and took their case to federal court. The Supreme Court has agreed to hear their case, which will be argued on November 30.

But the Chippewas of the Thames are aiming at more than stopping a pipeline. They have visited New Orleans to express support for hundreds of indigenous families there who have been driven from their homes by the effects of climate change. The Chippewas plan to bring together Indigenous climate protesters from B.C., Nunavut, Atlantic Canada, and the U.S. – “from all of Turtle Island” – on Chippewas of the Thames territory at the end of August.

Their goal is nothing less than sweeping social reorientation. Displaying a traditional indigenous two-row wampum belt, symbol of the treaties of respectful coexistence and mutual aid offered by indigenous peoples to the European settlers, Myeengun said, “We are going to build a nation in the spirit of our wampum and its teachings.”

The second speaker was a characteristic global citizen of our century – a climate refugee. “My livelihood was destroyed by a hurricane, leaving me and my family destitute,” said Gabriel Allahdua from the Caribbean island nation of St. Lucia. “I came to Canada as a migrant worker in 2011, thinking it was a place of diversity and human rights.”

Yet under Canada’s migrant worker laws, migrants “face harassment at the work place with no recourse. We are denied minimum wage and paid less for equivalent work. Our labour contracts and labour laws are not enforceable. We can be expelled from Canada for speaking out,” Gabriel said. “We are denied the right to stay in Canada and forcibly separated from our families. The evils are systematic and supported by those at the top.”

“St. Lucia and other poor countries are the least responsible for climate change but suffer its worst effects,” Gabriel said. The island is impoverished, battered by the global economic conditions, and its banana-based economy is vulnerable to “devastation by hurricanes that get worse and worse.” Meanwhile, extreme weather events, driven by climate change, extract an increasing toll, with 90 per cent of deaths occurring in “developing” – that is, poor – countries.

Gabriel’s group, Justice for Migrant Workers, demands that migrant workers in Canada receive status, in order to provide equal rights to all workers.

Megan Whitfield, Toronto President of the Canadian Union of Postal Workers (CUPW), spoke on the theme of community power. “We have to get our own members engaged in efforts regarding climate change,” by remaking Canada’s publicly owned postal service into a community-based network to reduce carbon emissions, she said.

“We want to force Canada Post to go green. It has the country’s largest vehicle base; it should be changed over to electric vehicles. We have more retail outlets than Tim Hortons – let them provide electric charging stations and put solar panels on the roof. The post office is a community hub: let it provide Internet access to the many who otherwise can’t afford it.”

Door-to-door letter carriers, which the last government tried to eliminate, are the “eyes and ears of the community. We know you second-best to your own family. It’s a low-emissions alternative to delivery vehicles.”

Two million low-income workers in Canada pay up to 4000 per cent a year in interest to payday lenders. “We can provide an alternative with post-office banking – a popular service in many countries.”

Megan urged environmentalists to support the campaign to Save Canada Post and to take part in the present governmental postal service review.

“There’s lots of discussion about climate change, but very few programs that have any impact,” said Adam Scott, Senior Campaigner at Oil Change International. “We’ve had 20 years of governmental negotiations, but nothing has been done. Canada’s federal government has effectively no climate policy.”

“Canada led the charge in the Paris climate negotiations to set a 1.5-degree limit on global warming, and that target requires that we eliminate fossil fuels entirely,” Adam pointed out. That fact has not sunk in. “Pipelines and tar sands are the elephant in the room – single-handedly blocking emissions reduction and posing an absolute barrier to Canada’s progress toward its goals.”

Yet the Trudeau government insists that we can further expand oil consumption and usage while reducing emissions – an absolute impossibility. “We must ask Ottawa: if you increase oil industry emissions, what do you intend to cut out to make up for that,” Adam said.

“Canada has used the atmosphere as a dumping ground for its industrialization,” he said. “Now new developing countries cannot take that road” – and they pay the price of our pollution. “Canada has the resources to act and bears a historical responsibility to the world to do so.”

“We cannot ‘silo’ climate change, making it one issue among many,” said journalist Avi Lewis, speaking for the ‘Leap Manifesto: A call for a Canada based on caring for the Earth and each other.’ “The climate is a global emergency; a message from the Earth; a lens through which to see all issues.”

“The government wants to keep discussion in a climate bubble. We want to explode the bubble, and that is what we will do in the consultations.”

Prime Minister Trudeau said in March that “we need both pipelines and wind turbines.” That is impossible, Avi said, “We have to choose.” That is shown by an “avalanche of evidence during the past week”:

Meanwhile, Avi said, the government is trying to weasel out of its pledge to implement the United Nations Declaration on the Rights of Indigenous Peoples, which specifies their right to “free, prior, and informed consent” regarding resource develop on their lands. “That means veto power! That means no Line 9 and no Northern Gateway!”

“Smashing the silo applies to us too,” Avi added. “A climate justice movement must be led by justice.” Serious climate action demands an end to:

“We need a movement of movements to unite meaningful climate action with a challenge to these social evils,” Avi concluded. •

This article was published at johnriddell.wordpress.com.