What Remains of All Our Outrage?

It’s been five years since the massive occupation of May 15, 2011 that gave birth to the movement of los indignados, known as the 15M movement, followed by five years of faltering progress with many advances and set-backs along the way – five years of a tremendous crisis, civil unrest and mass protest. What remains today after such a sustained period of outrage? 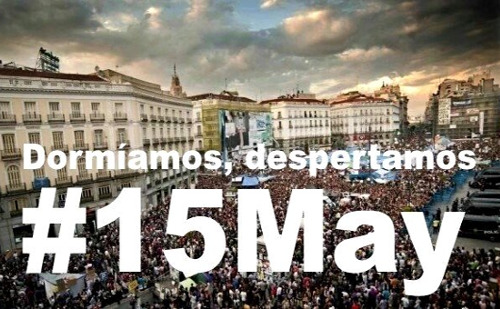 15M has changed the way we read and interpret the crisis we are facing. We were all told in 2008 that “we live beyond our means,” were blamed for the present situation; but the movement of los indignados has enabled us to change the story. One of its principle slogans, “no somos mercancías en manos de políticos ni banqueros” (we are not mere things to be manipulated by politicians and bankers), pointed us in this direction. 15M said that the banks were the authors of economic collapse, and that most of the political class was also complicit. Los indignados imposed a counter-narrative that challenged the official lie: neither guilty nor responsible, it said; we are victims of an age of corruption.

How 15M Changed the Conversation in Spain

What began as an economic crisis soon led to a social crisis; and finally, under the impact of 15M and the independence movement in Catalonia, to a crisis of the political system per se, which led people to question the founding principles of the (post-Franco) Spanish Constitution of 1978 and each of its pillars: monarchy, two-party system and our state model. This would have been unthinkable not long ago.

15M connected with the seething social discontent and helped to channel it into the form of collective mobilization, and legitimized protest and nonviolent direct actions, such as camping in public places, or occupying empty houses owned by banks, like the Plataforma de Afectados por la Hipoteca (or PAH – literally: Platform of People Affected by the Mortgage). Potentially illegal actions were now considered legitimate by a significant portion of the public. According to several polls, up to 80 per cent of the public considered los indignados were justified and supported us, despite criminalization and stigmatization by those in power. Two years after Mareas ciudadanas (the citizens’ Tide), the spirit of 15M finally made the jump to policymaking: moving from “no nos representan” to “Podemos” and the claims of “los comunes,”1 having overcome the difficulty of gaining political traction – even after pundits had accused the movement of being unable to present a serious political alternative and said that the management of our political institutions must be left to professionals.

The Impact of Electoral Victories

The emergence of Podemos came with the victory of five MEPs in the European Parliament in May 2014. This marked the beginning of a new political/electoral cycle – one that has not yet been closed, and that was further crystallized in municipal elections of May 2015 with victories against all odds, of alternative candidates in local government capitals of Barcelona, Madrid, Zaragoza, Santiago de Compostela, Cádiz… followed by the breakdown of two-party politics (in the General election) on December 20th. This political translation of outraged social unrest simply needed two things: time and strategic boldness. These successes had not been anticipated, and without the 15M movement would not have been possible.

Those stuck in “old politics” have been forced to rethink their modes of communication. Some have abandoned ties and put on more fashionable shirts, and soon all kinds of shifts became imperative and the word “change” became ubiquitous in the electoral scene. And if that was not enough, a new party, Ciudadanos (Citizens) was launched, with the aim that social unrest might be railroaded into more harmless channels.

Maybe on today’s upset political chessboard, the weakest side is the social mobilization that is necessary to any process of change. The bid for institutional participation, the setting up of new political instruments, and the sudden and unexpected victories in various city councils took place in a climate of social passivity. However, real change does not come about only through conquering institutions, but through gaining support from a mobilized society. If society does not exert pressure on governments for change, it is the powers-that-be that will – and we know whose interests they serve.

What remains of all our outrage? A regime in crisis not ready yet to fall but ready to be reconfigured. As the French philosopher Daniel Bensaïd said: “Indignation is a start. A way of standing up and beginning to walk. One becomes indignant, rebels, and then thinks what next.” This is where we are now. •