Looking the Basic Income Gift Horse in the Mouth

Both the Trudeau Liberals in Ottawa and the Wynne Government at Queen’s Park in Toronto have been making noises of late on the subject of Basic Income. The last Ontario Budget, in fact, declared an intention to carry out a pilot project in a community still to be announced. While no clear details are yet available, it is very likely that we will soon be dealing with a practical initiative that we will have to respond to. We will have to consider how we view the possibility of the Liberals moving in the direction of a Basic Income system. 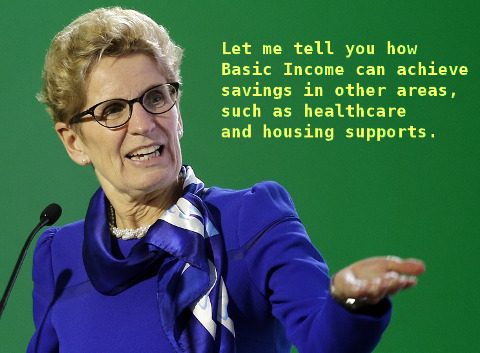 After decades of intensifying austerity and the erosion of systems of income support, with social assistance in Ontario now providing such wretchedly inadequate benefits that people are unable to feed themselves properly and retain their housing, the notion of a basic level of income that all are entitled to can’t fail to generate a level of interest and raise some hopes. However, I am convinced that a good hard look in the mouth of this particular gift horse is well advised. What are the different notions of how a Basic Income system might work? Why are governments now considering it more seriously? What form would it be likely to take in the present economic and political context?

Looking Deeper Into the Gift Horse

As soon as you start to look into the question of Basic Income or, as it was often called in the past, Guaranteed Annual Income (GAI), you are immediately struck by the ease and enthusiasm with which free market thinkers and warriors of the neoliberal order have embraced the concept. From Milton Friedman to Charles Murray, the idea has found warm support on the political right. There are some clear and obvious reasons why this is so. Firstly, the very idea of a basic level of income is about establishing a floor and right wing proponents are confident they can locate it in the basement. A low and inadequate social minimum seems to them a great way of folding in existing, relatively adequate programs so as to, precisely, drive people into deeper poverty.

Another attraction offered by a low universal payment to those who take the side of the capitalists is the potential role it could play in depressing wages. In a recent contribution to the Union Research blog on the issue of Basic Income, Toby Sanger, draws attention to the Speenhamland System, a wage supplement arrangement put in place under the English Poor Laws between 1795-1834, and the role it played in driving down wages. Low wage paying employers could rely on the tax base to pay their workers wages and employers who had been paying higher wages were under an incentive to lower them in order to obtain the same benefit. In the present context of vastly expanding low wage precarious work, this danger is one that should not be underestimated.

The right wing Basic Income agenda, however, sets its sights on more than cutting benefit levels for people in poverty and depressing the wages of the lowest paid workers. Potentially, it is a means to gut social programs and to decimate the workforce that delivers them. The notion is to use the basic payment to advance the pace of privatization enormously. This kind of payment would replace public services and all who received it would become customers shopping for their social needs in the private market. Not just income support systems, but public housing, healthcare, education and transportation are threatened by the parsimonious universal payment envisaged by free market Basic Income.

A Different Kind of Basic Income?

Of course, the political right’s version of a system of basic social payments is countered by those with more progressive concepts. There is a notion of Basic Income that stresses income adequacy, the need to advance full employment and the importance of preserving and strengthening a range of other elements of the social infrastructure. Without doubting the good intentions of advocates of a progressive Basic Income, it does need to be pointed out that the question of which version is to be adopted will not be decided by an impartial
court of the common good but by present day governments. The people running the show on Parliament Hill and at Queen’s Park have some history behind them when it comes to the implementation of measures of austerity and privatization. Their recent experience in bold new social policies that raise the living standards of working class people and increase their share of the social wealth is significantly less.

The austerity agenda, which we can trace back to the 1970s but which has intensified following the international crisis of 2008, has placed a central strategic importance on weakening the adequacy of income support programs. In addition to the massive undermining of federal unemployment insurance, provincial social assistance has been enormously weakened. People on Ontario Works (OW) and the Ontario Disability Support Program (ODSP) have seen the spending power of their income reduced by up to 60 per cent since the infamous Tory cuts of the mid 90s. Not only have income levels been driven down but rules and policies have been adopted that have made programs harder to access and more uncertain for those receiving them. The increased poverty and the climate of desperation that this attack has generated have been of central importance in ensuring an astounding growth of low wage, precarious employment in Ontario.

As the Liberals, political chameleons that they are, posture on the issue of Basic Income, we must avoid the trap of thinking that a rational and socially just approach is going to be won on the strength of good arguments. The idea that Basic Income is so sensible that everyone on both sides of the class divide will want to get behind it and make it work in the best interests of all is profoundly mistaken. If the concept is being advanced in Ontario by the very provincial government that has led the way in program reduction and austerity, it is not because they want to reverse the undermining of income support, the proliferation of precarious employment and the privatizing of public services but for the very opposite reason. They are looking with great interest at the possibility of using Basic Income as a stalking horse for their regressive social agenda and it will be the version that Bay Street has in mind that will win out over notions of progressive redistribution. As the announcement in the Ontario Budget acknowledges:

“The pilot would also test whether a basic income would provide a more efficient way of delivering income support, strengthen the attachment to the labour force, and achieve savings in other areas, such as healthcare and housing supports” [page 132].

“This is a particularly bad time for the lamb to accept an invitation from the lion to lie down.”

Social programs that have emerged in capitalist societies, especially those devoted to income support, have always been reluctant concessions. Their design, effectiveness and contradictions have reflected the prevailing economic and political situation and the balance of class forces in society. For decades, we have been fighting a largely defensive struggle to prevent the decimation of systems of social provision. We are not in a period when bold new redistributive programs are on the drawing board. The Liberals will be only too happy if we give up our fight to defend the systems that have been won in previous struggles and join them, as ‘stakeholders’ at the consultative round table. A decade of experience in maintaining an empty discussion of ‘poverty reduction’ has turned them into experts in such diversionary tactics. At the end of the process, however, if we allow them, they will put in place a version of Basic Income that will give Milton Friedman very little reason to turn over in his grave.

We are in a period when capitalism and the governments that represent its interests are increasing the rate of exploitation and reducing the level of social provision. That is not about to change and any redesign of income support systems we confront will be all about furthering, not limiting, levels of social inequality. This is a particularly bad time for the lamb to accept an invitation from the lion to lie down. Basic Income will be no panacea and the fight for income adequacy will continue, of necessity, to take the form of social mobilization against an agenda of austerity and regression. •