The Austerity Agenda in Sheep’s Clothing

As we go into the New Year with Justin Trudeau’s Liberal Government in place, it’s worth noting that the struggle against poverty in Toronto now unfolds with a complete set of federal, provincial and municipal regimes all seeking to position themselves politically as moderate if not progressive. This has particular implications and poses particular challenges in terms of effectively resisting austerity, poverty and social abandonment. 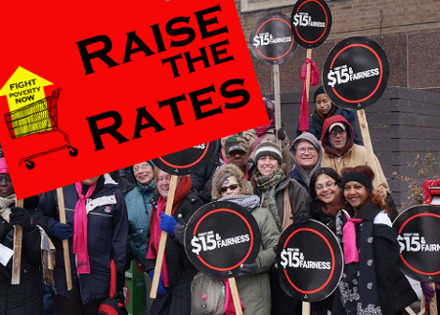 There is, of course, an implication in the last sentence I just used. At none of the levels of government we face can we seriously imagine that we are dealing with anything other than continuation and deepening of the agenda of austerity. That agenda is an escalating,
internationally determined fact of political life that we can’t seriously expect Trudeau, Wynne or Tory to break ranks with. Still, the fact that we are not dealing with hard right regimes is of considerable significance. The positive side of dealing with the more moderate austerity forces is that they don’t wish to take things as far and they are more likely to tactically retreat in the face of serious opposition. The other side of the matter, however, is that such regimes are harder to confront. They impose austerity more stealthily and have developed considerable skills when it comes to diverting potential resistance into a process of fruitless dialogue.

Because of the newness of the Trudeau regime and, because it replaces such a hated bastion of reaction as the Harper Tories, it is likely that illusions in its false progressive credentials will linger for a while. However, we begin the New Year with global markets reacting to fears that a world economy that has produced only dubious post 2008 recovery is nearing the next downturn phase. With the collapse in oil prices and an economy being kept precariously afloat by unsustainable household debt, it is likely that Canada will feel the full weight of any such development. In this situation, it’s pretty clear that Trudeau has not been put in Ottawa to broker any major concessions. He presides over a system of federal social provision that has been seriously undermined. The Employment Insurance system has been gutted, healthcare weakened, social housing all but eliminated and transfer payments toward social assistance scaled back. A movement that demanded and fought for the reversal of this enormous damage to the social infrastructure could create a major problem for the Liberals and force more from them than token gestures.

For the Ontario Government, while they have hardly faced anything comparable to the Days of Action that were directed against the Harris Tories, the ‘social justice’ mantle they have put on has already lost a great deal of its credibility. The Ontario Coalition Against Poverty (OCAP) has become well used to the Wynne Government’s ongoing game of ‘poverty reduction’ under which a never ending process of consultations is used to deflect political challenge as the Liberals deepen poverty and allow the spending power of social assistance to decline against inflation. The challenges that the Liberals have faced from public sector workers, the campaign for an increased minimum wage and the Raise the Rates campaign that OCAP has been part of demonstrate that the capacity of the Liberals to stave off social resistance to their austerity agenda in sheep’s clothing is not unlimited. Greater levels of mobilization against the Liberals’ poverty measures are perfectly possible and likely.

With the lack of openly declared party politics at the municipal level, the implementation of ‘kinder, gentler’ austerity in Toronto is a little more complex. After Rob Ford’s dysfunctional attempt at right wing populism, a sigh of relief greeted the election of John Tory as Mayor. The conservatives, centrists and soft left members of City Council have all been folded into a regime that likes to give everyone a place at the table and prides itself on an ‘inclusiveness’ that can take various forms, as long as they don’t seriously impede the twin agendas of austerity and upscale urban redevelopment.

Where Rob Ford would have insisted there was plenty of shelter space for the homeless and tried to block any measures to address the crisis on the streets, Tory plays a more skillful game. Under pressure, he opens some warming centres and drop-ins and adopts other minor measures of alleviation. He clearly places a premium on trying to reduce the risk of actual street freezing deaths, which spell political problems for him. Meanwhile, the City policy of keeping shelter occupancy at a maximum of 90 per cent continues to be disregarded and the bureaucracy works to ensure that shelter facilities are moved out from the centre of the city in the interests of redevelopment. The plight of the homeless actually becomes worse but under a regime that has the political intelligence to protect its legitimacy at the cost of some concessions.

The advantages to be gained from the ‘poverty reduction’ circus have not been lost on John Tory and his team. The approach that the Liberals put in place at the Provincial level is now being replicated municipally. The main political capital provided by this approach is that it creates the illusion that the ‘complex problem’ of poverty is being duly considered, solutions sought and the ‘stakeholders’ consulted. Through this procedure, community anger can be safely channeled, expectations put on hold and ‘solutions’ presented that don’t conflict with and even facilitate the prevailing agenda. We will wait in vain for the City to give a lead in challenging precarious work and low wages. The library system in Toronto, has cut its workforce and employs a scandalous number of part time workers. We can be sure that there will be no great desire to ensure that the City run welfare offices adopt a less restrictive approach to the provision of benefits. Any housing initiatives that emerge will be focused on facilitating upscale development, with token ‘affordable housing’ measures included and an emphasis on furthering the privatization of public housing.

At each of the levels of government, then, the above mentioned political contradiction manifests itself. They are all regimes that are relatively less able to withstand serious challenge and social mobilization and this makes it easier to win concessions from them and force them into retreats. However, their very method of operating, based on ‘inclusiveness’ and co-option, makes it all the harder to create the critical mass of resistance that makes such victories possible. In 2016, the possibility opens up that the pace and scale of austerity will make the balancing act that such regimes rely on impossible to sustain. In such a situation, we could break the grip of the fake consensus, increase the scale of the fight against austerity and poverty and win some significant victories. •