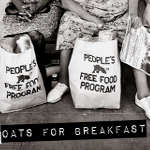 Episode 3: When the Progressive Conservative government of Mike Harris came to power in Ontario in 1995 and began implementing its agenda of cuts, the labour movement decided to organize a response. The response came in the form of the Days of Action – a series of rolling political strikes that involved hundreds of thousands of workers and community members across the province. We talk to labour activist Sam Gindin about how the Days of Action came to be organized, what their impact was, and the lessons they hold for us.