A Win for Pittsburgh Public Transit

Since port Authority of Allegheny County (PAAC) cut 15 per cent of its service, residents of Baldwin, Mooncrest and Groveton – working-class suburbs of Pittsburgh, Pennsylvania – had to walk two miles, over roads with no sidewalks, just to catch the bus. But on September 8, Baldwin residents active in the struggle of “Buses for Baldwin” and Groveton residents who pushed for service in their county housing authority will be riding the first restored buses, celebrating the sweetness of the victory.


The battle for public transit has often been an uphill struggle under both Democratic and Republican administrations at the city, county, state and federal levels. Lessons from the Pittsburghers for Public Transit (PPT) campaigns might be useful for others struggling for economic justice today and tomorrow.Amalgamated Transit Union President Larry Hanley has pointed to Pittsburghers for Public Transit as a model for those defending public transit throughout the country, especially for the ways the organization unites transit riders and workers in its campaigns.

Since the 1980s, business interests and the right wing have crusaded for even more aggressive policies of laissez-faire capitalism (sometimes called neoliberalism). Public services – won over the years through struggles by working people – have been the target of late. Their successful efforts have cut funding for public transit systems, public education, public housing, public parks and libraries, the public postal service and more.

This, combined with a push to lower taxes for the rich and stagnant or diminished wages of working people, resulted in a shrinking tax base that often made public services shabby and inadequate. Right-wing ideologues create the problem, then insist that ‘privatization’ and ‘market mechanisms’ are the solution. But this makes things worse – capitalism functions not to meet the needs of the majority of people, but to maximize profits for private business owners.

The Pittsburgh Port Authority, in consultation with an ‘economizing’ Democratic County executive, Dan Onorato, had already made severe cuts in 2007, and in 2010 approved a new 15 per cent cut in service. In autumn 2010, Tom Corbett, a conservative Republican candidate promising pro-business tax cuts and budget tightening, ran for governor of Pennsylvania. His Democratic opponent was the very same Allegheny County executive who had twice cut public transit service. The Republican won.

In January 2011, budget proposals by Gov. Corbett projected an additional 35 per cent cut in Pittsburgh’s transit service. Right-wing elements argued that transit workers had been too greedy, that public transit was inefficient and unsustainable, and that privatization would provide a solution.

At Pittsburgh’s 2010 Labour Day parade, a young member of a socialist group, the Workers International League (WIL) enthusiastically approached the Amalgamated Transit Union (ATU) local president and proposed building a coalition to help defend transit workers and the transit system. Soon after, the Economic Justice Committee (initiated by members of the International Socialist Organization (ISO), with members of the peace and justice-oriented Thomas Merton Center and other activists) became part of the effort.

The breadth of participation in PPT became one of its hallmarks. At various points, in addition to the Thomas Merton Center, WIL and ISO, those becoming an essential part of the mix included members of Solidarity, the Industrial Workers of the World, Socialist Alternative, the Sierra Club (especially concerned with environmental benefits of public transit), the United Electrical workers, UNITE-HERE, Service Employees International Union, the United Food and Commercial Workers, and especially ATU Local 85. Community groups and unaffiliated activists (including veterans of the Occupy Pittsburgh movement) also joined in.

PPT educational activities included creating a website, production and mass distribution of two attractive tabloid-size handouts, informational flyers, news conferences and opinion pieces in the local daily newspaper. Activists organized picket lines, street meetings, demonstrations and rallies with hundreds of people participating. At one of the largest protest, in June 2012, activists took part in a well-publicized act of civil disobedience involving what came to be known as “The Transit Twelve.”

The 2012 escalation inspired PPT to develop a “Transit Bill of Rights” calling for:

1. Safe, reliable and affordable public transit that is accessible to all.
2. Public transit that meets the needs of each community – no communities left out.
3. Living wages, benefits and safe working conditions to ensure dignity for transit workers.
4. Dedicated and sustainable funding for public transit.
5. Equitable distribution of public transit costs so all corporations pay their fair share.

In 2013, PPT campaigned to pressure the state legislature to halt further cuts or attacks on transit workers and transit users, and to support dedicated funding for public transit. PPT’s new full-time organizer, Helen Gerhardt, played a central role. A petition drive secured 5,000 signatures for the Transit Bill of Rights. A mass rally for public transit in Pittsburgh’s Market Square was followed by February and June actions in Harrisburg coordinated by PPT, drawing together an accumulating number of coalition partners throughout Pennsylvania. (The militant Harrisburg February action is captured in this Youtube video.)

PPT’s assertion that “public mass transit is part of the infrastructure of any healthy and metropolitan area” made sense not only to the labour movement, but also to significant elements in the business community, gaining support from Democrats, Republicans, independents and Greens, as well as socialists. A wedge was driven into the Republican administration itself, between the secretary of transportation and the extreme right-wing elements. The governor himself backed down and supported the funding of public transit (which was not enough to prevent his defeat in the 2014 elections.)

A broad coalition effort of diverse forces – spearheaded by PPT, the ATU and Transport Workers Union (TWU) Local 234 in Philadelphia – secured the November 2013 passage of Transportation Bill, Act 89, with funding that would prevent further cuts – at least for the next five years.

But damage had already been done to communities turned into ‘transit deserts’ from earlier cuts. This was the case with the working-class suburbs of Baldwin and Groveton. In 2014, with PPT’s new full-time organizer Molly Nichols playing a pivotal role, Baldwin became a focus for action. More than 30 volunteers, including PPT members and ATU volunteers, surveyed over 500 community members documenting transit needs and consequences of the cuts in the Baldwin community.

Some 80 people showed up for a meeting to launch “Buses for Baldwin,” a campaign that would be led by a local steering committee of dedicated Baldwin residents, and supported by the PPT organizer and volunteers.

The Buses for Baldwin campaign began letter-writing and petitioning efforts, and collected 1,500 signatures and helped send 40 letters to the PAAC Board. In September, more than 100 people participated in the “Walk for Transit,” a spirited march half the distance many people have to walk to catch the bus – captured in a video shared widely online. There were innumerable phone calls and letters to elected officials and PAAC community members, face-to-face meetings with elected officials and an avalanche of testimony by residents at meetings of the PAAC Board and Allegheny County Council.

“Even if it was just five people meeting with the Port Authority, we had a lot of people behind us,” Bob Ieraci from the Buses for Baldwin steering committee pointed out. “The number of people we had to make phone calls, going to meetings down at the Port Authority, sending e-mails and so on, made it a total resident win. If it wasn’t for them, this would have never occurred.”

Baldwin resident Karen Smith added, “The Buses for Baldwin steering committee is proud of all the residents who gave their time and energy to help the Port Authority understand the importance of public transit in our community.”

“The most important aspect of the campaign was the support of PPT and guidance they were able to provide,” noted Terry Breisinger, who is also on the steering committee. “We knew what we wanted, but didn’t always know how to get it. The guidance and hard work of Molly and the PPT volunteers kept us going at crucial points in the campaign when we weren’t sure where to go.”

Bus drivers played a crucial role in the campaign. From the beginning, ATU members demonstrated concern for and solidarity with Baldwin. Several members attended the community meetings, offering information and advice, as residents deliberated over how best to struggle for restoration of bus services. As Breisinger commented, “They were able to talk to the community about how the PAAC works and help the campaign focus on suggesting routes that would make sense.”

As the Baldwin Campaign got attention, a veteran ATU driver, indignant over hardships faced by abandoned riders from her discontinued bus route, connected people from Mooncrest and Groveton with PPT to struggle for restoring service in their communities. Drawing from the Baldwin model, a steering committee circulated a petition and urged residents to contact the PAAC and testify at their monthly board meetings.

After more than a year of organizing and agitating, PPT secured a significant victory. The Port Authority announced in June that four routes would be extended, including two to serve Baldwin and Groveton. The expansion in service next year will add 39 new bus drivers and 13 maintenance workers’ jobs.

This will have a real effect on people’s lives. Darnell Jones of Groveton noted, “People will be able to find jobs and get to the supermarket.” Breisinger, who is visually impaired, said, “The bus is my lifeline,“ and with restored service, “I’ll be able to take my family to sporting events or shopping for Christmas presents without having to rely on anybody else.”

Unfortunately, residents of Willett Road, in the Baldwin area, were left out of the deal, and Buses for Baldwin is determined to fight for their inclusion. The same has happened with Mooncrest. Victories can be won here too – but only through more struggle.

The Port Authority is likely to increase the base fare next year, which is another important struggle for transit riders on the horizon. This gets to the question of ‘who pays’. A popular PPT slogan has been “Public Transit Needs a Fix. We Know How: Tax the Rich.” There is need for education on the economics and injustices involved, with a detailed proposal showing how the slogan can become a reality. •

Molly Nichols and Laura Wiens contributed to this article. This article first published on the Socialist Worker website. 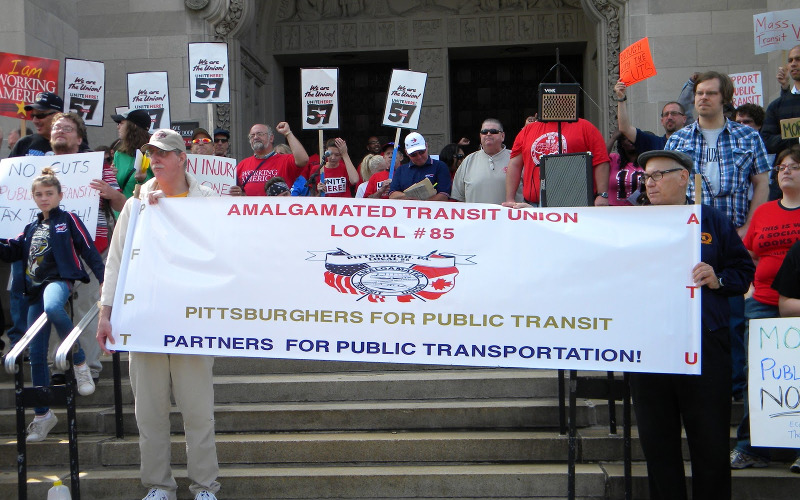 Paul Le Blanc is a long-time member of Pittsburghers for Public Transit.

Jonah McAllister-Erickson is a long-time member of Pittsburghers for Public Transit.