Syriza Youth was founded in 2013, as the youth organization of the Coalition of the Radical Left (Syriza) in Greece. This article first published on their website neolaiasyriza.gr (July 23).

The agreement reached in the months of negotiation of the SYRIZA-ANEL Government on 13 July is, beyond doubt, a huge defeat for the forces of the radical left in Greece. The unprecedented coup that lenders caused, was only the latest episode of a series of extreme coercion that led the government in a stifling political impasse. 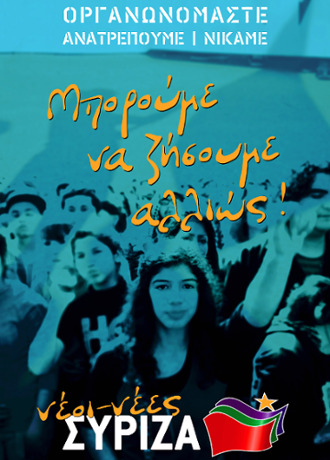 However, it would be extremely deficient on our part, to interpret the outcome of the negotiations only as a result of lenders’ options. We ought to negatively evaluate the significant devaluation of the correlations within the eurozone, the absolute belief that rational arguments could persuade the institutions to agree on a ‘win-win’ agreement, and that the threat of a Grexit could play a catalytic role in prevalence of our plan. These have contributed decisively to the absence of an alternative rupture plan that would work both in the framework of the negotiation and also as a government option, which was a determinant factor in our entrapment.

Moreover, the complacency, for a long time in technical negotiations in view of a definite ‘honorable compromise’ did not give room for the excitement and momentum that creates societal participation, against the dominance of technocrats and continued as a policy as if nothing has changed. Moreover, we did not proceeded in a series of ‘unilateral actions’ that could shift the scope of the conflict to the ‘inside’ to consolidate relations with the people we represent, give rise to new struggles and provide the necessary resources to implement our program .

Faced with this situation, the inefficiency of the party apparatus (Party and youth) was decisive. The non-convocation of the Central Committee of Syriza before the passing of the prerequisite measures (Parliamentary voting), transferred all the weight to unauthorized institutions such as the Parliamentary Group and the individual responsibility/conscience of every MP. The atrophy of the party’s leading bodies and the non-collective decisions are the two aspects of the same relationship.

The agreement signed is sealed by the smashing balance of forces within the euro zone and stained by the blackmail against the government and the Greek people. This entrapment and the impasse that has arisen, obliges us to rethink the axes and directions of this plan. We see that in the end, the EU and the Eurozone function as institutionalized neoliberalism, that constricts their limits and their transformation margins. Our internationalist strategy should pass through the release from these formations as a demand for democracy and popular sovereignty, but also as a condition for contesting neoliberalism.

The adoption of the Third Memorandum comes against our ideological origins, our election commitments, our collective decisions and reverses a long course of Syriza, with the risk to crush the hope for an alternative way to the EU’s only country where the Left achieved a historic victory. For these reasons we are against the Agreement.

Back to the Party

It is imperative, at this stage, for the immediate call to convene the Central Committee of Syriza and directly call for an Extraordinary Congress, which is the highest decision body of the party, which will have overall responsibility for the review of the previous period and design the strategy of the next interval. Moreover, Syriza has responsibility and has to protect all its members from personal attacks against them, which have nothing to do with the principles and values of the Left.

We cannot neglect the great result of the referendum. The government in this case, by choosing to give the floor to the people, managed for this short time to make the people the protagonists against the extreme blackmail, the financial crunch, the closed banks and media frenzy. The referendum as a social process and as a result, shows us that the struggle for the formation of a social ‘block’ that will open new avenues for greater democracy, cooperation and solidarity in every aspect of social life, is more timely and possibly victorious, now, more than ever.

As for us, the fight for a fairer world is not a matter of moral justification, but a way to change our everyday lives, to transform our lives and society. On this path we will continue to walk always bearing in mind that the story is a field of potentialities that we constantly strive to make feasible what now may seem unthinkable. •