Shaking Off the Part-Time Blues

Fighting for the Rights of Ontario College Workers

We’ve all followed the news that part-time, insecure employment is growing. I work at an Ontario college as a full-time library technician. Every day I work side by side with part-time employees whose jobs are the same as mine, but whose working conditions are dramatically different. Part-time workers in Ontario colleges do many different jobs – some are long-time support staff, teachers or student workers – but all have one thing in common – they work without many of the standard protections Ontarians enjoy. College employees are exempted from major portions of the Employment Standards Act that provide the most basic protections for workers in Ontario. Work breaks, statutory pay for holidays, overtime, a minimum wage, all of these rights are enjoyed by part-time and full-time workers in virtually every other sector in Ontario, from CEOs to fast food workers. College workers are one of the very few exceptions to the rule. 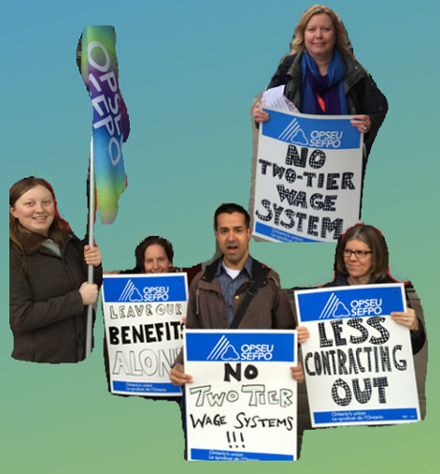 As full-time workers, we gain minimum rights and much, much more through our collective agreement – decent wages, benefits, fair use of overtime, a transparent process that preserves jobs in times of lay-off – all won through successive years of collective bargaining. Without a union, part-time workers simply do without the rights that every other worker in the college enjoys.

Everyone is More Vulnerable

In a workplace where unprotected workers have little access to fair wages and working conditions, everyone is more vulnerable. Even the limited rights part-timers have under the law are hard to access, because just one person against the boss is an uneven fight. Without the ability to negotiate a collective agreement that sets clear rules, part-time college workers are perpetual contract workers, often signing their contract the first day of each semester.

Every year part-time numbers grow – in the past 15 years, part-time workers have increased by over 30 per cent while numbers of full-time staff have
remained static. Part-time support staff currently outnumber full-time employees 2 to 1 across the province. The more vulnerable part-time workers are, the more difficult it is for us to gain ground in collective bargaining. In the interest of fairness for both part-time and full-time workers, things need to change.

In 2008, Ontario Public Service Employees Union (OPSEU) staff and activists ran the largest union certification drive in Ontario history to gain part-time workers better rights. Thousands of part-time support staff and sessional teachers cast their ballots. After four years of lawyers, hearings and barriers thrown up by the employer, the ballots of part-time workers cast were destroyed, unopened. A lot of hope and energy was invested in the unionization drive, and we learned ways to reach people that work.

Reaching people, creating room for justice and standing together are clearly the way forward. We see it in the Fight for $15, in the U.S. battles to organize retail and fast food workers, in successful bargaining for existing unions, big and small. Active organizing that gives people a voice benefits the members we have, and grows the union. Part-time college workers have long been the poster children for neoliberal employment practices in the public sector in Ontario – challenging the assumptions that lay beneath their precarious working conditions is to challenge the inevitability of shrinking expectations for us all. This makes it everyone’s fight.

The most effective tool we have is solidarity. The last attempt to organize this group of workers failed, but not because the workers lacked commitment. Four years after the sealed ballots were cast people were still regularly asking me for updates in the halls. It failed because we let the campaign fall into the hands of lawyers and out of the public eye. The labour movement can win this fight – by showing up, speaking out in public and being unrelenting in our demand for fair treatment. It worked with the Porter strike, it is working in the fight for a fair minimum wage and it can work for the 17,000 college workers who remain unorganized. When we raise our voices together, there’s no stopping us. •

Tracy MacMaster is a steward at OPSEU L561, and president of the OPSEU Greater Toronto Area Council (GTAC).