In the past weeks a few South Africans – possibly inspired by an artificially resuscitated Zulu ‘king’ who mused that it might be a good idea for foreigners to go home to till their fields – murdered seven migrants, pillaged hundreds more and scared thousands into temporary refuge camps. The vast majority of their compatriots responded in shock and sympathy with the victims. Most South African interpreters of this carnage repeated a tendency typical to that corner of the planet: exceptionalism. It might be helpful to challenge this patriotic particularism with wider global and deeper historical comparisons. 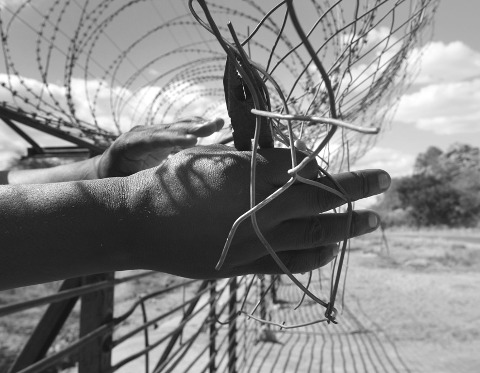 Even whilst nearly 1,000 other Africans seeking refuge from zones of war and economic devastation were drowning in the Mediterranean, South African discourse about its latest round of xenophobia remained provincial. As in the past, South Africa’s intellectuals focused on the ‘special types’ of this country’s interactions with a long history of global transformations. From the South Africa Communist Party’s (SACP) “Colonialism of a Special Type” (CST) to invocations for ‘national democratic societies’ (down a few notches from NDRs, but on a distinct detour to socialism’s road nonetheless), South Africans tend to think they’re unique.

Assuredly, South Africa’s brutal historical integration into the capitalist world took on its own colours, thus its xenophobia hinges on the collective psychosis of race and ‘Afrophobia’. But was this incorporation qualitatively different from how capital’s empire embraced the globe? South Africa’s BRICS status – one-third centre/two-thirds periphery of the world system – means we should not be surprised when many across its porous borders want to get in. Given the corruption that always seems to accompany the early stages of capitalist development and the privileged access to it held by those near a countries ‘gates’, neither should one wonder why it’s so easy to bribe one’s way across (it is slightly odd, though, how little this is mentioned in the South African discourse). Nor is it strange that some among its own disenfranchized – in more relative poverty and unemployment than ever, spawned by the vast inequalities exhibited in BRICS everywhere – fight them. Thus South Africa’s similarities with the rest of the world rather than differences from it need emphasising. This fosters better analysis than localism, which does little to escape the refuge of scoundrels and leads to bad thinking and poor policy at best but xenophobia at its extremes.

The millions of poor Africans and Asians flowing into South Africa’s townships are a small proportion of over 230 million migrants globally. Fifty-one million – nearly South Africa’s population – have escaped political conflict. Over eighty million moved to countries in the global south; just over another eighty million went ‘north’. Only slightly less than five thousand died in ‘border incidents’ last year. In spite of their difficulties, in 2011 these migrants sent around $350-billion in remittances to their families (this is an official calculation, undoubtedly low): roughly what South Africa turns over annually and nearly three times the official development aid sent from the advanced capitalist countries to the ‘underdeveloped’ world.

Latin Americans repulsed by walls and increasingly harsh laws in the states to their north, and refugees from Africa and the middle East boating to Europe via Libya – 22,000 have drowned, since 2000, making their way across the Mediterranean, paying thousands of dollars for the privilege – share similar problems added to the quotidian humiliations of eking out an existence. Waves of anti-immigrant wash the world, from the Marie Le Pens of France and the United Kingdom Independence Party across the channel (May 7’s election gaining thirteen per cent of the popular vote although only one seat), pushing mainstream parties to the lowest common denominator vis-à-vis immigration. In Greece, where Syriza battles its creditors, the neo-Nazi Golden Dawn got over six per cent of the vote in January. Canada’s right-wing government propagates anti-Muslim sentiment and has added restrictions to its Temporary Foreign Worker Programme. Australia’s concentration camps blight humanity.

Thus it’s imperative to understand the deep forces propelling these global travellers and pushing their new neighbours to unspeakable acts against them. Susan Ferguson and David McNally’s Socialist Register 2015 article attempts to unpack these global flows and their sometimes tragic consequences: “the secret of the world is hidden” there, they say, borrowing from Roberto Bölano’s 2666. A renewed phase of the “primitive accumulation” process Marx named in the mid-nineteenth century has taken root since finance capital’s release from national fetters in the 1980s. Now, as then, millions of people are torn away from their usually agricultural and ‘communal’ modes of existence to embark as a working-class in the making on the forced march to the industrializing world; then as now it was a global process; now as then the process is brutal and long.
Powder-kegs await sparks when one adds the simultaneously exclusionary and inclusionary processes of nation-state construction, the contradictions of democracy’s political equality concurrent with economic liberalism’s inequality, and massive power shifts between the world’s rising and falling state-society complexes. Nation-states include citizens in communities of civic virtue or virulent authoritarianism, but there are always those outside the borders with more or less welcoming gates. Democracies’ freedoms are contested eternally by those with more or less capital: the former think the latter’s liberty will fetter their power through parliamentary or associational fiat. And wars happen as empires fall and new ones rise. Primitive accumulation proceeds through it all.

Fifty million people left Europe during this tension-laden, three-fold process in the century before World War I: many to South Africa. Today a new wave of creative destruction unfolds, with many more nation-states struggling to cope and billions more people empowered by democracy’s legacies, hand-held cyber-communication, and cheap transport. Yet they are powerless to resist pushes away from modes of mutual obligation and pulls to the cruel embrace of the too-slowly emerging ‘labour market’. They compete with ‘nationals’ trapped in the same process as the cities’ slums fill. The longer they stay there the angrier they get. Racial, national, ethnic, and gender identities are at hand from which the angriest conjure hate.

As the Ferguson and McNally article put it, this is a global mosaic of “reserves of labour-power.” Its “cross-border movements are at the heart of the worldwide production and reproduction of capital and labour.” Since 1980 the global proletariat’s members have increased from between 1.5 and two billion to three billion – most from what was once called the ‘third world’. Guy Standing’s label of ‘precariat’ serves them well: few of them work in ways that encourage organization. They are casual labourers or in the ‘informal sector’: members of Marx’s lumpenproletariat. It’s a crude concept, but alludes to the conditions forcing many within it to crime – the least being no or counterfeit documentation and wages well below legislated minimums – often organized by masters and mistresses far up class’s ladders and far across the globe.

Perhaps ironically in South Africa, discussion of labour reserves evokes its pre-eminent special-type theoretician. Harold Wolpe’s famous 1972 “Capitalism and Cheap Labour Power” critiqued CST (colonialism of a special type) explanations of the apartheid state’s response to the crisis of segregated and migrant labour systems with more official modes of separation and perniciously racist ideology – doomed to die soon after they were committed to law. Stephen Friedman’s recent Race, Class and Power: Harold Wolpe and the Radical Critique of Apartheid contends Wolpe tried thereafter to escape Marxism’s constraints with the ‘contingencies’ of race and the state’s complexities. But today’s global apartheid amidst South Africa’s ‘freedom’, displacing apartheid’s failed attempt to control primitive accumulation in its kraals with a wider and more maleficent global mode, suggests race and politics are inextricably tied to ‘economics’. States and other organizations hoping to forestall further murderous episodes should think hard and fast along Wolpe’s lines about the disintegration of apartheid. More controls didn’t stop it. Formally employed workers desiring extended freedoms did. •

David Moore teaches Development Studies at the University of Johannesburg. He has recently published “Conflict and After: Primitive Accumulation, Hegemonic Formation and Democratic Deepening” in Stability: International Journal of Security & Development at DOI: dx.doi.org/10.5334/sta.fm.