The Paris Climate Talks and the Failure of States

The officials in charge of the United Nations climate talks say that no deal will be done in Paris in December (COP21) to avoid dangerous global warming. After preparatory negotiations in Geneva, Switzerland, this month, Christiana Figueres, executive secretary of the UN Framework Convention on Climate Change (UNFCCC), confirmed that the target set previously, of limiting warming to 2 degrees centigrade above pre-industrial levels, would be missed. Figueres had already said, in December, after a round of talks in Lima, Peru, that “the sum total of efforts [in Paris] will not be able to put us on the path for two degrees. […] We are not going to get there with the Paris agreement … We will get there over time.” This month she reiterated that the Paris talks would only “set the pathway for an orderly planned transition over time to a low-carbon society.” 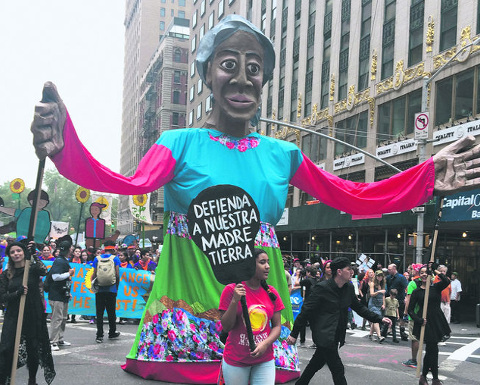 The EU climate commissioner, Miguel Arias Canete, claimed that “you cannot say it is a failure” if, collectively, the world’s governments abandoned the 2 degrees target, as long as there is “an ongoing process.”

Diplomats at Geneva put together an 86-page document for political leaders to haggle over in December. But it’s already clear that:

Massimo Tavoni of the Politecnico di Milano, who led the research, acknowledged that “there’s a lot of uncertainty” with the countries’ targets and their exact effects. What is not uncertain is the relationship between carbon dioxide emissions and warming (see “The Global Carbon Budget,” below).

Neither is there any doubt about the terrible human suffering that researchers associate with warming of 3 degrees or more. (You can get an idea from the latest Intergovernmental Panel on Climate Change (IPCC) Synthesis Report which contains frightful descriptions of the likely consequences of 4 degrees of warming. And don’t forget, there are no exaggerations here: it’s all been signed off by representatives of all countries that have signed the convention, including Saudi Arabia and other oil producers.)

This is a collective failure of the world’s large states.

In 2009 at Copenhagen, Denmark, they acknowledged the 2 degrees target – and in 2010 at Cancun, Mexico, wrote it into an international agreement – but failed to make commitments to achieve it. This year in Paris, they will abandon any pretence of concerted action, rubber-stamp voluntary “commitments,” and use the diplomatic-media-NGO circus to try to spread the illusion of progress.

Some leftists portray Copenhagen as the outcome of neoliberalism and market fundamentalism. I see it differently.

The response of the world’s leading capitalist states to the 2008 financial crash – that is, their economic policy since before Copenhagen – cannot be described as market fundamentalism. In 2009-10 the USA invested hundreds of billions of dollars to support the banking system. It deepened its symbiotic relationship with the Chinese dictatorship, that advanced industrialization and urbanization – a counterbalance to the recession in the USA and Europe – with an approach that had little to do with neoliberalism.

Of course neoliberal dogma continued to be used to bolster trade arrangements that favoured the large capitalist states, and to justify “austerity” policies. But the large states continued to intervene in the economy. What they stopped far short of was policies that might have begun to address the threat of global warming.

Plenty has been said about a “green new deal” and “green growth,” by trade union leaders and left parties among others … but measures that might enhance the transition away from fossil fuels – ending subsidies, or state-supported investment in renewable technologies and decentralized energy systems – have been pathetically inadequate or non-existent.

Instead of a carbon tax (which, if you believe global warming could or should be addressed without tampering with capitalism, is at least logical), the EU launched the ridiculous emissions trading scheme. It has failed (as predicted) to produce any discernible movement away from fossil fuel burning. There has been some investment in solar and wind power, but only insofar as it fits in to the commercial electricity system dominated by coal, gas and nuclear.

Come December last year, the U.S. and Chinese presidents, Barack Obama and Xi Jinping, agreed that the USA will by 2025 aim to cut greenhouse gas emissions by 26-28% of the 2005 level, and that China’s emissions will peak in 2030. The EU had previously set a target – which many observers believe it will miss – of cutting emissions levels by 40% of the 1990 level, by 2030. These political leaders – not neoliberals, but maybe market liberals, post-Stalinists, post-social democrats, whatever – have abandoned any effective action on warming.

The moment in the Hollywood movie, when the world’s leaders agree to overlook their differences to combat the shoal of meteors, alien spaceships, or whatever, has not happened.

Copenhagen and Paris are not failures of neoliberalism, but failures of states, and a failure of the UN, the forum for cooperation between those states set up after the second world war.

Liberal writers on international relations have long assumed that in the long run modern capitalist states led by liberals would, and should, work together. This assumption underpinned Francis Fukuyama’s argument that the universalization of western liberal democracy was the culmination of human achievement.2

At Paris, universalized western liberal democracy will complete its retreat, not before alien spaceships or shoals of meteors, but in front of a monster produced by capitalist economic growth. It’s a frightening prospect. But it could also refocus the attention of social and labour movements on the need to recreate society ourselves.

Here are three suggestions for how social and labour movements might react.

First. We should reject the false narratives being promoted around the talks … the stuff about “we” are making “progress.”

It’s worth noting what some big environmental NGOs are saying. After the Geneva talks, Climate Central reported that the Paris meetings “are being viewed [by NGOs] as an opportunity to launch a wholly new approach to global climate action […] that could do far more” than an international diplomatic agreement.

Alex Hanafi of the Environmental Defense Fund said that Paris will “put us not on an emissions trajectory for 2 degrees, but on an institutional trajectory that allows us to try to meet that goal.” For me that is false optimism gone mad.

Another illusion to be avoided is that the politicians are responding substantially to the pressure of civil society. The journalist Rebecca Solnit, commenting on the Obama-Xi deal in December, wrote: “Pressure works. The [U.S.] president is clearly feeling it, and it’s reflected in the recent U.S.-China agreement […] – far from perfect or adequate, but a step forward.” Really? I prefer Ben Adler’s sober judgment that Obama “shies away from using the levers of power” that he has. And I take Obama’s commitment as seriously as I would the promise of any politician about anything.

Second. We should reject the false narratives about technologies that tweak the fossil-fuel-based energy system but cannot produce the necessary fundamental shift away from it.

The latest favourite among politicians is a technology known as BECCS: the attachment of carbon capture and storage (CCS) technology to power stations burning biomass, instead of fossil fuels. Theoretically, if plants, trees or crops are grown to replace those that are burnt, BECCS could actually reduce the amount of carbon dioxide going into the atmosphere.

The latest IPCC report includes many scenarios that make incredibly optimistic assumptions about the spread of BECCS plants – of which there is not yet a single one in operation. (There’s a good explanation by Carbon Brief here.) To me, the whole thing looks like a way of boosting CCS (beloved of power companies who want to keep burning coal or gas on the grounds that at some point in the future they will use CCS to reduce emissions) and of forgetting about deeper-going technological shifts.

Fixes that do not involve progress on renewable and decentralized technologies should be treated with suspicion, in my view.

Third. We should do more to develop discussions on the complex social, economic and technological issues in social and labour movements, and in civil society more broadly.

The implication of the failure of states so evident in the run-up to the Paris talks is that we must broaden and deepen discussion and action independently of and in opposition to those states. In December 2013, for example, the UK’s leading climate change research outfit, the Tyndall Centre, organized a “radical emissions reduction” conference that brought together academics and researchers with activists. Why don’t social and labour movement organizations pick that up and develop it further? •

This article first appeared at the blog People and Nature.

The media circus around the climate talks generates huge quantities of numbers. These are often used to convince us that something is happening, rather than to describe things as they really are. To push past the obfuscation, a good number to start with is the global carbon budget. This is the amount of carbon (contained in carbon dioxide) that can be released into the atmosphere without spoiling our chances of keeping global warming to less than 2 degrees above pre-industrial levels.

Research shows pretty accurately that, so far, about two-thirds of the budget has been spent, almost all of it since the industrial revolution. The rate at which the economy eats up the carbon budget has risen relentlessly for the last century or so. And it will only take a further 30 years, if greenhouse gas emissions carry on at the 2014 level, to use up the budget completely.

To say that another way: starting in 1870, the cumulative total of CO2 emissions into the atmosphere is a little over 2000 gigatonnes. To have a 66% chance of staying below 2 degrees of warming, the total budget available is 3200 gigatonnes (with uncertainty of 300 gigatonnes either way).

Those numbers were examined, tested and published in October last year by a team headed by Pierre Friedlingstein of Exeter University.3 It was just the latest addition to a mountain of research. Friedlingstein and his colleagues looked at various complicating factors, such as the effect of non-CO2 greenhouse gases and aerosols, and emphasized that the dominant role of CO2 emissions, and their causal relationship with warming, is proven and measurable. A presentation by the Global Carbon Project, which cited the research, is downloadable here. Here’s one of the graphics (Fig. 1), showing how the carbon budget is being used up.

The second graphic (Fig. 2), shows how the annual total emissions of carbon dioxide rose to about 37 gigatonnes in 2014 – and that, if the IMF’s projections about economic growth are correct, and if the gentle decline in the amount of emissions per unit of economic growth continues, the world economy will by 2019 be putting 43 gigatonnes of carbon dioxide per year into the atmosphere. Much too much.

The graphic also shows the complete failure of the Kyoto protocol, which was adopted in 1997 and entered into force in 2005, to make the slightest difference.

It’s worth looking at the whole Global Carbon Project presentation, here. And there is a good explanation of the budget concept by Carbon Brief writers here.

There are a whole set of other issues – the uneven way that emissions produce warming (devilishly complex but getting clearer to scientists), factors both human-made and natural that counteract the warming effect, and the likely consequences of warming in terms of e.g. sea level rise, extreme weather events and damage to agriculture – and numbers that go with them.

Moreover, there is a fierce discussion between climate scientists about the 2 degrees target: many of them think it is too high, and that the risk of horrible consequences is already too great at 1.5 degrees.

Whatever your view of the dangers, the global carbon budget is the best measure of the speed at which the world economy is moving toward producing them, and the effectiveness (if any) of measures to slow that down and stop it. •