How About a Memorial to the Victims of Harperism?

“Only a fool would deny that millions have been the
tragic victims of communism, but that number pales,
surely, in comparison with the victims of capitalism.”

Roy MacGregor was commenting on Harper’s latest ideological propaganda foray into keeping us safe by reminding us of all the bogeymen out there on the very big, broad left. (Harper’s definition of communism is really quite loose, just look at some of his past comments on Pierre Trudeau.) Harper is building a big ugly memorial to the victims of communism on a million dollar piece of public land right beside the Supreme Court. (Could this be revenge for their decisions dismantling key pieces of his agenda?) And it is ugly, really ugly – just look at the sketches of the proposed memorial. It is right up there with the ugliest of Stalinist politically correct statues and monuments imposed across the Soviet Union before its implosion in 1991. 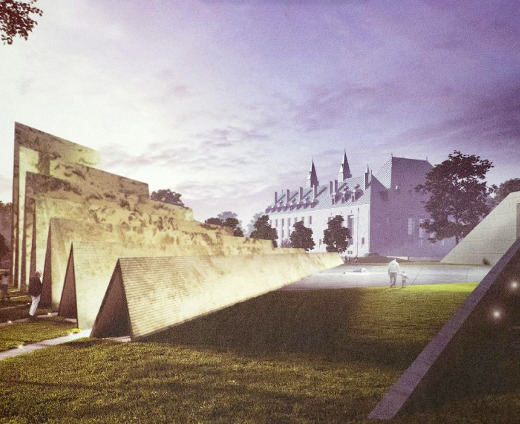 Stephen Harper would be a rather sad and pathetic figure if he didn’t hold the power of the Canadian state firmly in his grasp. This allows him to impose his folksy fanaticism on the rest of us. He is without doubt the most fierce right-wing ideologue to occupy the office of prime minister since R.B. Bennett, who in 1919 vowed to crush communism “under the iron heel of ruthlessness.” And he proceeded to do so. But Bennett had some real, tough class enemies to deal with in the days of the Winnipeg General Strike and the Great Depression. Alas, poor Stephen, born so long after his time. Today there are no dangerous communists in Canada to crush. All our prime minister has to crush are “lone-wolf, home-grown, and radicalized” terrorists: psychologically deranged individuals who tie their delusional system to mad, suicidal acts of targeted revenge at the behest of Islamic State propagandists.

The elephant in the room no one talks about, of course, is the daily reality of our military bombing IS forces and territory in Iraq. But erase the thought from your mind these “lone-wolf” attacks might be twisted, demented blowback from our military strikes. That is dangerous thinking. Soon there will be a new Harper law making such thoughts a crime, since it could be seen as somehow justifying terrorist acts. In Harperland explaining is justifying. Be safe, just denounce.

The public fears Harper is orchestrating over these “lone-wolf” terrorist “threats to our way of life” hardly measure up to the radical class-struggle syndicalism of workers in 1919 and in the 1930s, or the growing communist parties across the capitalist world in the wake of the 1917 Bolshevik Revolution. These were real, palpable threats to the capitalist system. So poor Stephen is reduced to building a memorial to the enemy he wishes he could have been there to crush. His life-long obsession with the battle against
communism, which curiously he now invokes against that capitalist gangster Vladimir Putin over the conflict in Ukraine, doesn’t allow him to be original.

There are already two known memorials to the victims of communism in the world. In 2002 such a memorial was unveiled in Prague, focusing on political prisoners. Artistically, it is
actually quite moving. Not to be outdone in exhibiting his anti-communist credentials, in 2007 President George W. Bush dedicated a memorial in Washington, D.C. It is a rather modest piece – a three-meter tall bronze rendering of the Goddess of Democracy built by Chinese students in Tiananmen Square in 1989.

Harper makes up for this lack of originality by ensuring Canada’s memorial will be very large and very expensive. The land is prime land smack
dab between the Supreme Court and the National Library. The land is worth $1-million and the memorial will cost an estimated $5-million. Harper, on our behalf, has donated the land and $3-million. A charitable trust, the Tribute to Liberty, will raise the rest. And
don’t worry if you donate and get a tax receipt. There is no way that Harper’s Canada Revenue Agency will take away the trust’s
charitable status. In an act of revenge (surely not!) Harper has donated the very land earlier plans had ear marked for a new Pierre Trudeau Judicial Building. We can all be proud. Canada will have the biggest, most expensive, and by far the ugliest memorial to the victims of communism in the world. Another first for Harper’s Canada.

MacGregor is correct to note the number of victims of communism “pales” in comparison to those of capitalism. A full account of the victims of
capitalism would stretch back at least four centuries. The number of victims is incalculably vast. Just off the top of my head, we would have to include, completely ignoring the long battle to undermine and overthrow feudalism, the following: the millions of blacks taken from Africa in the slave trade (and the slaughter of those who resisted capture and those who died en route); the vicious genocides committed against the indigenous peoples of Australia, New Zealand, North and South America, and the Caribbean Islands; the savage conquest and colonization of virtually the entire globe by competing capitalist powers fighting for resources, treasure, labour and markets; the English Civil War; the French Revolution; the Napoleonic wars;
the European revolutions of the 1830s and 1840s; the American Civil War; the incessant wars among the great powers culminating in World Wars I and II. Need I go on? Let us not have a memorial to the victims of capitalism. It would be too immense and too expensive. It would also provoke despair as we gazed upon it, contemplating the human costs exacted by the movement of history.

Let’s be more modest. After we defeat Harper let’s build a memorial to the victims of Harperism. The numbers are far more manageable, immediate and easier to grasp. Who would be included on the list? The young men and women sent to kill and die in a senseless war in Afghanistan (and those who may yet die fighting IS in Iraq). The returned psychologically and physically wounded veterans, and the many who, despondent, have committed suicide, while others face broken promises of support and help. We should not forget the prisoners who have committed suicide or retreated into madness after endless incarceration in solitary confinement. The murdered and missing aboriginal women, a systemic problem Harper chooses to
ignore. The many aboriginals who live in soul-destroying conditions without adequate water, sewage disposal, safe housing, or affordable food, and witness an epidemic of suicide among the hopeless young in their communities. How can we possibly measure and enumerate the victims of the cuts to social and health spending imposed by Harper? Then there is the lost generation of young people, searching for secure jobs and meaningful futures that no longer exist in this
dog-eat-dog neoliberal world. Every reader can add to the list. It goes without saying, in fairness, we would only count the victims since Harper came to power. A separate accounting is required for all previous prime ministers.

Harper has opened a political Pandora’s box. Let us talk about the victims of the system and let us assign blame to those who hold the power to change things either for the better or for the worse. Harper’s changes have been for the worse. •