As we enter the eighth year of the long-lingering global economic crisis, it is sobering indeed that it is only in Greece that a political party putting forward a clear, radical democratic alternative to the perverse policies of neoliberal austerity stands on the doorstep of entering the state. 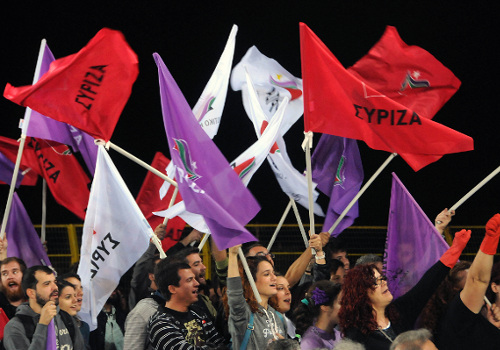 Emerging out of a coalescence of people from the 1980s Eurocommunist left and alter-globalization social movements at the beginning of the millennium, Syriza had at one point reached as much as 15 per cent support in opinion polls before 2010. But it came to the brink of power only when its new leader, Alexis Tsipras, in the run-up to the spring 2012 election proclaimed that it was Syriza’s immediate goal and duty to enter government in coalition with anybody who would join with them to stop the economic torture of the Greek people.

The policies imposed by the European Central Bank (ECB), and above all by the German central bank acting behind it, made the term Great Depression rather than Great Recession especially apt for Greece in this crisis. Unemployment was pushed beyond 25 per cent, minimum wages were cut by a third, people were cut off the electricity grid and denied basic pharmaceuticals. The rule of law was simply thrown out in terms of labour relations.

Having clung to office for two more years, the governing coalition of the old patronage parties is about to be displaced by Syriza in next Sunday’s election. What Syriza is first of all promising is that it will renege on the reactionary austerity policies. They are promising to reinstate collective bargaining and workers’ basic rights, to raise the minimum wage, to reconnect people to the electricity grid. It is a sad commentary on our times that these have become radical things to do.

A good deal of this can be done without resolving the very large question of whether Greece will continue to treat as legitimate and pay all the interest on the enormous debt that was run up by previous clientalist and, in many senses, corrupt governments, who always worked hand in glove with the very small capitalist oligarchy that runs industry, trade and finance. Syriza has costed its immediate restorative policies at some 11-billion euros, equivalent to less than 20 per cent of revenues lost through tax avoidance. Its most popular proposed revenue measure involves finally requiring the big media barons to pay license fees for the use of that very basic public resource – the airwaves.

Syriza is not saying that they want to leave the euro. They don’t, and wouldn’t be anywhere near where they are in the polls otherwise. The question is whether they can have the breathing room to undertake basic restorative policies, and to lay the ground for a longer-term economic strategy. This would entail real structural reform of the Greek state, so there could be some real democratic involvement in what’s invested and how it’s invested, so that Greece might come out of the crisis in a progressive manner.

The loans Greece has had from European Union, the European Central Bank, and the IMF in exchange for introducing such terrible austerity has not removed its heavy debt burden. The loans were mainly designed to allow for paying interest due to the bondholders, so that Greece could continue to borrow, at exorbitant rates. The insistence that a newly-elected Syriza government – which would be Greece’s first really honest, non-clientalist government – should first of all embrace the obligation to pay such interest rates to either wealthy Greek capitalists or to foreign bankers is nothing less than scandalous.

Syriza represents the first and the strongest democratic response to the bizarre deepening of neoliberalism after the 2008 crisis. Were such a democratic government to be stymied or brought down by the hostility of its domestic capitalist class working in cahoots with international capitalists and their political representatives, this would be a tragedy for democracy. It would reinforce the notion, growing ever stronger in Europe today, that the only way to protect people from the neoliberal austerity is through supporting right-wing ethno-nationalist parties.

What Syriza stands for in this context is what Spain’s newly elected Republican government stood for in the early 1930s at a time when the Nazis on the march to winning elections in Germany. For the moment – at least until Podemos reclaims the mantle at the end of this year – a democratic Greece under Syriza would represent what democratic Spain represented for the international left in the 1930s. The prospects for a different outcome are much better, provided there is strong international support for giving a Syriza government the breathing room it would need. •