Ten Points for a Trade Union Strategy Against Climate Change

Since each of us gets only a few minutes for our contributions on such a large subject as climate change, I have chosen to put forward ten brief points for a trade union strategy against climate change. Firstly, I will establish some of the important factual basis on which we have to build our strategies and policies.

1. Climate change is not a threat of the future, it is already happening here and now, it is man-made, and the consequences can be catastrophic.

2. The climate threat will have widespread implications for social development – either as a result of climate change itself, or as a result of measures to prevent or mitigate climate change. The way we live and work will thus change considerably, whether we take action or not. Inaction, or postponing action, represents the greatest threat – with disastrous effects.

4. Today’s economic growth regime and the ruthless exploitation of natural resources is an embedded part of the capitalist economy. A narrow focus on environmental policy will therefore not be sufficient. The climate and environmental struggle must be put in a wider political context. A system-critical approach will be necessary. To prevent climate change we will need democratic control of the economy – particularly energy generation and distribution. Thus, the environmental, as well as the economic, crisis, not only represents a threat, but also an opportunity to fight through important and necessary social change.

5. In this social struggle, the trade union movement will have a major role to play, because of its strategic position in society. However, trade unions are on the defensive all over the world, and they are under immense pressure from strong economic forces. Therefore, for the trade union movement to be able to assume a leading role in the fight against climate change, it has to be revitalized, refocused and reactivated. 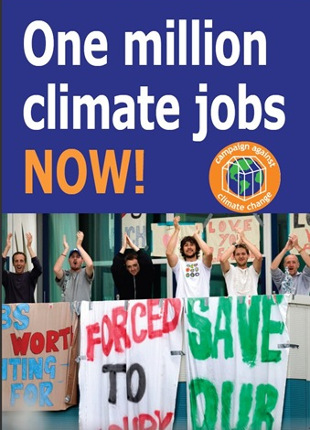 6. Climate policy cannot be reduced to a question of sacrifice, of what we must give up of our hard-won rights, as some parts of the environmental movement tell us. The struggle is first and foremost about creating a better society for all. The financing of CO2 mitigation measures must therefore go hand in hand with a radical redistribution of wealth – from the North to the South, and from the rich to the poor. Without this, it will be impossible to achieve broad support for necessary policies against climate change.

7. Preventing climate change will require extensive restructuring of our societies. Activities which damage the climate must be reduced, while renewable energy, energy efficiency and environmentally sustainable activities must be developed – in a planned and systematic manner which maintains and strengthens the social and economic security of people. We cannot accept that certain groups of workers have to bear the brunt of climate change mitigation measures through unemployment and marginalization. The transition has, in other words, to be just – and to be just, it has to be planned and managed in a democratic way. All serious research has shown that necessary policies against climate change will create more jobs than it destroys. This has everything to do with workers’ power in the labour market, of shorter working hours and how we distribute the necessary work in society.

8. Transition to an environmental sustainable society has many advantages. Thousands of new jobs in public transport, renewable energy, house retrofitting and sustainable industry will be created. A reduction of greenhouse gases will also lead to less polluted workplaces and communities. Increased democratic control of the economy will reduce competition and pressure at the workplaces. Less stress, strain and mental pressure will be important effects of such a development.

“The climate struggle is about democratization of the economy and society, redistribution of wealth, the free use of our common knowledge”

9. The market-based solutions to the climate crisis, primarily through carbon trade, which have been promoted by governments and strong vested economic interests, have so far failed. Neither will global summits save us. To the degree that we have achieved increased social equality, decent work, poverty reduction, gender equality, etc. in our societies, we have not done so through global summits. We need binding international agreements to save the climate, but to achieve that, it is necessary to mobilize social forces for alternative solutions built on solidarity, equality and people’s needs. Governments and multinational companies proved at the last COP 19 in Warsaw that not only were they not able to move forward, they actually took a step backward. Thus, they have had their chance, and they have failed. It is time for others to take over.

10. Therefore, to succeed in this social struggle, we need to build long-term, broad popular alliances. This has particularly to happen between labour and the environmental movement. The climate struggle is about democratization of the economy and society, redistribution of wealth, the free use of our common knowledge – without patent barriers. To save the climate, we must change society. Only then can we create the necessary conditions for a better life for all – including our descendants. •

This contribution was made at a Rosa Luxemburg Foundation/Left Labour Project meeting in New York, 18 September 2014.