“Should Scotland be an Independent Country?”

It was hard not to remember the 1995 Quebec sovereignty referendum as one walked the streets of Edinburgh in August. The Yes (Yes Scotland) and No (Better Together) sides campaigned relentlessly everywhere: tables in the streets; posters; TV ads; constant references during many Fringe performances. The city and the country were polarized. An 18 August poll gave the yes 45 to the No’s 55 among decided voters, with the Yes closing the gap as the undecided vote, dropping from a high of 25 to 14 per cent, was breaking two-to-one in favour of Yes. 4.2 million are eligible to vote (everyone 16 and over). The Yes already has a pro-independence letter with a million signatures. 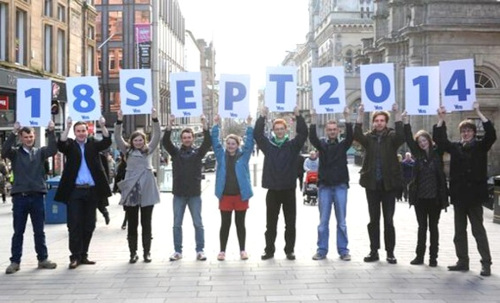 The referendum became inevitable, given recent political developments. The United Kingdom’s half way house – devolution of some powers – had not deflected the drive for Scottish independence. Two referenda on devolution were held. In 1979, though a majority of voters in Scotland supported devolution, the numbers failed to reach the required 40 per cent of the electorate. The 1997 devolution referendum was successful and the new Scottish Parliament was elected in May 1999, with some powers over income tax, education and health. In 2007 the Scottish National Party (SNP) became a minority government, pushed aggressively for a referendum but failed to win the consent of a majority of members. The experience of devolution seemed to speed up the growth in the popular conviction that independence was the next logical step. In 2011 the SNP won a majority government and immediately began preparing for a referendum.

The Drive for Independence

Without denying the great differences that exist, there are remarkable similarities between the drive for independence of the Québécois and Scottish nations. Both were conquered militarily by British forces. New France was conquered in 1759. The nascent and increasingly assertive Québécois nation was re-conquered in the bloody suppression of the Patriotes in 1837-38. Both nations were repeatedly sold out by their élites who made common cause with the conqueror in exchange for a pot of gold and a second-class place at the banquet table. The popular classes were deeply embittered by both the defeat and the betrayal.

Scots will immediately disagree, insisting Scotland was never successfully conquered. There is some truth in that. Repeated efforts at conquest by England failed in the endless Wars of Scottish
Independence, resulting in victory for Scotland in 1314 at Bannockbarn leading to the first Parliament in Scotland in 1326. The Highlands were not easily subdued (the Romans failed), even by an alliance of lowland Scots and English forces until 1746 at Culloden. The defeat was total and the savage aftermath ensured the Highlands would never rise again in resistance: mass executions of the leadership and transportation of warriors to the colonies; the legal suppression of the clan system, the tartan and the Gaelic tongue; stripping the entire population of arms. But the Highlands were never completely subdued until the Clearances, involving dispossession from the land and forced emigration to the colonies. Sheep with wool to feed the Industrial Revolution replaced humans on the land. The remaining population scratched out an existence as crofters, while providing a ready source of cannon fodder for the British military machine and cheap labour for the new factories in the south.

The conquest England failed to achieve by force of arms was finally achieved by stealth and bribery. The Acts of Union – passed in London in 1706 and in Edinburgh in 1707 – created Great Britain. There were violent popular demonstrations against the union in Scotland. Even the government’s own spies reported 80 to 90 per cent of the population was deeply opposed. Nevertheless Scotland’s Parliament approved the measure. This was a Parliament elected by far less than 5000 eligible voters (this is an 1832 figure; it would have been much lower in 1707; property qualifications for the vote were high) in a population of approximately 1.3 million. Immediately upon passage, martial law was imposed by a fearful ruling class. Later evidence revealed huge cash bribes were paid to Members of Parliament to secure a majority. This betrayal became a recurring theme in popular song and verse up to the present day.

Clearly, both nations husband many historical grievances within their collective psyches. Independence remains an alluring dream for both.

There are other similarities between the two referenda. The Yes and No echo similar themes to win the population.

The Yes campaign is positive, upbeat. An independent Scotland will see significant economic growth, more jobs, higher per capita incomes. The national project will be unfettered by the heavy hand of the central government. For this first time since Union, Scottish interests will come first. An independent Scotland will reject the cuts to the National Health Service (NHS), social programs, and pensions. (The devolved Scottish parliament has already sheltered Scots from the worst of the NHS cuts to prescription drugs and eldercare.) There will be no nuclear weapons on Scottish soil. The UK Trident nuclear submarine base will therefore have to go. The Scottish military will be small (hence freeing revenues for other social purposes), and troops will only be deployed in UN sanctioned engagements. SNP First Minister Salmond asks Scots to ignore the “scaremongering and fear-baiting” of the No campaign and to embrace a positive vision of an independent Scotland’s future. The Yes side’s economic arguments perhaps carry more weight than similar arguments in Quebec. Ninety per cent of the UK’s North Sea oil lies in what will be Scottish territorial waters. 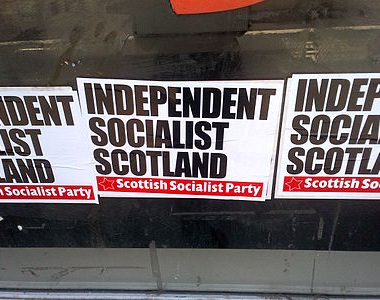 The No side admits they studied the 1995 Quebec referendum, adopting the same play book, dubbed by the SNP as “Project Fear.” Independence will be followed by a seven year depression, massive unemployment, and cuts to health and social programs. UK civil servants in Scotland will receive pink slips. Scottish goods will face boycotts in the remaining UK. The national debt will be unsustainable. There will be no currency union. North Sea oil faces rapid depletion and will not provide the expected revenues. The banking system will be in crisis. An independent Scotland might not be welcome in the European Union (EU) and NATO. As one comedian put it, the only thing not included is the claim that motorists will be forced to drive on the right side of the road. There are also a few positive gestures from the No. UK Prime Minister David Cameron begged, “we want you to stay… the UK will be deeply diminished without Scotland.” Further, he promised, a No vote would be followed by further devolution of significant powers.

The biggest difference is the Scottish No’s fear campaign does not echo the hand-wringing hysteria of the No side in Quebec and Canada. There are no claims that a Yes victory would not result in negotiations. The vote would not be recognized by Ottawa and the rest of Canada. A simple majority is too low a bar, and could never be accepted. Therefore a Yes victory in 1995 would have created a major political crisis. In the Scottish case, the UK government and the Scottish Parliament have reached a clear agreement. If the referendum gains a simple majority for the Yes, then negotiations to effect the separation would commence immediately. Scots will enjoy dual citizenship. Negotiations will be tough but reasonable, respecting international precedents and law for peaceful roads to independence.

Herein lies some lessons for the next referendum in Quebec (yes, there will be one, it is inevitable). Quebec sovereigntists should adopt a clear, simple question like the one accepted by Scottish nationalists. And Ottawa and the provinces should agree that a simple majority provides a democratic mandate and will be followed by negotiations to effect the separation of Quebec. •