Real Democracy and the Capture of Institutions

The Dynamic Reorganization of the Spanish Left

It is no longer enough to win over civil society, occupy public spaces, take to the streets, carry out symbolic actions, prevent evictions, or to win plebiscites. In Spain movements for ‘real democracy’ are setting a course to capture institutions – albeit with the aim to recreate these institutions in a constitutive process in the interests of ‘real democracy’. 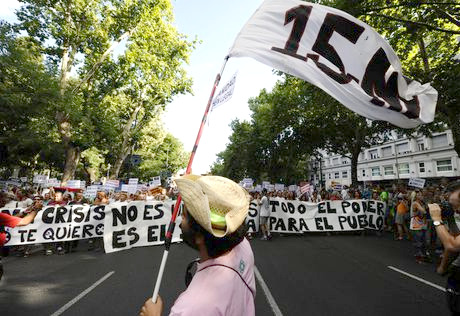 We are witnessing a dynamic reorganization of the political sphere – from the left. Even before the European parliamentary elections at the end of May a shift was evident that would bring the Izquierda Unida (United Left, IU) party a tripling of its votes. It now has six members in the European Parliament in Strasbourg. The real surprise winner however is the platform Podemos (We Can) that came out of the protests against the crisis with its top candidate Pablo Iglesias. Only four months after its foundation it achieved a result that gave it five delegates.

Podemos is a cadre party with charismatic leaders, but it emerged out of the movements occupying public spaces. As such the alliance is an example of a new ‘shared leadership’ within the movements, which does not assume any previously established leadership or avant-garde status. Instead it allows for individuals or groups to temporarily take on a leadership function, in order to move things forward and to concentrate activities on a provisional focus.

Splintering or a Convergence of the Left?

Are we now witnessing a further splintering or a convergence of the Left? A few hours after the European elections Podemos offered, “all forces genuinely opposed to austerity” a process for convergence. This appeal was directed toward parties such as IU, the green party Equo, but also toward the social movements. Alberto Garzón from IU, himself one of the Indignados of 15 May, and at 28 years old the youngest member in the Spanish parliament, has no doubt that a
convergence with Podemos is coming: “We agree on most positions.” He has assumed leadership of his party’s sonorous secretariat “for a constitutive process and convergence” so as to advance the rapprochement.

For many the United Left is still one of the traditional parties. It possesses organizational structures, committees as well as hierarchies. Though it is by far more democratically structured than the conservative Partido Popular (PP) or the Spanish Socialist Workers’ Party (PSOE) and many regional parties, it has nevertheless not been able to seriously challenge the two-party system during the past 40 years. Indeed in several municipalities and regions the IU is also a governing partner. As a result a clear distinction with the other parties was not always apparent. In the past, cases of corruption also occurred. In the meantime however these cases have been dealt with and the people in question have left the party. And much has happened since. The party was also transformed by the dynamics of the 15M movement. A new generation is taking over, reforming the party from within and approximating the democratic forms tested in the movements.

This is how the IU tripled its support, in particular with those who identify with the Left and are active in the trade union movement and
the corresponding Mareas – the waves of protests in the healthcare and education sectors and elsewhere – to take one example. Many
disappointed supporters of the PSOE are also present. This potentially accounts for up to 20 per cent of the population.

“Podemos occupies a field that the plural left has not understood how to reach,” according to Garzón. Among these he includes in particular
those who no longer expect anything of the political system and have turned away from the traditional parties. The structure and language
of Podemos have made it possible for their voices to be heard, and to translate frustration into protest. Were it otherwise, these
primarily young, urban and university educated individuals may have been lost to the Left. In contrast the IU maintains a stronger connection to the popular classes in poorer urban zones as well as in
rural regions. Together the IU and Podemos could bring on the collapse of the two-party system.

This is also supported by polling. In a recent survey by El Pais, Podemos comes in at 15.3%, the IU at 8.2% while both the PP and PSOE register declines. If we take seriously another survey by EL Pais, unpublished most likely because of its inconvenient results, the two
left-wing parties combined sit at 27.4% ahead of the PP (26.5%) and the PSOE at 17.5%.

And yet this is where the problems begin. Similar to the Greek Syriza a relative majority in an electoral victory would not be sufficient to
form a government since the opposition Socialists are out of the question as a coalition partner for the moment. Indeed, as the PSOE
elected its new chairman it decided explicitly against a course that would correspond with the demands and political forms of the movements. Instead it selected the 42 year-old Pedro Sánchez, until
now a relatively unknown functionary, who explicitly distanced himself from Podemos and IU. He orients himself on Felipe Gonzales who in view of the menacing danger from the left calls for cohesion among the established parties.

Such opinion polls additionally foster a dynamic that is difficult to calculate. The media hype around Podemos now concentrates many forces
on the new formation. This fosters rivalries and dissociations toward a ‘party of the old type’ such as IU on the one hand, and toward a ‘fuzzy post-political entity’ such as Podemos on the other. Many see convergence as an imperative precisely in order to
bundle the different forces into a left-wing mosaic. Yet being able to endure the tensions between movements, parties and trade unions,
or between diverse (party) formations appears to be too strenuous for many. This is all supposed to be new and as such perhaps old mistakes
are only being repeated. Given its success, some members of Podemos consider it to be the prominent actor with no need for cooperation with the traditional oppositions. The danger of self-fragmentation looms. 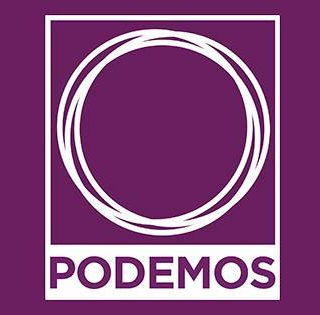 As such the future of Podemos is uncertain. The party is still grappling with adequate organizational structures that can maintain the platform format and openness without simply becoming a traditional
party. At the same time ‘inner-party’ democracy is not yet really developed – the process is dominated by strong leadership figures. The latter, above all the figure of Podemos’ Pablo Iglesias is circulated by the media. It is to be hoped that the media hype does not end in the same way as it did for the Pirate Party in Germany.1 Nevertheless the conditions for success are much better. In the end Podemos is not purely a media phenomenon, but is sustained by the new mass movements. Yet neither the success of an organizational consolidation, nor a convergence with the Left is assured.

It is still a long way until the elections at the end of the coming year. In contrast, the capture of institutions is already conceivable with the local elections in May 2015. The most spectacular is an initiative arising from the movements. After Ada Calou, the spokesperson of Plataforma de Afectados por la Hipoteca (PAH, Movement against evictions), became one of the figureheads of the crisis protests in Spain, she launched a new project. She is one of the representatives of Guanyem Barcelona (Win Barcelona), a citizen initiative, which emerged at the end of June in Barcelona and which proposes a radical oppositional candidacy for the mayoral elections in 2015.

The initiative is broadly conceived. It is directed initially toward the unorganized majority in society, to those active neither in movements nor in parties; though its base is located in the organized neighbourhoods and movements. Guanyem also succeeded in bringing (almost) all the political organizations of the Left and the trade union confederations of CCOO and (partially) UGT on board. “We do not exclude anyone – apart from the regime parties,” says Colau.

PAH is already an example of such a mosaic. Activists from every type of organization have been working together here for years in a social network for mutual aid. The constitutive parts are local units in which activists do not simply discuss politics, but moreover share everyday practices. That is to say, they fight evictions, launch political initiatives, occupy banks, re-appropriate housing, organize collective childcare, etc. Yet they do not limit themselves simply to offering help, they are themselves sites of political action, organization and education.

Yet this does not suffice. Even the opinion poll results for Podemos and IU are not enough. Guanyem wants more. “We want to win, that is the biggest difference. And to win you have to combine efforts. Anyone who steps up alone represents an exercise in pretension,” according to Colau. “We do not aspire to a seat in the municipal council just to provide a bit of colour there. We want to win to change things and to prove that politics can be fundamentally different.”

The example is catching on. Not only in Catalonia. All over the country new platforms or alliances are forming to contest local and regional elections, as in Madrid and Malaga, where Podemos, IU and Equo, supported by movements such as PAH or Mareas (the protest waves) and others, develop common positions, programmes and electoral lists; and not in backrooms but in open assemblies and through innumerable discussions.

With this strategy the solid institutions of power, in particular the central government, are not yet reached. Yet municipal or regional governments have sufficient authority to undertake much more in housing construction and tenant rights, in the design of public spaces or in the healthcare system. They can ensure that no one falls out of the health system and can shorten waiting lists by making more resources available. They can prevent evictions or at the least make alternate housing available. They can prevent privatizations at the municipal level or even reverse them. They can promote the collective and democratic organization of social infrastructure and create institutional support for movements. And they can act where no competencies exist by breaking rules and challenging power.

Finally such local alliances can work against the (self-) fragmentation of the Left and create the basis for a dynamic, which with the elections for the Spanish parliament leads to the end of the two-party system and to the initiation of a constitutive process for real democracy. •

This article was originally published in Neues Deutschland on August 9, 2014. Translation by Sam Putinja.