Economists continue to celebrate the free movement of goods, services, and capital. However, faced with slowing economic conditions in core countries, it is now third world growth that is highlighted as proof of the gains from unregulated globalization. As the United Nations Conference on Trade and Development points out:

“The crisis and its fallout have accelerated the trend toward a greater role of developing countries in the world economy. Between 2006 and 2012, 74 per cent of world GDP growth was generated in developing countries and only 22 per cent in developed countries. This is in sharp contrast to their respective contributions to global growth in previous decades: developed countries accounted for 75 per cent of global growth in the 1980s and 1990s, but this fell to a little over 50 per cent between 2000 and 2006.” 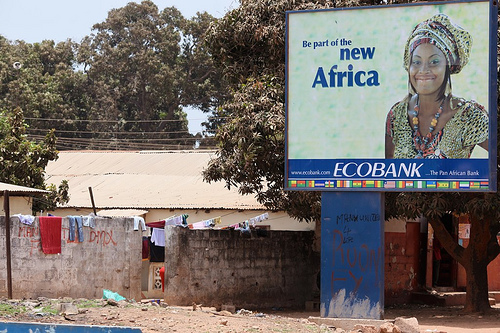 Africa, in particular, has become the new toast of investors. A 2011 African Development Bank report celebrating the rise of the African middle class offers the following reason:

“Strong economic growth in Africa over the past two decades has been accompanied by the emergence of a sizeable middle class and a significant reduction in poverty. Also rising strongly has been a robust growth in consumption expenditures as a result of this growing middle class.”

Estimating the Growth of the Middle Class

“Since then the estimated number of middle class Africans has been arbitrarily set at 350 million, sometimes delivered as the more dramatic sound bite ‘one in three Africans.’ The African Development Bank goes on to explain that, given their higher revenues from salaried jobs or small business ownership, and the ensuing economic security, ‘Africa’s emerging consumers are likely to assume the traditional role of the U.S. and European middle classes as global consumers’.”

Marketing is everything, well almost everything. There are two big problems with this growing celebration of African progress and the free trade process said to be responsible.

The first problem concerns the African Development Bank’s definition of middle class. The Bank defines the middle class as those with a daily consumption of between $2 and $20 in 2005 PPP (purchasing power parity) dollars. At the lower end we are talking about a U.S. life style based on a yearly expenditure of $730! It takes quite a stretch of imagination to see that as a middle class life style.

It turns out, according to Bank statistics, that 61 per cent of Africans still live below the $2 a day poverty line. Approximately 21 per cent more live just above that amount, between $2 and $4 a day. The Bank, while including them in the middle class, also calls them a “floating class.” If we are being honest we would have to acknowledge that after decades of growth, more than 80 per cent of Africa’s population still struggles with poverty.

Moreover, as Enaudeau also points out:

“Also sobering is the geographical dispersion of the African Development Bank’s middle class: most of the African upper middle class (spending $10-$20 per day) lives in North Africa, which does not bode well with all the talk of frontier markets stimulated by a new white collar generation south of the Sahara.”

The second problem concerns the forces driving Africa’s recent growth. Africa remains highly dependent on the export of primary commodities. China’s massive drive to export manufacturers has turned the country into a major consumer of primary commodities, pushing up their prices and serving as Africa’s main source of growth. As the Asian Development Bank explains:

“Developing Asia became a major commodity-consuming region during the last decade, turning the region into a net commodity importer. Its relative importance has increased even more since the 2008-2009 global financial crisis started, as the economies of the major industrial countries slowed significantly…

“The PRC’s share of consumption of agricultural products, such as oilseed soybeans, doubled over the past decade, driven by a change in diet to foods richer in oil.”

Unfortunately, growth based on the export of primary commodities tends to create few jobs. Take Nigeria as an example. As Jumoke explains:

“While the last decade was marked by higher economic growth, the unemployment rate actually increased from 5.8 per cent in December 2006 to 23.9 per cent in January 2012. Note that this number measures the percentage of workers actively looking for work, and does not include the rate of the chronically unemployed who have stopped looking, and the underemployed working poor. Tellingly, the poverty rate actually doubled over the last five years and now affects 112 million Nigerians, meaning that 112 million Nigerians are consistently without food, clean water, sanitation, clothing, shelter, healthcare and education.”

Moreover, the steady decline in U.S. growth has meant a decline in Chinese exports to the United States and a fall in key commodity prices (see chart). Thus, Africa’s boom, such as it was, appears nearing the end.

Relying on market forces is not going to do it for Africa, or for that matter Latin America, whose growth was also fueled by primary commodity exports to Asia and is now declining, quickly undermining the economic gains of the past decade. As the Wall Street Journal reports:

“A decade long commodity boom in Latin America that lifted millions out of poverty is showing signs of fatigue, as fading demand in China hits consumers and corporate earnings from Bogotá to Brasilia.”

If economists are looking to the third world to lead the way growth-wise, we are all going to be disappointed. •

This article first appeared at Reports from the Economic Front.