Time for Canada to Honor its UN Obligations Toward Palestine

July 9th, 2014 marked a critical landmark for the Palestinian struggle against Israeli Apartheid as it marks the International Court of Justice (ICJ) opinion on the Apartheid wall in the West Bank as being illegal under international law. One year after the decision on July 9th 2005 the united Palestinian call for a movement of Boycott, Divestment and Sanctions (BDS) was issued. Every day the urgency to build a pan-Canadian movement in solidarity with the Palestinian people, and to force the Canadian government to end its complicity in Israeli Apartheid is crucial as we have seen in the past days the brutality of Israeli aggression from air strikes that left 27 Palestinians dead in the last week, and more than 600 arrests.

This is why on July 9th, 2014 a group of trade unionists, reverends, professors, artists, and students have renewed our call to build a movement to end Canadian complicity through a campaign for Boycott Divestment and Sanctions.

Ten years ago, the International Court of Justice (ICJ) ruled illegal Israel’s massive separation wall that runs alongside and inside the Palestinian territories. 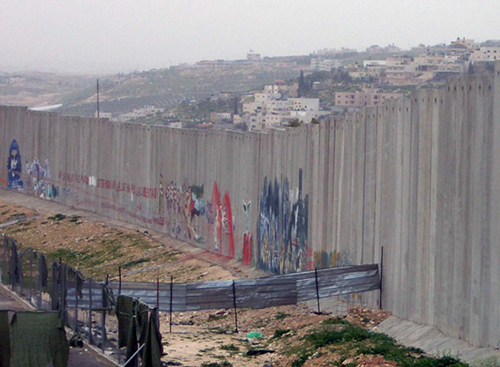 On July 9, 2004, at the behest of the UN General Assembly, the ICJ, legal arm of the United Nations, indeed issued an Advisory opinion saying “the construction of the wall (by occupying power Israel), and its associated regime (imposed on the Palestinians), are contrary to international law.”

The ICJ Advisory deemed that “Israel cannot rely on a right of self-defense or on a state of necessity to preclude the wrongfulness of the construction of the wall.”

Its ruling called for the barrier to be removed, for residents to be compensated, and for UN member States, including Canada, to act to obtain Israel’s compliance with the Fourth Geneva Convention (GCIV) – of which Canada is a signatory.

Behind the Wall, a Land and Resource Grab

Israel’s Wall does not follow the Green Line between Israel and the West Bank. Rather, it goes far inside the Palestinian Territory, protecting illegal Jewish settlements, expropriating precious Palestinian water and farm land, and isolating some Palestinian cities and towns.

This important anniversary highlights two opposing trends on the Israel/Palestinian conflict. The Harper government and Israel aim at annexing more Palestinian territory while maintaining a withering occupation and siege. Conversely, the UN, world civil society and a growing number of States are striving for diplomatic solutions to end the occupation and restore the human rights of the Palestinians.

Israel, the occupying state, bears responsibility to end the conditions fueling the violent conflict – whose most recent victims have been a number of Israeli and Palestinian youths brutally murdered.

The GCIV covers the protection of civilians in time of war, and imposes specific obligations on occupying powers as regards population transfers, education of children, destruction of property, and medical services (Articles 47 to 78). For example, Article 49 states that an occupying power cannot forcibly deport protected persons, nor can it transfer parts of its own civilian population into occupied territory.

In other words, Israel violates the Geneva Convention by building Jewish settlements inside the Palestinian West Bank, and then using the Wall to annex settlement lands into Israel proper.

The ICJ Advisory and the Global BDS Campaign

The BDS campaign demands Israel end its occupation and colonization of all Arab lands, dismantle the wall, recognize the fundamental rights of the Arab-Palestinian citizens of Israel to full equality, and respect the rights of Palestinian refugees to return to their homes and properties under UN Resolution 194.

Growing Involvement of Unions and Churches

The U.S. Presbyterian Church voted recently to divest from Hewlett Packard, Motorola Solutions and Caterpillar – on the basis of their record of complicity in the oppression and denial of human rights of Palestinians. The United Church of Canada approved in 2012 a limited boycott of Israeli goods made in the Occupied territories.

BDS targets business, security, military, cultural and academic relations with Israel. The Economist reported this year that BDS “is turning mainstream” as “some European pension funds have withdrawn investments” and “some large corporations have cancelled contracts.”

Last week in Liverpool, Unite, Britain’s largest trade union (1.4 million members in all sectors), voted to join the BDS Campaign. Delegates condemned “the persecution” and “ethnic cleansing” Israel inflicts on the Palestinian people, “the torture of children,” and “the racist laws” aimed at Palestinian citizens of Israel.

As Israel continues to build new Jewish settlements in the Occupied Territories, it draws more vocal criticism from the United States and the European Union. The EU is also ratcheting up pressure: Spain and Italy recently joined France, Germany and Britain in advising their citizens not to invest in Israeli settlements.

In line with the UN, both the U.S. and the EU regard Israeli settlements on occupied land as illegal. Spain declared the settlements “constitute an obstacle to peace” and hinder efforts to end the Israeli-Palestinian conflict via a two-state solution.

Canada and Quebec were leaders in the boycott, divestment and sanctions movement against South African Apartheid. It’s time the Canadian government joined in the BDS Campaign and threw its weight behind the 10-year-old ICJ call to dismantle Israel’s Wall and restore Palestinian Human rights. As Naomi Klein says, “it’s long past time.” And, last but not least, Canada needs to genuinely and fully support the search for a diplomatic solution to the festering, decades-old Israel-Palestine conflict. •