Free Transit: Three Reasons It Is an Idea Whose Time Has Come

On January 1, 2013, Tallinn, the capital of Estonia, became the largest city in the world to make mass transit free for its residents. While the effects of having done this are, of course, specific to the context of the city itself, it has shown that a major city can do it and that it has been widely popular with its residents. It has also focused attention on a growing international movement of groups, activists and parties who feel that free mass transit in major urban areas is an important social and environmental goal to be worked toward in the near future. 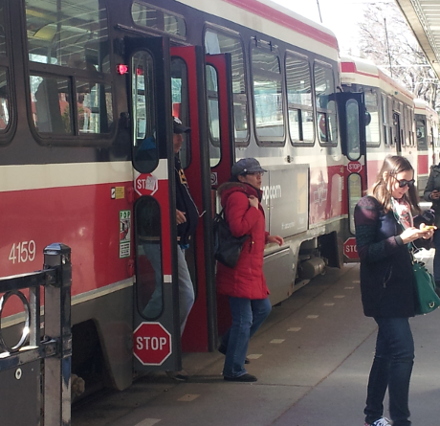 In a culture such as ours, where cars are very deeply entwined with notions of personal identity and freedom, and where the right has convinced people (falsely) that government can afford to do nothing of any significance, free transit seems at first, no doubt, like utopian nonsense to many. But given the enormous amount government invests in subsidizing the infrastructure and gas that cars rely on, and given the environmental and social equality issues involved, this is not the case at all.

Free transit is an idea whose time has come and there are three truly significant reasons it needs to be front and centre as an ultimate objective in any left municipal agenda in Canada.

The Environment and Fighting Car Culture

It is impossible to overstate the devastating and ongoing effects that cars and fossil fuels have on the environment. A United Nations report released on March 31, 2014, painted a dire picture of the predicament we have gotten ourselves into globally and without immediate and drastic action it is only going to get worse.

Even setting future climate change aside for a moment, air pollution caused by cars is killing people in very large numbers right now. A University of British Columbia study in October, 2013 showed that car pollution causes the premature deaths of 21,000 Canadians annually; nine times as many as are killed in car accidents. [Ed.: more recent report from the Toronto Medical officer.]

Writing yesterday in The Guardian, Desmond Tutu went so far as to call for an Apartheid-style boycott of the companies responsible for climate change and of the fossil fuel industry. He directly called for the ending of the massive government subsidies of fossil fuels that occur globally.

In Canada these subsidies to gas and energy consumption amount to $26-billion annually, which means that 4 per cent of all government revenues were spent on them. This is a staggering fact. It also clearly shows that claims that government lacks the money to finance expanded, adequate and free transit in major urban centres are simply not true. When one factors in possible dedicated revenue streams like tolls, gas taxes or taxes on luxury vehicles, or the possibility of a dedicated income tax increase on people with incomes over a certain level, there is absolutely no reason that free transit is not a quickly achievable goal.

Our governments and parties lack the political will and have prioritized energy consumption, including fossil fuel consumption, as well as catering to the perceived needs of car driving voters, ahead of transit.

Car culture, admittedly, is deeply engrained in Canada. It is also clear that steps have to be taken now to change that. Free transit would play a direct and obvious role in getting people out of cars and onto transit and in changing our collective perceptions of how to get to work, schools, the grocery store and recreation.

Since Tallinn introduced its experiment in free transit one of the most pronounced benefits of the first year has been a large increase in ridership in an outlying neighbourhood with high population density and poverty rates. This makes sense. Free transit would be an obvious way to incorporate neighbourhoods with high poverty rates or population densities that are detached from the overall economic and cultural life of the city into the fabric of city life as a whole.

Museums, art galleries, cultural or political events, parks and waterfronts and so many other essential parts of the urban experience would be there to visit at no cost in fares. Fares can add up. A family of two parents with three kids in Toronto, for example, wanting to go to its iconic High Park on a weeknight or to the Art Gallery of Ontario (which unlike the park is not free) would pay $16.80 for the round trip by Toronto Transit (TTC). That is a substantial addition to any outing.

For workers whose incomes are already stretched to the breaking point by substandard and poverty level minimum wages, these kinds of fare levels are directly and demonstrably a contributing factor in social exclusion.

Beyond opening up the city to neighbourhoods excluded from full participation in it, the reverse is also true. It would open up neighbourhoods that few visit to new possibilities to host cultural or artistic events and to become destinations. This has profound potential economic benefits.

This is especially true when free transit is made a central component of transit expansion overall so that not only are fares free, but the routes are there to make the free fares effective and worthwhile.

Free transit has a real role to play in issues of economic justice and income inequality. As we have already seen, our government spends vast sums of money to subsidize fossil fuels and car usage. This does not even include the money that must be spent by municipalities and governments on the infrastructure cars require.

These subsidies are made at the expense of those on lower incomes and those living in poverty. Directly. They use government funds that could be utilized by transit and any number of other programs to fund and facilitate a lifestyle choice that is of far greater benefit to the middle class, the upper middle class and the wealthy. In this sense they represent a redistribution of government revenue from those of lower incomes to those of higher ones.

Even the International Monetary Fund noted that “subsidies were expensive for governments, and that, instead of helping consumers, they detracted from increased investment in infrastructure, education and health care, which would help the poor more directly.”

One way that those on lower incomes and living in poverty can be more directly helped is free transit! As one Tallinn resident put it, “I live on a tight budget since I don’t have too much work right now. I need to save money wherever I can, so I’m very happy with the free public transit scheme. This is a good thing for the common person.”

Transit fares, for those who have work, cut into these often substandard, poverty wages themselves in the daily commute to work. Free transit would facilitate the search for better jobs (or a job at all) outside of local neighbourhoods and would allow all of those using public transit to keep more of their income by choosing free public transit as opposed to driving or having to pay daily or monthly fares. It would be especially beneficial for those on fixed incomes or relying on social assistance. We should not underestimate the impact that this can have on the daily lives of millions of people.

It is also an issue of basic fairness. For many decades urban residents who could not afford to or who chose not to commute by car have been subsidizing those who did. They have been made to pay higher and higher fares on in many cases inadequate and overcrowded transit infrastructure while the priority has been given to cars, even in spite of the environmental repercussions of this. Most Canadian governments and municipalities have shied away from the use of tolls or the imposition of car pooling lanes, essentially facilitating the singularly destructive act of driving wherever one wants, whenever one wants, on one’s own. This has to change.

There are other reasons free transit makes sense. It would end the need to police fares and the daily confrontations between transit workers doing their jobs and some transit riders. It would signal a shift in our society’s priorities. It would also, like free health care, be inspiring and transformative of how many look at the role of government and it would be very hard for even reactionaries to fully reverse once put in place in major cities.

Very recently the Coalition of Progressive Electors in Vancouver, one the country’s largest municipal political formations, voted at a policy conference to make free transit a plank of their upcoming municipal campaigns. By doing so they have taken an important idea out of the ‘fringes’ and put it into the civic discourse of the country’s third largest city.

Hopefully this indicates a shift in thinking that will ripple through left-wing and progressive parties and municipal candidates from Calgary to Toronto to Montreal and to Halifax. A shift that will help to begin to make free transit the priority for our movements that it needs to be. •

Socialist and political activist. Loves cooking! Blogger for rabble.ca and others. Check out his blog theleftchapter.