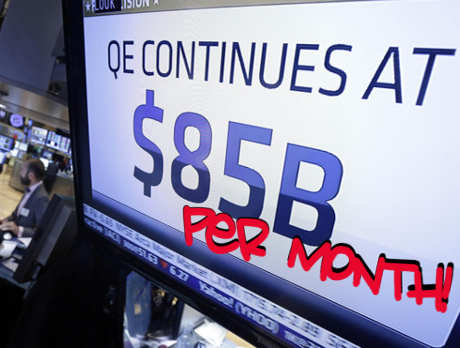 Even worse news was from Japan which, though caught in a recession of its own for a very long time, had withstood this particular post-2008 recession better than the other advanced capitalist countries because of substantial government expenditure. In Japan the growth rate in the third quarter halved to what it had been in the second.

Still in the Grip of Crisis

The United States was also expected to perform better than it has been doing for long. The Chairman of the Federal Reserve Board, Ben Bernanke, had even talked about a possible winding up of “quantitative easing,” which refers to the purchase of government bonds by the Federal Reserve to pump money into the economy (to the tune of $85-billion per month) to keep the long-term interest rates down for stimulating activity. But the recovery has not been up to expectations and Bernanke himself has gone back on his word: “quantitative easing” is to continue for much longer. The incoming Chairman of the Federal Reserve Janet Yellen in her “confirmation hearing” before the senate committee also indicated that “quantitative easing” would continue into the future because the U.S. economy and its “labour market” were still performing “far short of their potential” which is a euphemism for saying that the U.S. is still caught in the grip of crisis and is saddled with massive unemployment.

In Britain, the Bank of England expects the economy to grow by 1.6 per cent this year, a respectable figure no doubt in these dire times. Nonetheless the overall picture for the advanced capitalist world is captured by the Financial Times, not known for its radicalism, in the following words: “prosperity will prove elusive without action to establish a sustainable pattern of global demand.”

What is remarkable is that this setback to recovery has occurred even in the midst of a period when the “tide of cheap money,” to use an expression of the Financial Times in the context of “quantitative easing,” “is lifting all boats.” The moment this “tide” ebbs, the recession will get strengthened, because a lot of potentially bankrupt businesses, which have been kept alive because of the “forbearance” of the banks that are awash with liquidity at present, will then go under. The advanced capitalist world thus is in a situation where despite “cheap money” its recession is worsening, but without “cheap money” it will worsen even further.

The Role of the Banks

Why has “quantitative easing,” while keeping the system afloat, not caused a recovery? This is because the money pumped into the economy by the Federal Reserve has disappeared into the banking system, but the loans of the banking system that constitute the means through which the level of aggregate demand in the economy expands, have not increased. The banks have held on to excess reserves or made some changes in their balance sheets, in consequence of which some of this money has spread itself all over the capitalist world, including entering third world economies to sustain currencies like the Indian Rupee, the Indonesian Rupaiah, the Brazilian Real, and the South African Rand. All this however has not increased expenditures and hence the level of world aggregate demand.

An example will make the point clear. If American banks enter, say, India, if not directly then at least indirectly via a chain reaction of balance sheet adjustments, to buy Indian equities in the stock market, then this may help in sustaining the present level of India’s current account deficit, and hence in preventing the cut in world demand that would occur if India curtailed its level of activity to curb its deficit; but it does nothing to enlarge the level of world aggregate demand.

The reason why banks do not increase loans to expand the level of expenditure and aggregate demand is because the private sector in the capitalist economies, in particular in the economies of the advanced capitalist countries, are already in so much debt that they do not wish to borrow more for the purpose of spending. They would rather pay back their debts and thereby improve their balance sheets than increase their debts for the purpose of spending more, even for adding to the stock of their assets, i.e. for undertaking investment.

What this means is that monetary policy which refers to the intervention of central banks has become totally inconsequential for combating the current world recession. The short term interest rate which is typically the instrument used by monetary policy is almost zero in the advanced capitalist world; hence it cannot be lowered any further, and cannot play any further role. This was indeed the reason why “quantitative easing” was introduced: the idea was that since the short-term interest rate had lost its bite, central banks like the Federal Reserve should try intervening through the long term interest rate by directly purchasing long-term government bonds. But even this, as we have seen, has become useless for expanding the level of activity.

This leaves fiscal policy as the only possible instrument left for combating recession. But the use of fiscal policy is precisely what is frowned upon by finance capital. Countries of the European Union have to adhere to certain limits, with regard to their fiscal deficits relative to the GDP, under the Maastricht treaty. The Americans have been pressing Germany, a country with a current account surplus, to expand its domestic absorption, and implicitly accusing it of being “nationalist” for its refusal to do so. Even the Financial Times editorial quoted earlier, makes a plea for an expansion of Germany’s internal demand. But any such expansion will require an increase in government expenditure, which international finance capital will dislike.

If such an increase in government expenditure occurs through a larger fiscal deficit then the opposition will be open and direct; and in any case such an expansion will violate the provisions of the Maastricht treaty. If such an increase in government expenditure occurs not through an increase in the fiscal deficit but through larger taxes on the rich (government expenditure financed through taxes on the poor will not serve the purpose of increasing aggregate demand anyway), then the opposition of finance capital will be more subtle and indirect, such as what the François Hollande government that has embarked precisely upon such a course, is facing in France, with its credit rating getting down graded because it has shown the effrontery of increasing taxes on the rich.

When it comes to the United States as a possible source of fiscal stimulus for enlarging world demand, there are even bigger problems. Since it is an economy with a massive current account deficit, such an increase in government expenditure, apart from being anathema for finance capital, will also be opposed by domestic public opinion on the grounds that it would worsen the current account deficit. It would invite the charge in other words that America is borrowing more from the rest of the world for the purpose of generating greater employment in the rest of the world. A fiscal expansion in America could possibly overcome such domestic opposition if it was accompanied by some protectionist measures, so that the government could claim that it is spending more in order to generate more American jobs. But that certainly cannot be to the liking of international finance capital, for it would mean the end of neoliberalism. Besides, given the bitter political struggles within the U.S. over fiscal policy which has already caused a government shutdown once, to expect a fiscal expansion from the U.S. is utterly unrealistic.

It must also be remembered that the scale of fiscal expansion required to pull the capitalist world economy from its current morass will have to be quite substantial. As the example of Japan in the third quarter of the current year shows, even with robust government expenditure its growth rate has halved because of a decline in the stimulus from exports and domestic consumption. To offset the sluggishness from the latter two sources, the increase in government expenditure, in Japan and elsewhere, will have to be even greater. This is a pipe dream in the current atmosphere of austerity.

Since none of the advanced capitalist countries is in a position to undertake larger fiscal expansion individually, only two other possibilities remain: one is a coordinated fiscal expansion by all of them in unison which is an idea that had been mooted during the Depression of the 1930s but shot down by finance capital. The opposition to such a proposal today, when finance capital itself has acquired an international character and hence even greater clout than it had at that time, would be far stronger.

The second possibility is for individual governments to undertake fiscal expansion within national boundaries, i.e. behind protectionist walls, with the promise to enlarge domestic employment, which could gather domestic political support for such an agenda. This however entails a reversal to post-war Keynesianism, a throwback to the past, which is precisely what the process of globalization of finance has succeeded in overturning. Globalized finance will vehemently oppose any attempt to “put the clock back.”

It follows that no matter which way we turn, global capitalism appears to be in an inextricable situation. A new “bubble” upon which it has pinned its hopes could pull it out of the morass in which it is stuck; but there is no sign of it as yet. Monetary policy which is an instrument that finance capital approves has become ineffective. Fiscal policy which could conceivably have an expansionary effect is disliked by finance capital. The situation therefore is quite desperate. And it will become even more desperate if, as is not unlikely, segments of it such as the Eurozone get trapped into a state of deflation. •