First Nations Fight Against the Frackers

After facing months of protest led by the Mi’kmaq people of the Elsipogtog Nation in New Brunswick, the frackers of Houston-based Southwestern Energy Co. (SWN) have left the province and announced they won’t be back before 2015. 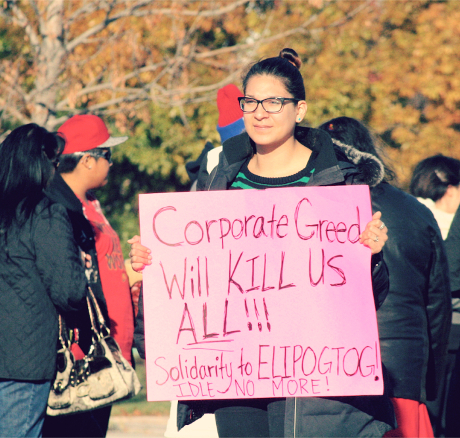 SWN said its teams had finished seismic testing and provided no timeline for when – and if – it would return to begin fracking for natural gas. The demonstrators who took a stand against fracking are glad to see SWN leave – and will now prepare to protest if it decides to return. Suzanne Patles, a Mi’kmaq woman from Nova Scotia who has been part of the protests since June told Al Jazeera America: “They’re probably hoping that morale and the movement will slow down. If the company is gone, everybody is going to strategically plan out their actions.”

The Mi’kmaq people and their supporters carried out regular blockades of Highway 11 through New Brunswick, setting up an encampment along the highway and blocking the road with human chains, burning tires and more. The direct action protests led to a series of confrontations with the Royal Canadian Mounted Police (RCMP), which set up checkpoints throughout the area. In court, SWN claimed that every day it was unable to conduct testing in the area cost it $54,000.

SWN’s announcement that it was leaving New Brunswick came immediately after the call from the First Nations’ movement Idle No More for protests across Canada on December 2 in solidarity with the Mi’Kmaq people’s struggle for their land.

The actions included roadblocks, solidarity protests, banner drops and more across Canada, including Vancouver, Winnipeg, Victoria, Toronto, Hamilton and Montreal. In Vancouver, activists were able to shut down the port for an hour until a police assault dispersed them. In a statement to the media, the Vancouver activists wrote:

“We condemn fracking, which has earned its shameful reputation poisoning water and boosting carbon emissions around the world. We decry the brutality of the RCMP response, and their ongoing collusion with corporate interests. We stand in solidarity with Land Defenders everywhere – from the Mi’kmaq in New Brunswick to the Unis’tot’en in British Columbia – who are fighting rampant and reckless resource extraction, which is the face of modern colonialism. We denounce the assertion that this destruction and the associated corruption, deceit and violence are necessary. And today, we shut down a key piece of the infrastructure of this ideological machine. #ShutDownCanada. ”

The Mi’kmaq people have been fighting these battles for years, but now, the broader movement is building support among labour, the environmental movement and other indigenous struggles. Also, Natives in both the U.S. and Canada have been resisting the Keystone XL pipeline. As one statement put it, “If the Keystone XL pipeline is allowed to be built, TransCanada, a Canadian corporation, would be occupying sacred treaty lands as reserved in the 1851 and 1868 Fort Laramie Treaties. It will be stopped by unified resistance.”

On November 19, Lake Huron Regional Chief Isadore Day, Windawtegowinini announced, “We have determined that 60 per cent of mining resources in Ontario are located on [Anishinabek Nation] traditional lands…First Nations must take the lead and have a say in what happens in their traditional and treaty territories. I’m calling on my fellow treaty Chiefs; it’s time to formally assemble, design and organize our interests as a treaty organization specific to issues like mining.”

What is Driving this Continuing Colonial Project?

Capitalism survives only through constant expansion – a fact that dates from the earliest phases of the development of capitalism as a system, as Karl Marx pointed out in Capital Volume 1, discussing the foundations of capitalism in North America:

“The discovery of gold and silver in America, the extirpation, enslavement and entombment in mines of the indigenous population of that continent, the beginnings of the conquest and plunder of India, and the conversion of Africa into a preserve for the commercial hunting of black skins, are all things which characterize the dawn of the era of capitalist production.”

In his book Roots of Oppression: The American Indian Question, Steve Talbot makes a similar point:

“The European conquest of North America, and, later, U.S. westward expansion across Indian lands, had its origin in that brutal process Marx termed the ‘so-called primitive accumulation of capital’: the seizure of another people’s land base in the interest of colonial powers’ ruling elites and for the purpose of generating capital, by transforming that land base into large-scale private property.”

Talbot goes on to explain how the experiences and struggles of African Americans and Native Americans are linked.

“The original or primary accumulation of capital in the United States was at the expense of both Afro-American and Native American peoples. The enslavement of millions of Africans provided a vast source of labour for super-exploitation, while the genocidal disposition of the Indians provided the soil on which the Afro-Americans were forced to toil. Thus the fate of these oppressed peoples is linked in history, although in different ways, to the accumulation of great wealth of U.S. capitalism.”

This process was accelerated during the period of industrialization in the mid- to late 19th century, when more and more minerals and resources were needed for unfettered capitalist development. The ruling class needed to develop an ideological justification to maintain support for the stealing of Native lands. That included propagating “manifest destiny” – the idea that whites had the “right” to take over the whole of America, from the Atlantic to the Pacific.

Racist ideas about indigenous peoples thrived during this era, where even the “liberals” of the time saw it as the duty of the white man to “civilize” the Natives and assimilate them into white society. That meant not allowing Natives to speak their language, practice their religious ceremonies or have access to many of their food sources. They were also forced to accept economic and social forms that benefited capitalism, like private property and the nuclear family.

Broad acceptance of racism against Natives allowed the U.S. and Canada to move Natives onto isolated reservations, where they would “die off.” Pressure forced the U.S. government to give Natives citizenship in 1924 and some form of self-governance in 1934. But many Natives opposed these moves because they were imposed by the federal government, and tribes weren’t given the power to create the societies that they wanted and that they had in the past.

The termination policy was driven by the post-Second World War economic boom, which required large amounts of new resources to expand the economy. Many of those resources were to be found on Native lands. Also, the U.S. was in an arms race with the former USSR, and reservations that had previously seemed to be wastelands were now considered valuable because of uranium deposits that were useful to the U.S. war machine.

But this policy had the unintended effect of bringing Natives from many different tribes together in urban centers to develop organizations like the American Indian Movement. Urban natives tried to reconnect with their homelands and called on the government to reexamine treaty rights. This naturally raised the role of the environment in a capitalist society, as author Chris Williams explained:

“The separation of nature from humans is the ideological position underlying capitalist orthodoxy; namely, that the biosphere is a subset of the economy, rather than the other way around. Capitalists can freely take ‘natural resources’ from outside of the economy as inputs, and dump waste from the production process back into the environment as outputs.”

The current attacks on Natives in Canada and the U.S. are part of this history of capitalism and colonialism in North America. Though the times have changed, the situation is similar – today, the leading issue is energy companies seeking to do “exploration” on their land. Corporations and the government will use poverty and unemployment rates to seal deals with tribal leaders. These agreements, typically shrouded in secrecy, are often horrible, and provide little benefit to the community. The effects are often unknown until it’s too late.

Then the corporations use Natives to work in coal mines, uranium mines and more on their own homeland with very little protections on wages and health. An example of the consequences can be seen on the Navajo reservation, where uranium was mined after the Second World War, and the rates for stomach cancer are about 15 times the national average. In some areas, the frequency gets as high as 200 times the national average.

There have been some examples of tribes overturning deals with companies – such as the Northern Cheyenne, which used the legal argument that the U.S. is breaking its trust relationship by purposefully misleading tribes.

Corporations like SWN are following the same pattern in their drive into Canada. They want to exploit the land for big profits, with little if any of the benefits going back to the tribes. This formula is the same as the past, where the exploitation of the land has gone hand in hand with the exploitation of a people.

On both sides of the border, the Canadian and the U.S. governments have violated treaties, not followed through on promises, or haven’t fully paid out (or paid at all) on resource contracts on Natives lands. As environmental writer Martin Lukacs wrote for the Guardian:

“Indigenous peoples may have the law on their side, but they don’t have the power. Indeed, while Indigenous peoples’ protests have achieved important environmental victories – mining operations stopped here, forest conservation areas set up there – these have remained sporadic and isolated. Canada’s countrywide policies of ignoring Indigenous land rights have rarely been challenged, and never fundamentally.

“Until now. If it’s only a social movement that can change the power equation upholding the official’s stance, then the Idle No More uprising may be it.”

Elsipogtog has shown us that people power is the only power that energy companies will yield to. It’s important for activists everywhere to understand that the genocidal assault on Natives that was vital for the development of capitalism is still underway in the exploitation of these lands.

Fighting for Native American liberation means challenging a system that puts profits over people and the planet. •

This article first appeared at Socialist Worker. Ragina Johnson contributed to this article.