The Future We Don’t Want

The “green economy” was one of the central issues debated during this year’s International Labour (ILO) Conference in Geneva. Business, workers and governments discussed “sustainable development, decent jobs and green jobs.” It is doubtless an achievement to have sustainable development on the ILO agenda, but the framing of the discussion was out of step with the aspirations of many unions and social movements. 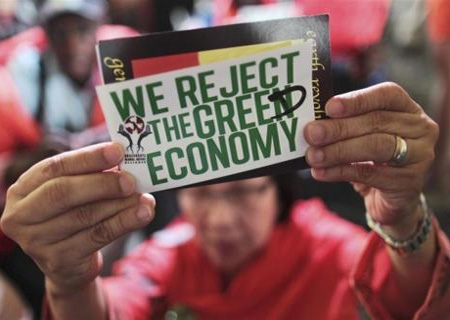 In Geneva, UNEP’s “green economy” framework was again the starting point for the discussion. Its main premises were the cornerstone Report V document. These premises were debated during the annual conference: market-based mechanisms, privatization strategies and corporate-led policies, that it is believed will lead to the creation of decent and green jobs. The results of the discussions in the tripartite Committee on Sustainable Development, Decent Work and Green Jobs (made up of worker, employer and government representatives), now contained in provisional Record 12 of the Committee were much better, in terms of language.

The conclusions are based on decent jobs, sustainable development and just transition, while green and greening were de-emphasized (the record shows that, during the June committee sessions, these concepts were debated but without much consensus being reached.) Nevertheless, the neoliberal framework is still there. The final resolution was watered-down and it will probably be open to further negotiations that unions should continue to pay attention to.

The ILO discussions show on the one hand that there is resistance to green economy and its market tools, as well as it is recognized that decent jobs and a just transition should be pillars for sustainable development. But on the other hand, there is still the same menu of false solutions, and it is clear that production and consumption models are not to be discussed. In the framework of UN negotiations, it seems that what is being discussed is who is going to lose and who is going to win based on the existing model of production and consumption, and that just transition is just a secondary road. The market-driven, finance-dominated and fossil fuel based economy goes unchallenged.

The ILO is an institution, according to its mission statement, which “is devoted to promoting social justice and internationally recognized human and labour rights, pursuing its founding mission that labour peace is essential to prosperity… Its tripartite structure provides a unique platform for promoting decent work for all women and men.” The trade unions may still be willing partners to these objectives, but clearly the corporations are merely using the ILO to promote a neoliberal agenda – and UNEP’s “green economy” is merely an extension of that agenda, operating behind the protective screen of “sustainable development” and “green and inclusive growth.”

UNEP will also have to address the fact that “sustainable development” is seriously ill. Fracking is the rock-star of the moment, and fossil fuels show no sign of running out. And while the green economy proposal is still being presented as the alternative for the future, it is the frackers and drillers who dominate the world’s energy markets.

Rejecting the ‘Green Economy’ of the Marketizers

Social movements and unions from the South did not accept the UNEP framework during RIO+20 in 2012 and there remains rising opposition to it today. After intense discussions among unions and social movements in the months leading up to Rio+20, a passionate debate occurred on the floor of the 400-person Trade Union Assembly on Labour and the Environment just prior to the official talks. The statement issued by the Assembly clearly emphasized the need to “ensure that the Commons, energy and natural resources, are brought and kept under public ownership, securing their public preservation and administration with social control.”

By adopting this language, the Trade Union Assembly was also asking important questions, such as: Who is going to use the energy and for what? And what about climate change? And how can ‘development’ ever be truly sustainable?

Unions and social movements reached consensus on the need to reject the “green economy” of the privatizers and marketizers, and agreed to promote the commons, real sustainable development, and participatory and radical democracy. This program is still a work in progress and needs further work and commitment. Even with all its shortcomings, the People’s Summit in Rio showed at least, “The future we don’t want.”

Unions and social movements can break with the feeling of inevitable failure. Alliances are much needed to reinforce the discourse of commons and democracy, to act where decisions are being taken, at national or regional level. Maybe it is time to change the focus – while we continue monitoring negotiations – and reaffirm that the cost of inaction is higher than action. We just need to decide where and how to act… we face a huge challenge! •

Maité Llanos is an Advisor to the Secretary of International Relations at the Central de Trabajadores de Argentina (CTA).