German voters are heading to the ballot box on September 22. The re-election of incumbent chancellor Angela Merkel seems certain. The latest polls saw her Christian Democratic Union (CDU) party at 42 per cent, a 16 per cent lead over the social democrats. What is less certain, however, is with which party the conservatives will form a coalition government. Their current partner, the liberal Free Democratic Party (FDP), scored 14.6 per cent in the last elections but is at risk to fail the 5 per cent threshold that parties have to pass to send deputies to the German Bundestag.

A majority for the incumbent coalition between conservatives and liberals is further aggravated by the formation of the anti-Euro party, Alternative for Germany (AfD). According to polls this new party doesn’t stand a chance to gain seats but may take just the number of votes that the current government would need for re-election. Also unknown are the fortunes of the libertarian Pirates party whose main focus is free internet-access. At this point, the party only scores 2 per cent of the vote but the lingering NSA-surveillance scandals might win them a few more votes on election day.

If the liberals don’t make it into the Bundestag again, or the combined liberal-conservative vote falls short of a majority, the conservatives will most likely form a coalition with the social democrats (SPD) like they did from 2005-09 in a ‘Grand Coalition.’ Social democratic frontrunner Peer Steinbrück, who served as finance minister under Merkel in the past, said he wouldn’t do this again but it is widely assumed that he will either change his mind or make room for somebody else to form a new government. There are also speculations about a coalition between the conservatives and the Greens (Die Grünen), but chances for that actually to happen are pretty low. A coalition between social democrats, the Greens, and the Left Party (Die Linke) may become possible arithmetically but all three parties said they’d not be interested.

Until now, the election campaign has been more than lame. Neither complicity of the Merkel-government in NSA-spy-activities, which reminds many Germans, notably in the former German Democratic Republic, of much hated STASI-activities, nor a major military-procurement scandal over the Euro-Hawk, a drone project, got the campaign off the ground. Commentators and pollsters agree that the number one topic that will determine election results is the one that nearly all candidates try to avoid – the unresolved euro crisis. A majority of Germans feel they did much better during the crisis than southern Europeans but many think that they are already paying for the debt in these latter countries or will have to do so in the future.

The following article, originally published in the German monthly, Sozialistische Zeitung, looks at political debates about the euro-crisis and their possible impact on the upcoming elections.

The fear of losing one’s social and economic status and the distrust of EU institutions and international financial markets, which have greatly increased since the outbreak of the euro crisis, are the raw material for the construction of the electoral bases of right-wing populists such as Nigel Farage in Great Britain and Frank Stronach in Austria, but also for far-right figures like Marine Le Pen. Yet, the losses suffered by Geert Wilders’ Freedom Party in the last Dutch elections show how short-lived these successes can be. Researchers assert that a substantial electoral potential for right-wing populists and for parties of the extreme right exist in all European countries. This electoral potential however has not yet been welded together into a political bloc. 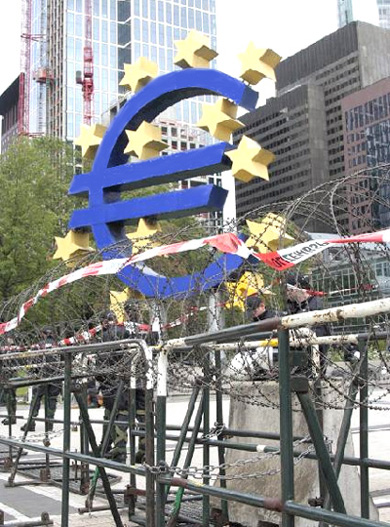 The new political party Alternative for Germany (AfG) represents a further attempt to score political capital from the euro crisis. Yet the AfG does not represent a rallying round shrilling self-made men such as Stronach, or ideologically hardened party leaders like Le Pen and Wilders, but rather around the no-name economist Bernd Lucke, who has taken a leave from his professorship at the military academy in Hamburg to build the party. Among the supporters of the AfG one finds a number of other economists, among them the repeated anti-euro plaintiffs Joachim Starbatty and Wilhelm Hankel, former ministers, medium-sized industrialists, managers, writers from newspapers such as the Frankfurter Allgemeine Zeitung, Die Welt and Junge Freiheit, as well as the Handelsblatt columnist and former employer association president Hans-Olaf Henkel.

In short, AfG supporters are a troupe of almost exclusively male academic populists holding high positions and of advanced age. They see themselves as far removed from populist sloganeering and mass rallies as from the backroom machinations of the mainstream parties. Reason and rationality reign supreme in the AfG. No sooner was this alternative party formed than it already sported an academic advisory council. The intellectual and journalistic profiles of its members probably shed more light on the political orientation of the AfG than its electoral programme. In just two pages the latter sets out the core demands of the AfG as entailing: the dissolution of the European currency union, the transfer of power from the European bureaucracy to national parliaments, the rejection of tax-financed bailout programmes, the simplification of the tax system and strict adherence to the debt brake.

The euro-critical demands of the AfG are found in similar terms on the political Left, whose relationship to the EU and the euro is just as contested as the Right’s. In contrast, the financial policy demands of the AfG are completely in keeping with the neoliberal line of the Troika (EU, IMF, ECB) and the national governments of the Eurozone. Right-wing populist tones occur only in short passages about family and integration policies, in which the family is declared to be the “nucleus of society” and an end to “disorderly immigration into our welfare system” is demanded. The transition to corresponding claims and demands by the centre-right CDU/CSU and the FDP is nevertheless fluid. Neither neoliberalism nor right-wing populism define the AfG, but rather its unshared advocacy for a disbanding of the Eurozone. This demand is absent from any of the other parties hoping to make it into the Bundestag in September.

The academic advisory council comes into play with regard to the justification of the anti-euro stance. The economists clustered there derive their political-economic concepts from Ordoliberalism. This school of thought with the obscure name is perhaps better rendered as: American capitalism with Prussian characteristics. It provided the political compass with which Conrad Adenauer and Ludwig Erhard steered West Germany toward an economic miracle after the 1948 currency reform. The theoretical groundwork was provided already in the 1930s by a group of economists around Walter Eucken who wanted to disassociate themselves from the different forms of state interventionism pursued by the Soviets, the Nazis and the American New Deal.

After the war, and with the more marketable name “social-market economy,” Ordoliberalism was put into action against the dangerous machinations of Kurt Schumacher’s SPD. The latter, in continuation of Hilferding’s conceptions of an organized capitalism, aimed to overcome the anarchy of markets by means of a political accommodation process between trade unions, employer organizations and the state. Eucken and Erhard considered such ideas as an indirect route to the servitude of a planned economy. As an alternative for Germany they proposed a strong state independent from organized interests that could maintain the conditions for free competition. This appealed particularly to middle-sized industrialists and firms (referred to as the Mittelstand), who viewed their profits as being under threat by the market power of large firms, the wage demands of organized labour and by the tax claims of the state.

In the coming weeks the AfG economists will attempt to copy this mobilization model. They see the euro as the outgrowth of a supra-nationally organized capitalism that appropriates the fruits of entrepreneurial activity and then distributes it to its welfare state and financial capital clienteles. The demand for the restoration of national sovereignty is directed against the exploitation of entrepreneurship by interest groups organized at the European level. Apart from the categorical rejection of the euro this intellectual worldview does not otherwise differ from the neoliberalism of the other political parties, except Die Linke. The dream of a world of property-owning citizens armed with Deutschmarks, who view themselves as free and equal, gives comfort to owners of mid-sized enterprises and their political representatives in the face of the competitive pressure they are exposed to vis-à-vis the concentration and centralization of capital. Such dreams may even succeed in compelling them to vote for the AfG.

And indeed, due to the absence of more credible alternatives, such Deutschmark dreams also exist among poorer social layers, along with the rejection of the euro as a subsidy mechanism for lazy southern Europeans. Whether electoral success can result from this is doubtful. Germans not belonging to the class of property-owning citizens all too often hear experts harping about the necessity of austerity to be able to expect anything different from the free-market preaching economics professors of the AfG; not unlike what the non-property owners of southern Europe hear from the Troika and its economic advisors.

“The cement of European integration and globalization is cracking and can no longer hold together the neoliberal project. The search for alternatives is well underway.”

Those who fear social declassing, or who indeed have already suffered it, will feel more likely to have their concerns addressed by figures like Stronach than by Bernd Lucke. As social climbers they are ideal figures for the projection of hopes for an individualized escape from social misery. Lucke represents nothing other than a know-it-all linked to elites to whom subordinates are daily exposed. Stronach, Le Pen and Wilders attract voters because they translate diffuse discontent with the rule of big money and faceless bureaucracies into a concrete attribution of blame and offer ways out of (even if only alleged) undeserved misery. For the AfG to achieve electoral success they have to come up with a leadership figure exhibiting the trademarks of a social climber, or an open racist. If they don’t succeed in this, or they flinch from a Bonapartist option, their impact will remain limited to contributing to the decomposition of the ruling bloc.

The cement of European integration and globalization is cracking and can no longer hold together the neoliberal project. The search for alternatives is well underway. Sooner or later, even in Germany, something more attractive on the right than the AfG will emerge unless a left-wing party and movement arrive before it. But for this to happen it must take social insecurity seriously, even if at times it is formulated in highly politically incorrect ways. At the same time it must guard against the lure of left-wing policies in right-wing populist garb, as well as the temptation to stake a position on the left flank of the disintegrating elite consensus. Socialist and internationalist alternatives are needed to neoliberalism and right-wing populism and extremism. Something so simple, yet so hard to do. •

Translated from the German by Sam Putinja.