German voters are heading to the ballot box on September 22. The re-election of incumbent chancellor Angela Merkel seems certain. The latest polls saw her Christian Democratic Union (CDU) party at 42 per cent, a 16 per cent lead over the social democrats. What is less certain, however, is with which party the conservatives will form a coalition government. Their current partner, the liberal Free Democratic Party (FDP), scored 14.6 per cent in the last elections but is at risk to fail the 5 per cent threshold that parties have to pass to send deputies to the German Bundestag.

A majority for the incumbent coalition between conservatives and liberals is further aggravated by the formation of the anti-Euro party, Alternative for Germany (AfD). According to polls this new party doesn’t stand a chance to gain seats but may take just the number of votes that the current government would need for re-election. Also unknown are the fortunes of the libertarian Pirates party whose main focus is free internet-access. At this point, the party only scores 2 per cent of the vote but the lingering NSA-surveillance scandals might win them a few more votes on election day.

If the liberals don’t make it into the Bundestag again, or the combined liberal-conservative vote falls short of a majority, the conservatives will most likely form a coalition with the social democrats (SPD) like they did from 2005-09 in a ‘Grand Coalition.’ Social democratic frontrunner Peer Steinbrück, who served as finance minister under Merkel in the past, said he wouldn’t do this again but it is widely assumed that he will either change his mind or make room for somebody else to form a new government. There are also speculations about a coalition between the conservatives and the Greens (Die Grünen), but chances for that actually to happen are pretty low. A coalition between social democrats, the Greens, and the Left Party (Die Linke) may become possible arithmetically but all three parties said they’d not be interested.

Until now, the election campaign has been more than lame. Neither complicity of the Merkel-government in NSA-spy-activities, which reminds many Germans, notably in the former German Democratic Republic, of much hated STASI-activities, nor a major military-procurement scandal over the Euro-Hawk, a drone project, got the campaign off the ground. Commentators and pollsters agree that the number one topic that will determine election results is the one that nearly all candidates try to avoid – the unresolved euro crisis. A majority of Germans feel they did much better during the crisis than southern Europeans but many think that they are already paying for the debt in these latter countries or will have to do so in the future.

The following article, originally published in the German monthly Sozialistische Zeitung, looks at political debates about the euro-crisis and their possible impact on the upcoming elections.

Austerity continues its grim work across Europe. But have neoliberal austerity and redistribution policies contributed to the outbreak of the global economic and euro crises as critics of capitalism claim? Are the Keynesian economists correct when they point out that without government spending programmes the crisis would have spiralled straight into a depression? And are IMF president Christine Lagarde and chief economist Olivier Blanchard right when they warn that the persisting danger of a depression can only be averted if the foot is taken off the debt brake? 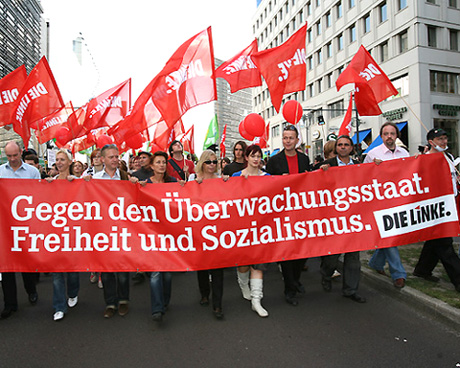 But we need not listen only to these killjoys. Bundesbank president Jens Weidmann knows better. Acting as if he’s still advisor to chancellor Angela Merkel he sets the neoliberal agenda, which Merkel and Wolfgang Schäuble then translate into country specific austerity programmes to be passed along to the European Commission for implementation. In this way the German government has succeeded until now of displacing the consequences of the crisis – rising unemployment, pauperization, looming state bankruptcy – on to other countries and then presenting Germany as a European economic wonderland. Below the surface, however, many people even in Germany are preoccupied with the fear of Greek conditions one day hitting them.

Such fears are being taken up by the new anti-euro political party Alternative For Germany (AfG), and by some politicians from the older parties such as Christian Democratic Union (CDU) parliamentary vice-chair Wolfgang Bosbach and the Free Democratic Party (FDP) member Frank Schäffler, who transform these fears into a political programme for German self-assertion. According to these politicians it is not neoliberalism that is the problem, but rather its dilution by the institutional undergrowth of the EU and the ECB. They view the common currency as the forerunner to a European system of collective debt liability, which will suck the hard-earned savings of Germans into the vortex of southern European inefficiency. As an alternative to the supranational institutions of the EU they have in mind unfettered competition between countries and national currencies. In their view a Germany liberated from the ballast of the euro would be fit for competition in the world market.

The Leftist Critique of the Euro

The euro is criticized on the Left with an entirely different focus in mind. Here it’s not about the conquering of the global (currency) market by the Deutschemark, but about alleviating the competitive pressure on the crisis afflicted southern European countries through the reintroduction of national currencies and their devaluation vis-à-vis the creditor nations. Only in this way can further social devastation in the South be avoided, and perhaps, even a way out of economic and social misery can be found. This economic reasoning, which recently found a prominent advocate in the person of Oskar Lafontaine, is complemented by the political critique of the euro by former Gerhard Schröder advisor Wolfgang Streeck. Streeck produced the blueprints for the so-called Riester-Pension schemes and the Hartz reforms with the intention of making the German welfare state competitive with low-wage competition from China and other countries of the South.

In the meantime he has come to the conclusion that the main problem for the welfare states and democracies of the North is not the cheap labour power of the South, but the power of the global financial markets. He sees this power as being institutionalized in the EU and he makes the case for the self-assertion of national democracies vis-à-vis the dictatorship of the ECB and the fiscal pact. Adjustments in exchange rates would allow for the lessening of international competitive pressures so that social compromises could then be negotiated in individual countries.

How well do these critiques hold up?

In their own ways, the criticisms of the euro from the Left and the Right are quite well founded. Were Weidmann to offer not only fiscal policies suggestions, but were he to preside as Bundesbank president over a reintroduced Deutschemark, he would have long ago been dragged into a currency war due to interest rate hikes. Only Mario Draghi‘s ECB governing council keeps him from this. That the reintroduced Deutschemark would emerge as a hardened investment currency from the speculative storm of such a war is nevertheless doubtful. Even without rising interest rates the Eurozone finds itself in a mild recession. An interest rate shock in its former core country would trigger an unparalleled economic collapse. Investors would ask themselves where high interest yields are supposed to come from in a wrecked economy, and would invest their money elsewhere. Whether a reintroduction of the Deutschemark or the Drachma would lead to an appreciation of the former and a devaluation of the latter is by no means certain. Erratic exchange rate fluctuations and the resulting uncertainty among investors, which is one of the better arguments made by unswerving euro proponents, are also conceivable.

This possibility also applies for the devaluation strategies of the Left. Weidmann, Merkel and Schäuble, along with their entourages in other countries, who presently oppose abandoning austerity policies, will scarcely be inclined to negotiate a currency system that abandons Germany’s competitive advantages in order to lessen the competitive pressure on the weaker Eurozone countries. But if the governments of the concerned countries are not able to agree upon such a system, escalating exchange rate fluctuations, general economic collapse, and political conflicts will be the result. Even if such destructive developments can be avoided and instead the sought after devaluation of the Drachma, Peseta and other currencies takes place, this would still be a double-edge sword. In view of economic specialization within Europe many consumer goods would still have to be imported for the foreseeable future and they would become more expensive in countries that devalued their currencies. Imported inflation would result in similar reductions in real wages, as is the case with the EU mandated austerity programmes. Furthermore, devaluations will not solve the problem of indebtedness. Whoever doesn’t want to speak about debt forgiveness should not begin to speak about devaluation.

As long as they do not belong to the neoliberal grit-your-teeth-and-bear-it brigade of Angela Merkel, Peer Steinbrück (SPD) and Jürgin Trittin (Greens), euro proponents must nevertheless ask themselves what alternatives they have to offer. That the neoliberal construction of the euro did not trigger the crisis, yet at a minimum greatly exacerbated it, is undisputed on the Left. That alternatives to neoliberalism cannot be implemented within the EU and the ECB is also a reasonable conclusion. Nonetheless the question “how do you stay with the euro?” does not constitute the main contradiction for left-wing politics in Europe.

Neoliberalism began its triumphal march long before the currency union and will not automatically disappear with its disbandment or break up. For this to happen convincing alternatives and assertive social movements are necessary. As things now stand class struggles in Europe are fragmented along state boundaries due to the common currency’s existence within the framework of nationally based fiscal, labour market and welfare policies. When struggles advance in one or more countries, but not in the others, the question of a euro exit can certainly be posed. But it is crucial that a social movement against neoliberal capitalism also exist. And one more thing: Pressure on weaker countries can also be exerted through the currency union in another way. The construction of a powerful and solidaristic social movement in the Teutonic heart of the European beast would help Greeks much more than the reintroduction of the Drachma. •

Translated from the German by Sam Putinja.