Student Debt and the American Dream

This interview is part of a larger piece on the student debt crisis in America the author wrote as an assignment for one of his classes at the Graduate School of Journalism at Columbia University. The piece offers a longform, narrative, character-driven tale of three indebted students and how being in debt jeopardizes their personal development, their career prospects and their ability to pursue their dreams and even be free. Following them throughout the process of getting loans, accumulating debt and meeting (or not meeting) payments, the article gives the whole story and history of student debt: its political and financial ramifications, the consequences it has on students and society as a whole and the different approaches to tackling the crisis. The story remains unpublished. If you are an editor interested in running it, please contact aguzmanbas@gmail.com to see the entire piece.

Álvaro Guzmán Bastida is a New York based journalist from Spain, and a recent graduate of the Columbia Journalism School. He writes about social justice, financial wrongdoing and alternative economies. His work has been published by FronteraD and Nuestro Tiempo magazines, in Spain, the Associated Press, CNBC.com, Narrative.ly, and the newspapers The Sunday Times, in London, and Clarín, in Buenos Aires among others.

Álvaro interviewed Sam Gindin, who is the former Chief Economist of the Canadian Auto Workers union, and is the co-author of The Making of Global Capitalism: The Political Economy of American Empire (Verso, 2012).

Álvaro Guzmán Bastida (AGB): In your book, In and Out of Crisis, you and the other authors refer to the expansion of access to credit as being “as or more important to the dynamism and longevity of the finance-led neoliberal era” than any of the other aspects of the turn to neoliberalism. You mention how it allowed the working-class to maintain its living standards in the face of stagnating wages, allowing the system to preserve its legitimacy and stability. Where do indebted students fall into all of this? 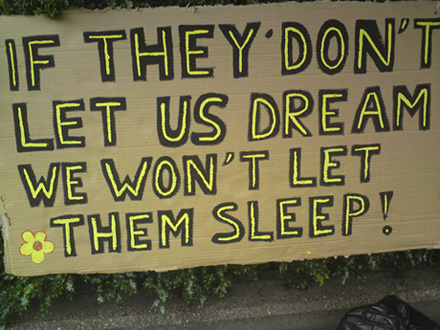 Sam Gindin (SG): Students, like workers, are confronting the frayed remnants of the ‘American Dream.’ The very same trends that led workers into debt and positioned finance to facilitate that process also drove the increase in student debt. The falling incomes of working-class families made it more difficult for them to pay the education costs of their sons and daughters. The higher tuition fees alongside fewer and lower student grants – all part of the more general erosion of public services – further squeezed student’s budgets. The especially low pay for part-time jobs obviously limited student earnings from significantly easing their financial burden. So the only way for students to hang on the increasingly tenuous promise of the good life, as measured by individual consumption and hopes for upward mobility, was to follow the more general trend of workers into indebtedness.

There are however important differences between workers and students. Many students come from relatively well-to-do families and that may help them escape or at least limit the burden of debt. And a good many students from the working-class see a degree as a ticket to escaping that class. Yet if we turn from the costs of an education to what happens to students after graduation the student-worker overlap tends to get closer. Only a few students will become tenured professors. The majority will end up as untenured, low-paid lecturers or with jobs outside academe that include the same pressures that other workers face. Since a university degree is for many essentially only a precondition for getting into a competitive labour market, ‘proletarianization’ is the likely future for many students – for them as with workers, the American Dream is turning into an American Nightmare.

AGB: Isn’t the situation described above one of a false illusion of freedom?

SG: Going into debt does add to the current ‘freedom’ to consume, but it obviously brings pressures to both work harder and limit future consumption to pay off the debt. But that is not the main issue. The point is that identifying consumption with freedom represents a very limited notion of freedom and democracy. It’s not just that consumption is only one aspect of a full and richer life, but that without some greater collective capacity to shape our lives – which means thinking of ourselves as more than consumers – even this freedom to consume becomes threatened.

Let me put this more broadly. Capitalism comes with a particular trade-off: in exchange for the collective and active power to do (control what is produced and how it’s produced) you get the individual and relatively passive power to consume. Because this production-consumption trade-off is unequal, the capitalists who control the productive side can use their asymmetric power to move production elsewhere, threaten jobs, and therefore limit access to consumption – that is, demand an ever greater share of consumption for themselves and less for others. The underlying illusion is that an unequal economy can be the basis for a democratic society.

AGB: Can a 22 year-old who is $120,000 in debt be truly free? Can he or she be politically active, or cultivate values such as solidarity while starting his or her adult life in a situation like that?

SG: Since the crisis, consumer debt has generally decreased in the economy but increased exponentially in the case of students. While working-class families cut back on consumption and borrowing to adjust their finances, students had no choice – their position could only improve if they got an education on the road to a job. Between 2004 and 2012, the number of U.S. students in debt actually increased by 70 per cent. And since the average debt also increased by about 70 per cent, student debt nearly tripled, reaching $1-trillion. So it wasn’t just a matter of the pressures on the minority of students with debts of $120,000; the impact was very much wider.

This impact, as you suggest, goes far beyond the interest paid. Debt dependence serves a disciplining and individualizing function. It reinforces the pressures on making ordinary decisions into financial decisions: students to take courses that are more pragmatic and jobs that are more likely to pay more even if not as interesting; going on strike is more difficult because of the greater implications of debt on an interruption of income. And it identifies the solution in individual terms rather than collective terms. To keep up, students tend to look to accessing even more debt or to getting their payments more spread out – rather than why higher education isn’t a universal right. Yet – and this is crucial – in spite of such pressures the outcome, as the Quebec students recently showed, is not closed; it is still possible to build a counter-response.

AGB: Before getting to that, can you elaborate a bit more on the consequences for a society living under the influence of the debt narcotization?

SG: Debt-dependence contributes to the creation of a fragmented society overwhelmed by individual survival and further identifying those individual problems in relatively narrow ways. It tends to de-politicize people or channel their politics into taking inequality, permanent insecurity, and aggressive competitiveness as given bounds on what is possible, rather than constraints to collectively challenge and change.

The U.S. comedian George Carlin, after a remarkable rant on this theme of political ‘narcotization,’ ended with: “It’s called the American Dream, because you have to be asleep to believe it.” Occupy picked up on this with one famous picket referencing that Carlin quote and adding: “Wake up America!”

AGB: There are people making millions off of the student debt crisis. The U.S. government hires servicers who, funded by taxpayer money, persecute and harass debtors until they pay off their debts. It even guarantees the payment of those debts, in a sort of ongoing bailout. What does this say about the position of the government in relation to corporations/the financial sector and its own citizens? Which one is it closer to and why?

SG: The question answers itself. Your readers know whose interests governments have represented but the question is what can we do about it? And in this regard, an overly mechanical view of the role of governments and states (i.e. the complex of institutions that reproduce the general conditions for a capitalist society, including the civil service, military, police, judiciary along with the government of the day) can itself become a barrier to addressing the problem.

Simply changing governments won’t solve things but neither will writing the state off as a site of struggle. Mobilized pressure from below can in fact win gains from the state even if they are limited. The issue is that to go beyond those limits, we need to go beyond looking to better state policies and address how to shift the balance of power in society and that means taking on corporate and especially bank power. And as this too comes up against limits, we will need to address the question of moving beyond capitalism and its debilitating logic and structures. But that returns us to the question of how to transform capitalist states to states that are becoming democratic in the deepest sense of supporting popular capacities to control the economy and all aspects of our lives.

AGB: What does the student debt crisis say about the U.S. as a country and the way it perceives education? What alternative model do you propose?

SG: The student debt crisis and the broader developments in the U.S. and elsewhere confirm views long held on the left. Education is not a universal right in the United States. The goal of education is not to develop critical citizens who can analyze, evaluate, and contribute to improving and changing the world. Capital accumulation trumps everything. And so on. The alternative directly follows. Education is critical to economic and political participation and this means it must become a universal right rather than a commodity dependent on ability to pay. This is partly realized in free public education up to high school. It needs to be extended to free university education. And since the question is not just access to education but the content of education, this poses a struggle against the subordination of education to the status quo and capitalist priorities. In fact, truly addressing equality of opportunity to education and content imply not only addressing broader inequalities in society but ultimately taking on capitalism itself.

For students, the question is whether, as part of their concern to pay less for their education and to reduce their debt, they will also commit to a larger project. Will they use their particular access to knowledge to the ends of democratizing knowledge beyond the university, organize themselves and build alliances for this more ambitious struggle, and – as they become either academics or workers – act as organic intellectuals linked to the working-class? •