After days of hesitation and negotiation, the government has finally decided to evacuate the Taksim Commune, where thousands camped in Gezi Park and which tens of thousands visited every night. Police attacked Gezi Park yesterday evening (June 15) and after evacuating it using tear gas and, as a novelty, water cannon apparently supplemented with a special kind of chemical since it burnt the skin of everyone it touched, razed the tents, the infirmary, the kitchens and the library established there to the ground. 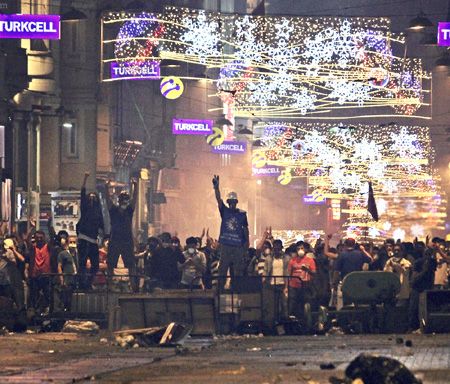 One focus of resistance crushed meant a thousand flourished. Immediately, in a series of neighbourhoods of Istanbul and in many cities around the country, people came out in their thousands and sometimes in their tens of thousands spontaneously and started to chant the common slogans of the already fifteen-day old rebellion. The most relevant to the occasion was, of course, the widely chanted “Everywhere’s Taksim, everywhere resistance!” Other significant ones were “Shoulder to shoulder against fascism!” (Turkish left-wing tradition calls all kinds of repressive regimes “fascist”) and “Government resign!” Moving from working-class neighbourhoods, tens of thousands occupied circular roads in opposite edges of Istanbul on the Asian and European sides. A group close to one thousand marchers crossed the main bridge over the Bosphorus that connects Asia and Europe. Istanbul has now become an arc of struggle and resistance that extends over 80 kilometres in a city of an estimated population that is 14 million-strong. In the centre of the city, even very posh quarters were the scene of cacerolazos (pots and pans concerts) and marches.

The strategy of the police was simply to protect Taksim and the environs. They made this a question of honour and saved face by not admitting the protesters near this square, which has been hotly contested over the last fortnight. That is why they poured tonnes of pepper gas on those crowds that, like the one we were part of, were several kilometres near the square and were forcing the police barricade, while they were not able to even touch those huge groups that cut the circulation of traffic on major arteries and throughways and marched until sunrise. But even near Taksim there were at times huge crowds. For instance, the one we were part of reached up to the tens of thousands at a certain point. But the choking effect of incessantly thrown tear gas and the bite from the chemically enhanced water played their part and over the hours many people left.

There was, though, at a certain moment an event of utmost significance. Gezi Park has been at the centre of the attention of the whole world throughout these two weeks, with its enjoyment of an atmosphere of freedom and shared life. Rightly so, since this experience implied that tens of thousands of youth were introduced for the first time to the beauties of sharing a common life. But in the process, the world, and many in Turkey as well, ignored that the ignoble line of the Turkish police in handling mass demonstrations was being continued elsewhere. An outstanding example was the Gazi neighbourhood of Istanbul, a working-class district with an Alevi majority (the Alevis are a religious minority that number in the tens of millions, though the exact figure is a mystery). The irony was even embedded in the names of the two places, Gezi and Gazi. The almost ticklish event occurred at the moment when last night our thinning crowd received the support of a crowd of people arriving from Gazi, chanting “Hold tight Taksim, Gazi is coming!” Gazi finally met Gezi in the same vortex of violence!

Elsewhere in Turkey the masses poured out onto the streets as soon as they found out about what had happened at Gezi Park. In Ankara, the capital city, Izmir, the third biggest city on the Aegean coast facing Greece, Adana and Bursa, respectively the centres of the textile and metal industries, and Antalya, the major summer resort centre on the Mediterranean, all saw huge crowds gather on their major squares. Nonetheless, the attitude of law enforcement was very diverse, ranging from total abstention from violence in Izmir and Antalya for example to extreme use of force in Adana.

There is no doubt that people in high places are meeting frantically in offices in Ankara. The government, the heads of the intelligence and law enforcement bodies and top brass are in all probability weighing the merits of martial law or a state of emergency. Parallel to these official consultations, there is little doubt that the fissures in the ruling class are finding their way into the apex of power. An anti-Erdogan coalition has emerged in the alliance between Abdullah Gul, the president of the republic with roots in the AKP, Bulent Arinc, the deputy prime minister, another heavyweight of the same party, and Kemal Kilicdaroglu, the leader of the self-appointed social democracy of Turkey, which is also the major Kemalist, i.e. secular-nationalist party. This party, a darling of many sectors of the left, is trying to let the steam out of the movement although it claims hypocritically to be siding with it.

Prime Minister Tayyip Erdogan has probably made the biggest mistake of his life. His hubris again pushed him toward making a rash decision. The leadership of the organizations that were handpicked by the government as representatives of the revolt were ready to liquidate the movement. But they had to proceed cautiously lest the rank and file rebelled against their capitulation openly. They only needed one day to size down the whole Taksim Commune and at most a week to dissolve it. But Erdogan had scheduled a rally in Istanbul for Sunday the 16 June, where he wanted to put on a show as a victor. That is probably the major factor behind the timing of the police raid on Gezi Park.

The attitude of sections of the left regarding the continuation or the dissolution of the Gezi Park Commune is instructive. Only a week ago the hand-picked representatives of the movement had put forth a list of demands, many of them incredibly minimal formulations of otherwise legitimate grievances. One example should suffice. Faced with the brutality of the methods of the police forces, including the use of troops without uniforms wielding nailed wooden bats, pretty much in the same vein as the Shabiha of Bashar Assad (in Syria) or the Baltadjis of Hosni Mubarak (In Egypt), the representatives only demanded the removal of some provincial governors, as if it were not the home minister that was responsible for these brutal and shameful policies.

Yet despite the shortcomings of those original seven demands, these proved to be extremely precious when compared with what the representatives agreed to in the end. Erdogan simply proposed a referendum on the future of Gezi Park and an internal investigation of excesses by the police. Given the track record of the Turkish police and armed forces in investigating their own crimes (fully one and a half years after the Uludere/Roboski massacre, where 34 Kurdish peasants were bombarded to death by the Turkish air force, not one single person has been prosecuted), the promise of an internal investigation is a joke! And yet the representatives accepted it and decided to unpack. This was truly incredible, given the fact that not one of their original demands had been granted and the additional fact that the movement had not lost any of its vibrancy.

However, in forum after forum held at Gezi Park, the independent youth that formed the backbone of the Taksim Commune characterized the concessions of the government as ludicrous and refused to budge. This led the leadership to opt for a devious method of liquidating the movement. Caught as they were between the devil and the deep blue sea, the leadership manoeuvred and declared they were holding fast, whereas they were simply trying to lay the commune on its deathbed. Even this much of rhetoric proved too rebellious for Erdogan’s taste. War ensued.

The revolt is unprecedented by the breadth of its influence, the depth of the rage out of which it was born, and the self-confidence and courage of the ordinary masses of people, many with scant political experience in the past. If last night’s affluence and combativity continue, not only Erdogan’s but also the whole regime’s future would be put in jeopardy.

A factor of immense importance is the fact that DISK, the most progressive industrial workers’ confederation, and KESK, the most leftward leaning among the public employee confederations, have jointly declared a general strike and appealed to their rank and file to go out on the street and protest. This is a novelty and of critical importance, but we will have to wait and see to what extent this promise will be kept once we get to Monday, which is when any kind of strike would be meaningful.

All in all, the Turkish revolt is entering a new stage in which the struggle may, under certain conditions, bear much more distinctively the stamp of class struggle. It may erupt into a revolution any moment. It may, however, also dwindle into a simple protest movement and gradually die out some time in the coming period.

Even if that is the case, subsequent repercussions on Turkish politics, on the working-class movement and on the left promise to be considerable. •