The outcome of the May 14 election in British Columbia was a setback to progressive forces in the province and across Canada. The incumbent Liberal Party won a fourth straight term with 21.8 per cent support from eligible voters (44.4 per cent of those who voted). Its principal election plank was “full steam ahead” on a three-pronged expansion of fossil fuel extraction and export–from the Alberta tar sands, the natural gas fields in the northeast of the province, and coal fields in British Columbia and the United States.

There was a dearth of substantive policy debate and alternatives offered during British Columbia’s election campaign. Transit, education, health care, social welfare, housing – these and other burning issues received too little attention.

A partial exception was the attention devoted to fossil fuel extraction, transport and export from the province. This focused almost exclusively on the two proposals to build or expand tar sands pipelines from Alberta to export terminals at Kitimat on the north coast and Vancouver in the south. The two leading parties staked out more or less opposing positions – the incumbent Liberals in favour and the New Democratic Party opposed (a caveat in the NDP position was its silence on the portion of Kinder Morgan’s Trans Mountain pipeline expansion that would see tar sands product delivered to U.S. refineries just south of the border at Vancouver.)

With the Liberals’ surprise election victory, the gloves will come off in Kinder Morgan’s corner to win its expanded line. Meanwhile, call this naive, but prospects for the Northern Gateway pipeline in the north still look dubious – the wall of popular opposition, including from Aboriginal peoples, is unmoved.

Meanwhile, two other fossil fuel projects that are championed by the new government will begin to receive the heightened attention, and opposition, they deserve. One is the five-and-counting proposals for liquefied natural gas (LNG) plants on the north coast, to be fed by expanded fracking production in the northeast and construction of several feeder pipelines. The other is expanded coal production and shipment by rail, including from the U.S., through the ports of Vancouver and Prince Rupert (near Kitimat).

It all adds up to major political and social confrontations on the agenda. As Union of BC Indian Chiefs Grand Chief Stewart Phillip put it in an interview assessing the election, “We are, in all likelihood, moving toward an era of confrontation and conflict.”

The scale of the plans of the natural gas companies is staggering. The latest and largest LNG proposal was announced last week for Prince Rupert by the British-owned BG Gas. It aims to eventually produce 21 million tonnes of liquefied natural gas per year. Initial production would begin by 2021.1

The energy required to power BG’s fully-operational Prince Rupert complex would be equal to that contained in the current production of natural gas in the province. Or by another measure, it would nearly equal the electrical production of the Site C dam, a hotly-contested hydro-electric proposal by BC Hydro, the public utility, along the Peace River. That would produce 900 megawatts.

The four other LNG proposals that preceded BG’s whopper were already going to require the equivalent of half of present-day electrical production.2

The LNG plants will obliterate the already-sham greenhouse gas emission reduction targets that a Liberal government put into law (sic) in 2007 – 33 per cent reduction by 2020 from 2007 levels. The five LNG plants proposed would produce four times the current greenhouse gas emissions in the province. Not to speak of the fact that emissions estimates for natural gas are notoriously unreliable because they do not fully account for leakage all along the production and shipment chain.

Another major natural gas concern is the vast consumption of fresh water required, particularly where hydraulic fracturing (fracking) is used to break up underground rock or shale to release the entrapped gas. Related to this is the chemical pollution of the water used in fracking. Chemicals are mixed into the fracking solution. It is then dumped at the surface or left underground.

In North America, the chemicals and their quantity are considered commercial, proprietary information which the public does not have the right to examine. A rare glimpse into this secretive world was provided in an article in the May 4 Vancouver Sun. It reports that the dozens of chemicals used in fracking include hydrochloric acid, ethylene glycol (antifreeze), xylene, light aromatic naphtha, polyethylene glycol and kerosene.

The gas industry in Canada and the U.S. says there is ‘no problem’ with fracking. It says the chemicalized fracking solution is forced much deeper underground than fresh water tables. But Ben Parfitt, a resource policy analyst with the Canadian Centre for Policy Alternatives, told the Sun there is evidence in Colorado and Wyoming of contamination of drinking water from fracking in very deep zones.

The non-profit ProPublica newsroom has reported water contamination in almost 1,000 rural water wells in U.S. regions where drilling is taking place. The Building Resistance Tour currently in northern BC reports very serious concerns and examples of fresh water pollution already taking place in the region, that is, prior to the big expansion of fracked gas extraction that is projected.

Where the Parties Stand

The Liberals and the NDP each support the gas plans. The Liberals made it the centrepoint of their election platform, saying the projects will guarantee prosperity in the province for decades to come.

The NDP’s environment critic, Rob Fleming, thinks the province can give a green light to LNG and still maintain its (absurdly timid) greenhouse gas emission reduction targets. He thinks that “alternative energy” sources, namely wind power, and “excess” hydroelectricity can be used to power LNG plants.

That leaves electoral opposition in the hands of the Green Party. A widely-reported press conference by the party on May 9 reiterated the party’s call for a moratorium on the fracking of natural gas. Left unsaid was whether the moratorium would apply to the Apache/Chevron/Encana project in Kitimat. It received an export approval from the National Energy Board in 2011. Construction of the LNG plant and 463 kilometre feeder pipeline is underway.

The Green Party’s Statement of Intent says, “The Green Party of British Columbia is dedicated to getting the province off oil, gas and coal.” However, the emphasis in its discourse on natural gas projects is not at all environmental. It is economic. It says that the rush of international investors into natural gas production around the world has depressed prices and will continue to do so. Hence, it believes that the “economics” of LNG will not work.

The economic argument certainly has merit. But the main opposition to gas fracking should be its environmental and social consequences, not whether it can reward investors and pay royalties to public coffers.

During the election campaign, Green Party leader Jane Sterk voiced several other misguided qualifiers about natural gas. One is that natural gas can serve as a “transition” fuel to a greener future; a second is that if LNG goes ahead, the plants should be powered using “renewable energy.”

Green Party candidate Chris Aikman on Vancouver Island said it makes sense “to use our glut of natural gas to displace coal-fired generation.” But British Columbia has no coal-fired electrical production of significance and, in any event, the argument for natural gas as a cleaner fuel than coal is bogus. 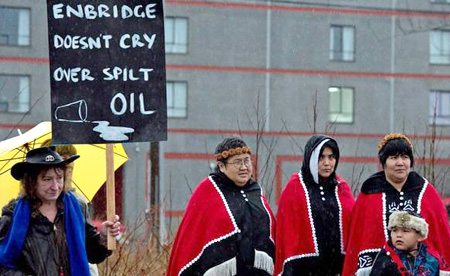 The federal Green Party appears to have little to say on the rush of LNG developments, even though its sole, sitting member represents a district in the province.

Aboriginal peoples in the north are caught in a dilemma. The gas companies are offering desperately needed funds to communities in affected areas as well as much needed employment, including training. Communities in the gas fields are fiercely opposed to the despoliation they suffer, whereas those along the pipelines routes or where the LNG plants will be constructed are divided, some in favour, some opposed.

Parallel to the oil and natural gas industries’ assault on British Columbia’s land, air and water are big expansion plans for coal mining and export. These would make Vancouver the largest coal exporting port in North America and significantly expand exports from Prince Rupert on the north coast.

Coal companies in the province aim to increase metallurgical production for export to Asia in three regions – in the southeast and northeast, and on the east coast of Vancouver Island. Opposition is stiff in the southeast, including from neighbouring U.S. states and even the U.S. Environmental Protection Agency. On Vancouver Island, residents south of Courtenay/Comox have waged a battle for several years to stop the Raven mine that would send as many as 75 giant truck shipments per day across the island’s highways to an export terminal to be constructed in Port Alberni.

Increased rail traffic and exports through Vancouver will also come from thermal coalfields in the U.S. west. Coal companies there have been hindered by citizen opposition from building export terminals on the coasts of Oregon and Washington state. So far, three of six planned terminals have been stopped in their tracks. As a result, reports the May 8 Oregonian, “Union leaders, coal companies and terminal developers say much of the coal is likely to be exported through Canada if Pacific Northwest [U.S.] terminals aren’t approved, generating train traffic but no jobs.”

The Liberals are gung-ho on coal exports, while the NDP has side-stepped the issue, if not outright supported coal expansion. Again, that leaves the Green Party and its sole, newly-elected representative as the only opposition in the provincial legislature.

Citizen Mobilization Will be Needed

The Green Party has it right when it says that British Columbia, and the world, must get off their addiction to fossil fuels. A moratorium on gas fracking is one starting point (provided it is real). But it will require significant citizen mobilization if the fossil fuel barons are to be stopped.

Notwithstanding the electoral setback, there is good cause to be optimistic in building such a movement. Changes in public awareness of greenhouse gas emissions and resultant climate change are well underway. These are already having impacts on government policy. Witness the extreme difficulty that tar sands pipeline projects are having in gaining approval. In January of this year, some 5,000 people rallied at the B.C. Legislature in Victoria to oppose climate-destroying policies.

Many jurisdictions in North America are moving to restrict gas fracking, including, most recently, in Quebec where the government proposes to ban fracking in the St. Lawrence River lowlands.

Some trade unions are exploring alternative energy and economic models. These include the unions in B.C. that signed an extraordinary open letter in February of this year cautioning against LNG development in the north of the province.

Replacing the current level of fossil fuel-generated energy consumption with alternative energies is no long-term solution to the climate threat. For that, we need to build alternative societies in which the profit motive (growth-for-growth’s sake) is replaced by a different imperative – that of social justice and respect for Mother Earth. Some countries are already embarked on such new paths of development.

These are the harbingers of societal change that give hope in the face of this withering assault by the world’s climate vandals. •

This is a slightly revised version of an article published four days ago on the eve of the May 14 provincial election in British Columbia.