European Trade Unions and the Struggle for Public Services

The public sector is a key battleground for a progressive trade union strategy and for an alternative to neoliberalism in Europe. On the one hand the existence of a public sector is a continuing example that a not for profit driven production of goods and services is not only possible in the 21st century – it is also preferable. On the other hand in many countries the public sector is the last stronghold of organized labour. Even though public sector workers are under continuous pressure, in many places they still enjoy significant job security and comparably decent employment and working conditions. The importance of the public sector can also be seen in the fierce attempts to sell off the remaining public assets in the crisis countries in Southern Europe. In other parts of Europe the public sector has suffered from excessive welfare cuts included in the austerity packages. However, the current attack on the public sector is only the latest chapter in a long struggle for public services. In this struggle European trade unions have adopted a variety of strategies to defend the public interest. 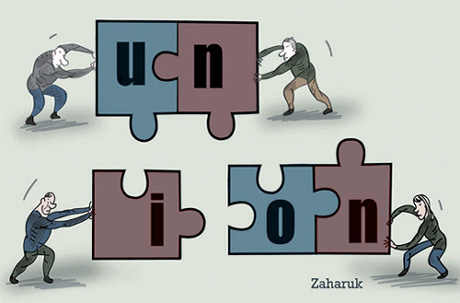 Initially many public sector unions called for strikes to prevent privatization. However, strikes rarely stopped politicians from proceeding with their plans. Supporters of privatization – including major right-wing newspapers – portrayed striking public sector
workers as selfish and backward looking, defending an outdated and deteriorating system. What supporters did not mention was that the poor state of many public services was not the result of workers’ ignorance or the lack of competition. It was the result of years of underfunding, following right-wing tax cuts and austerity policies. However, since the unions rarely raised the problem of service quality, pro-privatization arguments resonated well with the public, weakening the support for the striking workers. Strikes were also problematic for another reason – since the disruptions mostly hurt service users, they alienated the most important allies in the struggle for public services.

Following the defeat of strikes, unions frequently turned to concession bargaining. Initially they negotiated early retirement schemes and golden handshakes to avoid forced layoffs; later this was complemented by the acceptance of pay cuts and other losses for newly hired workers. The problem with concession bargaining is not only that once the process has started it is difficult to stop it – many union reps believed that the threat would be over after a first or second round of concessions, only to find out that management always came back and asked for more later. Since the ‘give backs’ were not distributed equally among staff members, concession bargaining also introduced splits in a previously relative homogenous workforce. The splits emerged between ‘older’ and ‘younger’ workers as well as between core and outsourced staff (the latter employed by subsidiaries or private partners). Fragmentations are particularly harmful because they undermine workplace solidarity and thereby weaken the capacity of trade unions to withstand further threats.

The abolition of public sector monopolies and the admission of two and more providers forced public sector unions to start organizing workers at competing work sites. For many public sector unions this posed a double challenge: since public companies often operated as quasi closed-shops with new employees automatically joining the union, union staff had little experience with organizing new members. At the same time workers at the competing service providers were different from the traditional workforce. They were young, female and in many cases had a migrant background (in several countries migrants were excluded from the public service if they were not in possession of the national citizenship). Existing union staff had problems to connect with them. There were some promising attempts to bridge the divide – including Ver.di‘s (United Services Union) campaign in Germany to organize the new competitors in the postal sector – but the cultural differences proved rather persistent with the effect that new competitors still have much lower unionization rates than the former monopolies.

In addition to striking and organizing, public sector unions also put considerable effort in lobbying. At first, they lobbied their national governments to delay privatization processes; later on lobbying focused on the European Commission and the European Parliament with the goal to ensure that social provisions were included in the European liberalization directives. Such provisions, for example, allow authorities to take employment conditions into account when they tender public service contracts. There were some successes as in the postal and transport directives, but in general the language remained vague and the adoption of effective measures was left to the member states. The European Federation of Public Service Unions (EPSU) also failed to reach the adoption of a public service directive, which would have excluded public services from the scope of the internal market.

Given the limited success of earlier strategies, trade unions started to experiment with new forms of resistance. First they realised that without public support they will not be able to stop privatizations. Then they found potential allies in a number of social movements and civil society groups that opposed privatization because of the negative effects for service users. The most prominent example is the mass protest against the Bolkestein Directive, which led to exclusion of healthcare from the legislation. Similar activities took place on the national and local level – including a series of referenda against the privatization of healthcare and water. The positive outcome of these campaigns makes it clearly a more successful strategy than the traditional forms of struggle. However, sometimes the success proved temporary. In several cases politicians came back with a new plan for privatization. The contingent nature of the outcome makes this strategy extremely resource intensive. Trade unions and their partners not only have to spend considerable time and money to build the initial campaign, they also have to keep the coalition together and sustain the interest of the supporters even after the campaign goal was met.

“The result was a series of ‘re-communalizations’ of water and waste services, after municipalities had found out that privatization rarely improved service quality.”

While in the past most of the campaigns were defensive in the sense that trade unions and allied groups fought off the threat of privatization, there are also an increasing number of pro-active campaigns – such as EPSU’s ‘turning the tide’ – demanding a renewal and strengthening of the public sector as an alternative to the private economy. At the local level such campaigns were aiming at taking back privatized services into the public realm. The result was a series of ‘re-communalizations’ of water and waste services, after municipalities had found out that privatization rarely improved service quality, but almost always was more expensive than public provision. ‘Re-communalizations’ are extremely important as examples of effective alternatives to privatization. However, except for the nationalization of failing banks (which had other reasons) de-privatizations have so far been limited to the local level. As such they hardly challenge the general thrust of privatization in Europe.

Another set of strategies (which so far have mainly been used outside Europe) combine traditional tactics with new objectives. Collective bargaining cannot only be used to improve working conditions. The improvement of service quality can also be made a bargaining task. American nurses, for example, negotiate staff-to-patient-ratios as part of their collective agreements. In a similar way, service disruptions (strikes) can be organized in a way that they affect decision-makers rather than service users – e.g. by dumping waste in front of a city hall instead of leaving it piling up in the streets. Another form of disruption, at least in the long-term, is the refusal to collect service fees or to cut non-paying customers off the service. The combination of traditional tactics and new objectives, as well as the strengthening of the link between service producers and service users make these strategies particularly promising. •

This article first published on the andreasbieler.blogspot.co.uk blog.