The Campaign Against the Rand Formula

It has been widely reported that Pierre Poilievre, the Federal Conservative MP for Nepean-Carleton, has launched a campaign to change the rules regarding the payment of union dues [See his November 2012 letter to his constituents]. The object of Mr. Poilievre’s ire is the “Rand Formula” – the union security clause found in most collective agreements and labour relations legislation in Canada. Under this formula, no employee in a unionized workplace is required to be a union member, but all have to pay union dues, with the employer deducting the money from the pay checks of all employees and transferring it to the union. 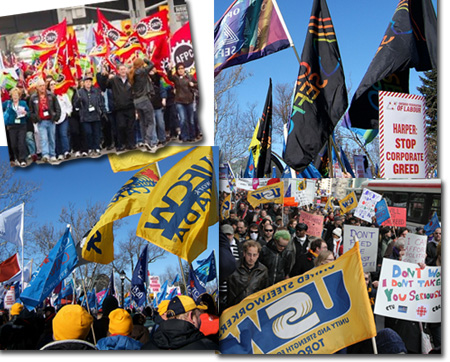 This dues paying formula was created by Supreme Court Justice Ivan Rand in 1946 when settling a strike between the Ford Motor Company and its workers. At its core is the principle that all those who benefit from the negotiated collective agreement should pay union dues and that there should be no free riders.

Mr. Poilievre’s concern to challenge the Rand Formula stemmed from his unhappiness with the Public Service Alliance of Canada (PSAC), the largest union in the Federal Public Sector, for engaging in political action. For a number of years at its triennial convention the PSAC has voted to earmark money for political action campaigns as well as social justice activities, and at each Federal, Provincial and Territorial election the PSAC uses some of these funds to issue report cards on political parties identifying which party policies best fit its members’ interests.

In particular, Mr. Poilievre was irked that the PSAC Québec political action committees had found that the Parti Québécois and Québec Solidaire were more in tune with the interests of PSAC members than the other political parties in Quebec.

But which political parties these committees favoured was a secondary matter for Mr. Poilievre. His main concern was that it was illegitimate for the PSAC, or indeed any union, to use union dues collected under the Rand Formula for political action; they should only be used to engage with workplace issues such as wages and working conditions. As he put it, “Workers have the right to unionize but they don’t have an obligation to unionize so the law should not force them against their will to pay dues for causes they don’t support. (Kathryn May, Ottawa Citizen 5 September 2012).

There are a number of problems with Mr. Poilievre’s position. Most obviously, it was not the ‘law’ that allocated union resources to political action but the decisions of the democratically elected members at the PSAC’s convention. But no less problematic is his assumption that the ability of unions to negotiate workplace issues such as wages and working conditions can be separated from political and economic factors outside of the workplace.

The close connection between workplace demands and the broader economic and political climate was recognized by the Supreme Court of Canada ruling on a case involving the Rand Formula in the 1990s [Lavigne v OPSEU] when Justice Laforest noted that one objective of the Rand Formula was to ensure that “unions have both the resources and the mandate necessary to enable them to play a role in shaping the political, economic and social context within which particular collective agreements and labour relations disputes will be negotiated and resolved.”

To take the most evident example of this, the possibility of a government imposing back to work legislation, or even threatening to do so, has a powerful effect on a union’s ability to negotiate workplace issues. But unions’ ability to negotiate these issues is affected by a wide range of political factors, including the level of support they have from other unions – and social movements – as well. It is also affected by broad economic factors such as the level of unemployment.

The decision of the PSAC, and many other unions, to fund political action committees reflects their growing understanding of the need to be involved in ‘shaping the political, economic and social context…’ if they are to defend their members’ interests effectively. A new law making this engagement more difficult is really an attempt to compromise the ability of unions to defend their members

Unions’ ability to defend their members’ wages and working conditions (and to organize new members) is increasingly undermined by a wide range of economic changes including the greater ability of companies to move across borders and the growth of temporary/part-time jobs. This ability is also undermined by the willingness of various governments to pass laws suspending the rights to bargain and to strike. These changes make it necessary for unions to increase their efforts to shape the “broader political, economic and social context.” Most unions understand this point. What is less well understood is how to go about this. Hopefully Mr. Poilievre’s actions will prompt some serious discussion of this question. •

Donald Swartz has taught at Carleton University for many years.

Rosemary Warskett has taught at Carleton University for many years.