It’s obvious why HD Mining is hiring workers in China to work at the Murray River Coal Project in Northern British Columbia. Because they are admitted to Canada on work visas under the Temporary Foreign Worker Program (TFWP), the company can pay them a lot less than it would have to pay Canadian citizens or permanent residents. 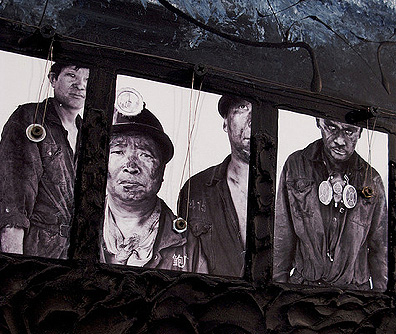 The owners of HD Mining are no doubt thankful that the Tory federal government has been expanding the TFWP, allowing employers in more sectors to bring in migrant workers. This move by Harper & Co. is part of their broader austerity agenda, which includes lowering wages and increasing insecurity among working people.

Officials from the International Union of Operating Engineers (IUOE) and the Construction and Specialized Workers’ Union (CSWU) have gone to court to try to cancel the company’s authorization to employ Temporary Foreign Workers (TFWs). Their rationale is clear. When interviewed on the CBC Radio One program As It Happens on November 21, Mark Olsen, the President of the Bargaining Council of BC Building Trade Unions, argued that Canadian workers should get preference for these mining jobs and that the Chinese workers already in BC should be sent home.

Officials of District Three of the United Steelworkers have put out a leaflet with the same message. Titled “BC Jobs for BC Workers,” it proclaims “Stop the sellout of our province.” The leaflet goes on to ask, “Is this type of future we want for our country? A future where low-paid foreign workers with no rights or protection fill jobs that drive down Canadian standards and allow larger profits for already profitable mining companies?”

This kind of response to the hiring of migrant workers appeals to many people in Canada. Unemployment and the fear of having to look for a job when decent work is getting harder to find are on the minds of many. But this response is dead wrong. It’s also an echo of the racist hostility to Chinese workers that was rampant among workers in BC a century ago.

Echoes of a Racist History

In 1891 the Vancouver Trades and Labour Council (made up of craft unions, the vast majority of whose members were white male skilled workers) called for a ban on Chinese immigration. This demand for exclusion was widely supported among white people in BC in the early 20th century. It fuelled the racist hatred that exploded in the 1907 riots in BC against South Asian and East Asian immigrants.

Then, as now, the Chinese workers in question were denied citizenship rights by the state and super-exploited by employers. Then, as now, the demand to exclude migrant workers rested on the assumption that some people (British subjects then, Canadian citizens or permanent residents now) are more entitled to jobs than others (Chinese migrants).

This stance pits workers who happen to have been born in different countries against each other. Yes, people in Canada need paid work to support themselves. But so do people in China. Is it any surprise that some Chinese workers are willing to leave their homes and travel thousands of kilometres to work in a remote area of BC for wages that are higher than they would make in China? Treating some people as less deserving of jobs than others simply because they don’t hold Canadian passports devalues their lives. It’s an invitation to immigrant-bashing and racism.

People who say they’re against employers bringing in TFWs because it drives down wages and benefits, worsens working conditions and boosts corporate profits are actually writing the recipe for that very result. The federal government isn’t going to curtail the TFWP – many bosses love it. Nationalist campaigns against the hiring of migrant workers will only reinforce divisions between citizens and non-citizens and fan the flames of racism. Employers will celebrate the fact that workers are fighting each other.

Instead of trying to exclude Chinese workers, BC unions should be thinking about how to build links of solidarity with them. That’s what socialists and other industrial union activists in BC did a century ago, challenging the racism of the craft unions.

But we don’t have to look back a hundred years to see what needs to be done. In 2006, SNC Lavalin and SELI Canada brought in Latin American workers under the TFWP to work on the Canada Line extension of Vancouver’s Skytrain light rail service and paid them less than TFWs from Europe. The CSWU organized the workers, took their case to the BC Human Rights Tribunal and won. There are plenty of Mandarin-speaking activists in BC who could be part of an innovative initiative to reach out to miners from China.

Growing numbers of employers are turning to the TFWP to get workers who are less expensive and easier to control precisely because they’re not citizens or permanent residents. Unions face the same choice they did a century ago: “Exclusion or Solidarity?” Trying to exclude migrant workers did nothing to help workers in Canada challenge employers and pro-employer governments in the early 20th century. It won’t do any better this time.

The alternative to calling for exclusion is to address the needs of all workers, regardless of citizenship status. A good starting point for an alternative approach rooted in solidarity is to demand “Status for all” (giving permanent resident status to migrants as soon as they arrive). This should be linked to a demand for the creation of well-paid, secure jobs doing work that reduces greenhouse gas emissions (not jobs in coal mines!). Such a demand could bring together union, migrant justice and environmental activists.

Let’s hope that some delegates on the floor at the BC Federation of Labour convention next week will challenge exclusion and argue for this kind of alternative. •