La Via Campesina: Food Sovereignty and the Global Feminist Struggle

Via Campesina is the world’s foremost international movement of small farmers. It promotes the right of all peoples to food sovereignty. Via Campesina was established in 1993 at the dawn of the anti-globalization movement, and gradually became one of the major organizations in the critique of neoliberal globalization. Its ascent is an expression of peasant resistance to the collapse of the rural world caused by neoliberal policies, and the intensification of those policies as embodied in the World Trade Organization (Antentas and Vivas, 2009a). 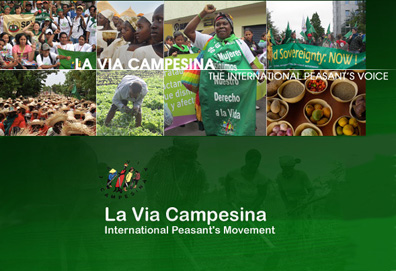 Since its founding, Via Campesina has promoted a “female peasant” identity that is politicized, linked to land, food production and the defense of food sovereignty – built in opposition to the current agribusiness model (Desmarais, 2007). Via Campesina embodies a new kind of “peasant internationalism” (Bello, 2009), that can be viewed as a “peasant component” of the new international resistance presented by the anti-globalization movement (Antentas and Vivas, 2009).

In 1996, coinciding with the World Food Summit at the FAO in Rome, Via Campesina highlighted food sovereignty as a political alternative to a profoundly unfair and predatory food system. This does not imply a romantic return to the past, but rather recovers knowledge and traditional practices and combines them with new technologies and new knowledge (Desmarais, 2007). As noted by McMichael (2006), there is a “mystification of the small” in a way that rethinks the global food system to encourage democratic forms of food production and distribution.

Over time, Via Campesina has incorporated a feminist perspective, working to achieve gender equality within their organizations, and building alliances with feminist groups, including the international World March of Women, among others.

At the heart of La Via Campesina, the struggle of women is situated at two levels: defending their rights as women within organizations and society in general, and the struggle as peasant women together with their colleagues against the neoliberal model of agriculture (EHNE and La Via Campesina 2009).

Feminist work in Via Campesina has taken important steps forward since its inception. In the First International Conference in Mons (Belgium) in 1993, all the elected coordinators were men. In the final declaration the situation of rural women hardly received any mention. Although it identified the need to integrate women’s needs in the work of Via Campesina, the conference failed to establish mechanisms to ensure participation of women in successive meetings. Thus, at the 2nd International Conference in Tlaxcala (Mexico) in 1996, the percentage of women attending was 20 per cent of the total: the same as at the 1st International Conference. To address this issue, a special women’s committee was created (later known as the Women’s Committee of La Via Campesina) and methods that permitted better representation and participation were enacted.

This move facilitated the incorporation of feminist analysis in Via Campesina. Thus, when Via Campesina publicly presented the concept of food sovereignty at the World Food Summit of FAO in Rome in 1996, women contributed their own demands. These included the need to produce food locally, and they added the dimension of “human health” to “sustainable agricultural practices,” demanding a drastic reduction in harmful chemical inputs and advocating the active promotion of organic agriculture. Women also insisted that food sovereignty could not be accomplished without greater female participation in the definition of rural policies (Desmarais, 2007).

The work of the Women’s Committee helped promote exchanges between women from different countries, including women-specific meetings to coincide with international summits. Between 1996 and 2000, the Committee’s work focused mainly on Latin America – through training, exchange and discussion – and rural women increased their participation in all levels and activities of La Via Campesina.

In October 2000, just before the 3rd International Conference of La Via Campesina in Bangalore (India), the 1st International Assembly of Women Farmers was organized. This allowed for greater participation of women in the organization. The Assembly adopted three major goals: 1) to ensure the participation of 50 per cent of women at all levels of decisions and activities of La Via Campesina, 2) to maintain and strengthen the Women’s Committee, and 3) to ensure that documents, training events and speeches of Via Campesina did not have sexist content or sexist language (Desmarais, 2007).

Members at the conference agreed to change the institutional structure to ensure gender equity. As Paul Nicholson of La Via Campesina notes:

“[In Bangalore] it was determined that equality of man and woman in spaces and positions of representation in our organization opened a whole internal process of reflection on the role of women in the struggle for women peasants’ rights. … The gender perspective is being addressed now in a serious way, not only in the context of parity in responsibilities, but also a profound debate about the roots and tentacles of patriarchy and violence against women in the rural world.” (Food Sovereignty, Biodiversity and Cultures 2010: 8.)

This strategy forced the member organizations of Via Campesina at national and regional levels to rethink their work in a gender perspective and to incorporate new measures to strengthen the role of women (Desmarais, 2007). Josie Riffaud of the Confédération Paysanne in France, states that: “the decision was critical of [lack of gender] parity in the Via Campesina, as allowed in my organization, the Confédération Paysanne. We also apply this measure.” (La Via Campesina, 2006: 15).

As part of the 4th International Conference in Sao Paulo, Brazil, in June 2004; the 2nd International Assembly of Women Farmers brought together more than a hundred women from 47 countries on all continents. The main lines of action that emerged from the meeting were to take action against physical and sexual violence against women; both domestically and internationally; demand equal rights and invest in education. As its final statement declares:

“We demand our right to a dignified life, respect for our sexual and reproductive rights; and the immediate implementation of measures to eradicate all forms of physical, sexual, verbal and psychological violence. … We urge states to implement measures to ensure our economic autonomy, access to land, health, education and equal social status.” (2nd International Assembly of Women Farmers, 2004.)

In October 2006, the World Congress of Women of La Via Campesina was highlighted in Santiago de Compostela, Spain. Participants included women from agricultural organizations in Asia, North America, Europe, Africa and Latin America; with the objective of analyzing and discussing the meaning of equality in the field from a feminist perspective, and a plan of action to achieve it. As one of the presentations – Sergia Galván’s Women’s Health Collective of the Dominican Republic – pointed out, the women of La Via Campesina had three challenges ahead: 1) to advance the theoretical discussion to incorporate the feminist peasant perspective in mainstream feminist analysis, 2) continue work on autonomy as a vital reference for the consolidation of the movement of rural women, and 3) to overcome the feeling of guilt in the struggle for higher positions of power over men (La Via Campesina, 2006).

At the 5th International Conference in Maputo, Mozambique, in October 2008, La Via Campesina hosted the 3rd International Assembly of Women. The assembly approved the launch of a campaign targeting all forms of violence faced by women in society (physical, economic, social, sexist, cultural, and access to power) which are also present in rural communities and their organizations.

Work that aims at achieving greater gender equality is not easy. Despite the formal equality, women face obstacles when traveling or attending meetings and gatherings. As Annette Desmarais (2007:282) noted:

“There are many reasons why women do not participate at this level. Perhaps the most important is the persistence of ideologies and cultural practices that perpetuate unequal gender relations and unfairness. For example, the division of labour by gender means that rural women have less access to the most precious resource, time, to participate as leaders in agricultural organizations. Being involved in reproductive, productive and community work makes it much less likely [for women] to have time for training sessions and learning as leaders.”

It is a struggle against the tide, and despite some concrete victories, we face a long fight in our organizations, and, more generally.

La Via Campesina has established alliances with various organizations and social movements at the international, regional, and national levels. One of the most significant alliance has been with the World March of Women, a leading feminist global network that has called for joint actions and meetings, and has collaborated in activities: the International Forum for Food Sovereignty held in Mali in 2007, among others.

The original meeting between the two networks was under the anti-globalization movement, and its purpose was to agree on counter-summits and activities within the World Social Forum. The incorporation of a feminist perspective within Via Campesina generated more solidarity, and this has built over time. At the Forum for Food Sovereignty in 2007 in Sélingué, Mali a meeting was convened by leading international social movements such as Via Campesina, the World March of Women, the World Forum of Fisher Peoples, and others to advance strategies within a wide range of social movements (farmers, fishers, consumers) to promote food sovereignty.

Women were a major catalyst in this meeting, as organizers and participants. The Nyéléni Forum in Sélingué was named in honour of the legend of a Malian peasant woman who struggled to assert herself as a woman in a hostile environment. Delegates from Africa, America, Europe, Asia and Oceania attended the meeting and identified the capitalist and patriarchal system as primarily responsible for the violations of women’s rights, while reaffirming their commitment to transform it.

The success of this collaboration is embodied in the dual membership of women who are active members in the World March of Women, and La Via Campesina. These experiences encourage closer ties and collaboration between both networks, and strengthens the feminist struggle of rural women that is part of the broader struggle against capitalism and patriarchy.

The current global food system has failed to ensure the food security of communities. Currently more than a billion people worldwide suffer from hunger. The global food system has had a profoundly negative environmental impact; promoting an intensive agro-industrial model that has contributed to climate change and collapsing agro-biodiversity. This system has been particularly detrimental to women.

Developing alternatives to this agricultural model requires incorporating a gender perspective. The food sovereignty alternative to the dominant agro-industrial model has to have a feminist position to break with patriarchal and capitalist logic.

La Via Campesina, the largest international movement for food sovereignty, is moving in this direction: creating alliances with other social movements – especially feminist organizations and networks such as the World March of Women – to promote networking and solidarity among women in North and South, urban and rural areas, and between them and their companions. As Via Campesina says: “Globalize the struggle. Globalize hope.” •

This post was originally part of a longer article first published in Food Movements Unite! Strategies to Transform Our Food System (Food First, 2011).

Desmarais, Annette A. (2007), La Via Campesina. Globalization and the power of the peasantry. Madrid. Editorial Popular.