Paramilitarism in the Age of Democracy

On August 20, 2012, retired Colombian military general Mauricio Santoyo, former security chief for ex-president Alvaro Uribe, pled guilty to working with the right-wing paramilitary organization, the United Self Defence Forces of Colombia. In his plea agreement, Santoyo acknowledged accepting at least $5-million in bribes from the murderous, drug-running United Self Defence Forces between 2001 to 2008, that is, during the time he served as Uribe’s anti-terror security tzar. 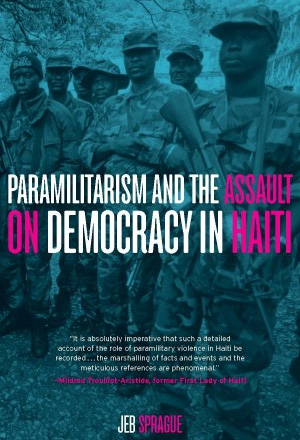 Such murderous double-dealing of course has real and murderous consequences, most of all, for Colombia’s poor. A sordid tale of institutional violence that is examined in two recent book-length studies, Julie Mazzei’s Death Squads or Self-Defense Forces? and Jasmin Hristov’s Blood and Capital: The Paramilitarization of Colombia. Coinciding with these studies, another critical addition to this chilling literature is Jeb Sprague’s Paramilitarism and the Assault on Democracy in Haiti, released by Monthly Review Press in August of 2012.

Drawing upon first-hand interviews with both paramilitaries, elites and their victims, and with corroboration provided by thousands of U.S. State Department documents (obtained through Freedom of Information Act document requests), Sprague’s incisive contribution to the historical record makes it all too clear how the U.S. government and a collection of local elites have consistently undermined democracy in Haiti – from the nineteenth century right through to the present day.

The Example of Aristide

For example, on the fateful day in February 1991 that Jean-Bertrand Aristide, a priest of the ti legiz (the small church in Haiti), became the first democratically elected president of Haiti, a coup sponsored in part by U.S. intelligence agencies was not far off on the horizon; in September 1991 no less. Proud supporters of Haiti’s first democratically elected government however did all that was humanly possible to resist this attack on their sovereignty, and for their outstanding democratic commitment they were soon cut down in their thousands by well-financed Haitian death squads.

Mass resistance to elite rule evidently had to be violently extinguished, and with the close coordination of the CIA station chief in Port-au-Prince, a new paramilitary organization, the Front pour l’Avancement et le Progrès Haitien (FRAPH) was soon formed. This would become Haiti’s leading death squad, reminding observers of the previous generations of paramilitaries (the Tonton Macoutes and the Attachés).

With well-armed enemies likes these, murders and massacres would remain a common occurrence for the Haitian populous, who in the face of such massive adversity persisted in their relentless bid for democracy. However, under such dire circumstances, Aristide’s later return to politics and the at times problematic but still continual step forward achieved by the renewed Lavalas movement was sadly met with another U.S.-aided coup in February 2004. Even with all of the internal problems and contradictions it faced, the Fanmi Lavalas movement and government were important steps forward for the country – slow steps forward that were wiped out by the 2004 coup and destabilization campaign that occurred during the few years prior.

The ensuing anti-coup backlash led by Haiti’s poor was then met by “a reinvigorated paramilitary campaign” to put down the “huge demonstrations and rallies” that were organized to demand the return of Aristide. A time rife with paramilitarism that is examined in blood-curdling detail by Sprague.

That Aristide was the people’s choice was never in question. Even Fabiola Cordova, a program officer at the National Endowment for Democracy (NED), a U.S.-based group which at the time was funding numerous opposition-affiliated groups, acknowledged in 2005 that:

“Aristide really had 70% of the popular support and then the 120 other parties had the thirty per cent split in one hundred and twenty different ways, which is basically impossible to compete [with].”

Likewise, Sprague adds, that in the aftermath of the coup, even U.S. Embassy official Luis Moreno admitted that Aristide could easily have been re-elected if given a chance.

But democracy was not what Haitian elites, or their U.S. allies (like the NED) really had in mind for Haiti. Instead working closely together they have sought to create a political scenario that first and foremost served the interest of global capital. Thereby engineering a form of low-intensity democracy – with the help of paramilitary forces when needed – that firmly places economic before human needs. Sprague argues essentially that with the winding down of the cold war and the emergence of capitalist globalization, that paramilitaries could no longer be used in such a permanent way, but rather have increasingly been used off and on – at certain time periods going into hibernation and then being redeployed when required.

The Return of Duvalier

Vital for this continuing historical process of paramilitary violence has been the high level of impunity for paramilitary criminals and their backers, with even the most violent paramilitary bosses no longer facing justice after the 2004 coup (such as Louis Jodel Chamblain, who Sprague interviewed). This is further illustrated by the return of Jean-Claude “Baby Doc” Duvalier to the country in 2010 and the failure of Haiti’s judiciary to arrest him and put him on trial for his crimes against humanity.

As far as many from dominant groups were concerned, if the Haitian populous were adamant to resist the imposition of bourgeois leaders upon their polity, then they could just expect more death squads; that is, until they lowered their democratic aspirations suitably. Or as U.S. Ambassador to Haiti, James Foley, put it more diplomatically in one cable that Sprague obtained (dated July 12, 2004):

“It is equally plausible that Aristide succeeded in permanently raising the political and social consciousness (not to mention the expectations) of Haiti’s disadvantaged masses, and thus created a force which the next generation of political leaders will either have to placate or manipulate.”

Political manipulation, occurring through groups like the NED and their subsidiaries (like the International Republican Institute – IRI) is regarded as a strategic priority by the U.S. foreign policy making establishment. In one rare excellent piece published by the New York Times has shown how the IRI, during the months and years leading up to the 2004 coup, facilitated conferences in Santo Domingo in the Dominican Republic where Haitian elites from the political opposition to Lavalas met with the leadership of the paramilitaries.

While ‘democratic’ carrots have always come before the application of the paramilitary stick, paramilitary violence has played an important role in attempting to retard the majority’s democratic temper. Haiti’s disadvantaged masses evidently conscious of their own political interests, have seen through the lies of elite driven political parties – a major reason for the continual use of paramilitary violence against them.

Sprague’s exhaustive study thus fulfils a vital role by providing the necessary documentation to demonstrate exactly how such violence has been deployed time and again by ruling elites (both Haitian and foreign) in their ongoing efforts to crush popular or left-leaning democracy.

Sprague’s book is also important because of the detail it provides on the local social conflict within Haiti, and it is really the first major study to delve deeply into the covert role of some state elites in the Dominican government in backing Haitian paramilitaries. The Dominican Republic is the only country bordering Haiti, with both country’s on the island of Hispaniola. With xenophobia against Haitian migrants a long-standing trope of the Dominican Republic’s class system, most Dominicans likely know little of the role that their government has played in backing violent paramilitary groups.

Similarly, despite the central-role played by the U.S. government in Haiti (or perhaps because of it’s role), for many North American readers, most of Sprague’s story of grotesque state violence will come as a shocking revelation. Here many from the mass media are as much to blame as some corporatized human rights organizations (like Human Rights Watch) of whom Sprague takes to task for ignoring major human rights abuses targeting Haiti’s excluded poor majority.

For instance, in the United States mainstream reporting on Haiti, during the time period Sprague studied, often inverted the true narrative. And on those rare occasions when accurate articles were published which threatened elite-driven fairy tales – which take glee in recounting Aristide’s supposed legacy of violence – powerful gatekeepers often quickly stepped in to stop their uptake. Here it is valuable to think of Noam Chomsky and Edward Herman’s propaganda model showing how business media continually propel dominant elite narratives.

Here Sprague writes that New York Times journalist Walt Bogdanich explained to him that in all his decades working as a reporter he had never received such a strong and negative response from powerful figures as he did for the article he published on the role of the International Republican Institute in destabilizing Haiti’s democracy.

Sprague also points out that between October 17, 2000, and February 5, 2004, the Associated Press carried 680 articles that were mainly about Haiti: “Only ten articles covered the role of paramilitaries…” Moreover, he continues, while the Associated Press categorically “failed to report on the extent to which Haitian elites were backing the paramilitaries or that Dominican government officials were hosting them, other corporate media rehashed the obfuscations and excuses provided by elites and foreign government officials.”

Lessons must always be learned from history. Which is precisely why Sprague’s book is a must-read for all those who wish to learn how local and transnational elites, and powerful sectors from state apparatuses such as the U.S. government connive to crush democratic movements for social change. •

Michael Barker has been writing for alternative media outlets since 2006, and at present is a regular contributor to Swans Commentary. His work has been published by many media organizations, including Corporate Watch (UK), Countercurrents, CounterPunch, Green Left Weekly, and Znet. He is a contributor to Corporate Watch's forthcoming book Managing Democracy, Managing Dissent: Capitalism, Democracy and the Organisation of Consent. He maintains a blog at michaeljamesbarker.wordpress.com.