Joining Forces for Another Europe

In Europe we are living in particularly dramatic times. Democracy is in death-agony and we are witnessing post-democratic processes taking over at the national and supranational level. EU leaders have further concentrated decision-making power on public and fiscal policies in the hands of an oligarchy of governments, technocrats and the European Central Bank (ECB), which are subject to the dictates of the financial markets. Neoliberalism, the real cause of the crisis, not only is not dead, but it appears to be in perfect health: it uses the crisis to destroy social rights and workers’ rights and to privatize commons, public goods and public services. 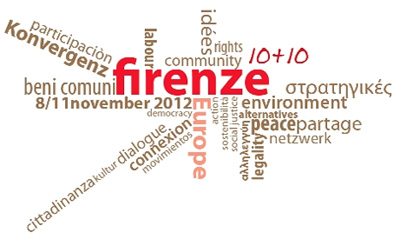 Finally, the most incredible propaganda operation of our times is in full swing, in which states and ‘markets’ try to make people believe that public debt was caused by excessive social spending and high salaries. In fact the financial sector caused the crisis and the fiscal deficit in the EU is the result of the crisis, not its cause.

A moment like this needs a strong social answer: it is urgent to act now, uniting our forces, creating the conditions for a common social response, for a pan-European mobilization. There is an objective need to build a European space of ‘strategic alliances’: in order to elaborate common strategies and initiatives and to rebuild solidarity. When the attack on Greece by the great economic powers and the ‘troika’ [the International Monetary Fund, the European commission and the ECB] began, we, in Europe, were unable to organize a social response. Rather, each stayed wrapped up in their own crisis and their own national dimension, leaving the Greeks alone. It must never happen again.

We must go beyond the current fragmentation of our forces. Most of the time, we agree on analysis and proposals – now in Europe we have hundreds of similar documents, calls, statements which are a good basis for a common platform – but we need to join forces.

Firenze 10+10 is only a contribution to a more general process [November 8-11, 2012]. The European space today is the minimum space necessary if we are to build a credible social and economic alternative. To underestimate the global dimension of the clash between capital and labour, capital and nature, capital and the commons is a mistake. In Firenze we want to provide to the real social actors with a useful space for alliances and strategy at the European level, linking up the local resistance and struggles.

We must also break down the wall between eastern and western Europe by getting the east and the Balkans fully involved. And of course we must build bridges toward the southern Mediterranean, where the next WSF will be held in 2013.

Finally, it is necessary to have a long-term vision. That’s why the name is 10+10: Ten years after the 2002 European Social Forum (ESF), but above all ‘plus ten’: which shows the need to build a common strategy and vision for the next ten years and not limit our horizons to tomorrow, to the next political elections. It is a question of understanding which way we want to go.

Firenze 10+10 is an experiment, building on previous experiences and processes: a space for reconnecting, in an action-oriented way. It is not a European Social Forum (ESF), despite the fact that the ‘excuse’ for setting the process in motion was precisely the tenth anniversary of the first ESF. The ESF constituted an extraordinary moment in the construction of a continent-wide demos, which presented analyses, proposals and solutions which – had they been translated into policies – would have avoided Europe and the world crashing into the terrible economic, environmental, social and democratic crisis in which it is now mired.

“For sure it is no longer the time for spreading ourselves out over thousands of workshops and seminars, but time to produce a nucleus of strong, shared actions and initiatives.”

Ten years on, there is no desire to celebrate what we had then and even less do we intend today to repeat paths which belong to that time and that stage of development. The social movements have changed, new actors have emerged, there have been defeats but also victories, such as that of the water and commons movement in the Italian referendum one year ago. For sure it is no longer the time for spreading ourselves out over thousands of workshops and seminars, but time to produce a nucleus of strong, shared actions and initiatives.

That’s why the programme for Firenze 10+10 is not simply a space to be filled up with hundreds of disconnected initiatives (nor a sort of ‘Summer Academy’ for social movements). On the contrary, we have together identified, during the preparatory international Milan meeting, five key ‘alliance spheres’ (or focus areas), starting from the subjects which networks and coalitions are already working on in Europe.

Networks, social movements and organizations from all over Europe intend to oppose the top-down constituent process with a grassroots approach, in order to build a democratic Citizens’ Pact (the foundation for a democratic Europe based on respect for the dignity of everyone, native and non-native, and on guarantee of individual, collective, labour and social rights). It is also a question of building a democratic floodwall against the right, against xenophobia, against the breaking up solidarity: democracy also means rebuilding social solidarity.

During Firenze 10+10, we will discuss both public and private debt with the purpose of formulating new proposals for another European economic model, free from financial markets and debt dictatorships and based on the solidarity and participation of people into the decisions that determine our future. This will bring together campaigns against austerity, the European fiscal compact, and for debt audits and tribunals.

Labour rights cannot be separated from social rights in general and there is a need to propose concrete alternatives to give everyone a life in dignity and jobs with a future. Many different proposals are to be discussed, including a universal basic minimum income.

This ‘alliance sphere’ brings together many issues in relation to our natural, social, digital commons and public services, such as land, food, water, energy but also social rights, education, and knowledge. It will also tackle and refute the post-Rio agenda covering the green economy, financialization of nature and unnecessary large-scale infrastructures which are supposed to help us out of the crisis. The aim is to find mutual ground and strategic joint actions as well as concrete solidarity solutions for those fighting right now on the ground to protect their public services and commons from privatization and commodification.

5) Europe in the Mediterranean and the world

This sphere of alliance rests on some fundamental elements: the necessary inclusiveness of Europe; cooperation, solidarity and fair trade; peace and social justice; the support for the struggles for democracy and human rights (the Arab revolutions, the struggles against the occupation – Palestinian territories, Western Sahara – and rights of entire peoples like the Kurds). Strategies against the militarization of the Mediterranean will also be discussed.

In the best-case scenario Firenze 10+10 could produce a hard core of proposals for action, which are the fruit of the five ‘alliance spheres’ when we converge, and launch a sort of grand common European mobilization for the beginning of 2013: a continent-wide demonstration? An international rally in Brussels? A European strike? We should at least try to identify something which we can all do together.

At the same time, we aim to build a third level: to start together a process for the medium-long term. One of the main ideas and proposals is the launch of the ‘Alter Summit’ as a process that will start in November and have several stages including various mobilizations and a culmination point for 2013 in late spring, probably in Athens.

In Firenze many existing processes will flow together: the first gathering of the European Water Commons Movement; a big assembly on democracy, which will bring together very different actors (including 15M in Spain and Blockupy Frankfurt); the meeting of the different coalitions working on finance and debt; the meeting of critical economists, just to mention some examples.

Firenze 10+10 is an opportunity and a contribution. It is not a process in itself: it’s a crossroad part of more extended process. Maybe this process is not perfect and November is just round the corner, but our enemies – the economic-financial powers, the technocrats – are very fast, while at the moment we’re too slow and fragmented. •

Tommaso Fattori is an Italian anti-privatization activist and member of the Firenze 10+10 organizing committee.