“They call it democracy but this isn’t one” was the cry repeated in the squares and on the demonstrations. And as time went by, this slogan took on still more meaning. The stigmatization and repression against those who struggle in the street for their rights has only intensified in recent times. The worse the crisis gets, the more popular support broadens for those who protest and the more the brutal repression increases. The thirst for liberty is being smothered along with the current “democracy.” 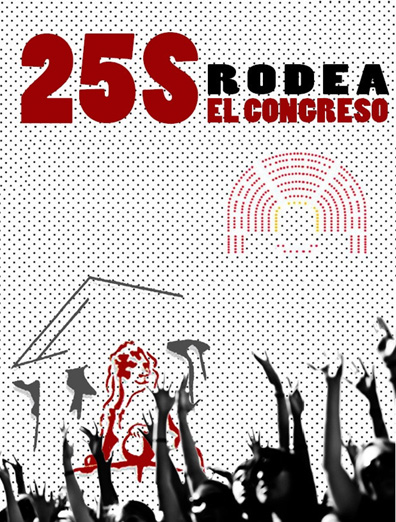 Recent days provide a good illustration of this. On Saturday, September 15, 2012, when activists were detained during the demonstration against austerity in Madrid, what was their crime? Carrying a placard with the slogan: “25S: Encircle Parliament.” The next day, two wagon loads of police carried out identity checks on dozens of people in the park at Retiro. The motive? Participating in a preparatory meeting for the said action. Five days later, several of these activists were charged with offences to the highest institutions of the nation and they could be jailed for up to one year.

What were the objectives of the “25S: Encircle Parliament” action? Its appeal expresses them clearly: “Next September 25, we will encircle Parliament to save it from a kidnapping which has transformed this institution into a superfluous body. A kidnapping of popular sovereignty carried out by the Troika and the financial markets and executed with the consent and collaboration of the majority of the political parties.” What will be the form of this action? Its organizers have said and said again: “non-violent.” What kind of fear is it that dictates all these police measures? Fear of violence, or of freedom of expression?

As I said a few months ago at a social centre: “When those at the bottom move, those at the top tremble.” That is the truth. Fear has begun to change sides, even if only partially. The repressive measures, like those we have mentioned, show the fear of those who exert power. The fear that the people rise up, organize, express themselves freely against injustice. The fear of a handful faced with the multitude.

The criminalization of “25S: Encircle Parliament” practically began a month ago when the government representative in Madrid, Cristina Cifuentes, characterized this initiative as a “disguised coup d’état.” The former minister and PSOE deputy José Martínez de Olmos compared the action to the attempted neo-Francoist coup by Tejero in 1981: “Occupying Parliament from the inside as Tejero did or from the outside as some wish on September 25 has the same goal: the sequestration of sovereignty.” Words repeated yesterday by the PP secretary general, Dolores de Cospedal.

Coup d’état? The only putschists here are the financial powers who overthrow governments as they wish and replace them by their trusted henchmen. In Italy they have sidelined Silvio Berlusconi in favour of Mario Monti, a former consultant for the Goldman Sachs bank. In Greece, they have replaced Giorgios Papandreou with Lucas Papadémos, ex-vice president of the European Central Bank. Spanish Economy Minister Luis de Guindos is a former employee of Lehman Brothers. As the journalist Robert Fisk puts it: “The banks and the ratings agencies have become the dictators of the West.” And when the “markets” come in by the door, democracy goes out the window.

It is difficult to believe today that Parliament “represents the popular will.” A good number of ministers and deputies come from private enterprises, others return there as soon as their political careers end. The companies reward them generously for services rendered. Do you remember Eduardo Zaplana? First Minister of Employment, then consultant to Telefonica. Elena Salgado? Vice minister of the Economy, she became a consultant for Abertis. Not to mention Rodrigo Rato, former Economy minister, then director of the International Monetary Fund and finally president of Bankia. His adventures as head of the bank have cost us dear. Without forgetting former prime ministers Felipe Gonzalez and José Maria Aznar, the first becoming a consultant for Gas Natural and the second working for Endesa, News Corporation, Barrick Gold, Doheny Global Group and so on. So it goes.

But democracy is, precisely, what the movement of the indignant is demanding, a real democracy in the service of the people and incompatible with the sequestration of politics by the business world or with the Spanish centralism which denies the right of people to self-determination. Paradoxically, it is the protestors who have been deemed to be “anti-democrats.” Anti-democrats for symbolically “besieging” the Catalan parliament on June 15, 2011, during the budget debates which involved austerity measures which had not appeared in any electoral manifesto. Anti-democrats for organizing meetings in the squares and stimulating public debate. Anti-democrats for occupying empty housing and putting it to social use. Anti-democrats, definitively, for combating unjust laws and practices.

And when there is more democracy in the street, there is more repression. Fines of 133,000 Euros are demanded by the Ministry of the Interior against 446 activists of 15M in Madrid; 6,000 Euros against 250 students involved in the “Valencia Spring”; hundreds of Euros against activists in Galicia, to mention only a few examples. Along with that, more than a hundred arrests in Catalonia since the general strike on May 29 and a modification of the Criminal Code to criminalize the new forms of protest.