Spanish State: They Want Us Poor, Silenced and Straight

The governing Popular Party (PP) is on a crusade – not only against fundamental rights such as health, education, housing, work, but also against sexual and reproductive freedoms. The PP wants to impose a model of society, not only at the service of capital, but sexist and homophobic to boot. It wants us poor, silenced and straight. 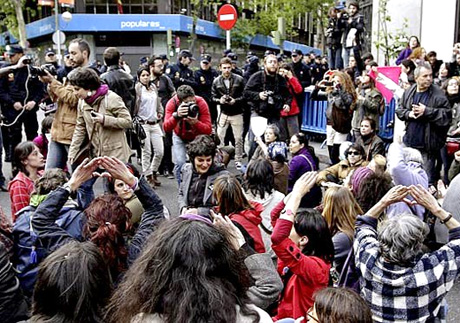 Last week the Government proposed to the Spanish regional governments that they veto, within the public health system, assisted reproductive treatment (artificial insemination and in vitro fertilization) to lesbians and single women. A measure that threatens equal access to public services and discriminates against those who do not conform to the strict hetero ‘standard.’ If you are female, poor, lesbian, or you are single, you are forbidden to get pregnant. For the PP, without men there must be no children. In this way, the Right imposes its family archetype: a straight couple.

We are facing a government that is shocked that two women can be mothers, that two men can be fathers, that a lone woman may have daughters and sons, but it does not feel the slightest shame in pursuing policies that lead to hunger, unemployment and evictions. It is the double standard of those who do not have any principles. Who are only obedient to the doctrine of capitalism and patriarchy.

Yesterday in a feminist protest outside the Ministry of Health in Madrid, called precisely to condemn this measure, the response was repression. This is a government that pursues and criminalizes those who refuse to be silent. The politics of the truncheon is the other side of coin of their ‘politics of cuts.’

Here’s another example. The Ministry of Health, Social Services and Equality plans to leave out of official statistics the abuse of women who, despite being attacked, do not visit the hospital or whose hospital stay is less than 24 hours. Which means the majority of cases will remain hidden. Could it be that the figures are getting out of control?

In the first quarter of 2013, 1,100 women per month signalled injuries when reporting attacks by men, according to the Observatory for Gender Violence of the General Council of the Judiciary. This, however, represents a minority of cases. In 2012, according to the same organization, in only 11 per cent of the 128,000 complaints for abuse did women notify that they had been injured. For some, it seems, it is better to hide or disguise the reality, rather than fight it.

And to all of this must be added the offensive by Minister Alberto Ruiz-Gallardón to change the already limited abortion law, turning the clock back to the era of ‘the caves.’ A change that, in the words of the minister, will take place in the next three months. The future law, everything seems to indicate, will be more restrictive than that of 1985, only allowing pregnancy to be terminated in certain, very limited circumstances.

Among the cases that are being earmarked for removal from the current law, is the malformation of the fetus. According Gallardón, the reform aims to “increase the protection of the quintessential right of women: that of motherhood.” And I wonder: Motherhood in whose hands? Women or the State?

In short, this is an attempt by the PP to take control over, and legislate about our body. These measures ultimately add up to a political solution to the crisis that sees women returning to the home. When cutting public services such as health, welfare, social services, there will be a whole area of care work, invisible, undervalued, but essential, that will end up being done, again, by women. It is us who, above all, will bear the burden of the cuts to the welfare state.

We face a right-wing government that is sexist and homophobic. The response to this can only be at once left-wing (not talk, but action on the streets) and feminist, in defence of sexual freedoms. •