The Catalans have a phrase: em planto. It has a double meaning: ‘I plant,’ or ‘I’ve had enough.’ At end of the huge 15 October demonstration of Indignados (‘outraged’) in Barcelona – the papers put it at around 250,000 – we were greeted with an impromptu garden under the Arc de Triomf, the end point of the march. Campaigners for food sovereignty had planted vegetables in well-spaced rows, ready for long term cultivation. 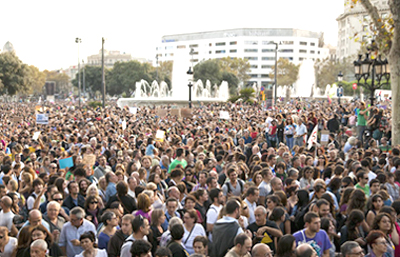 The point was partly an ecological one. But the surrounding placards indicated that the gardeners also intended it to make a symbolic point about the broader significance of the march. “Plantemos” declared a large cardboard placard, meaning: “we plant ourselves” – “we stand firm.”

Mariel, who was dressed as a bee – essential to flourishing horticulture and now facing pesticidal destruction – explained that the activists who organized the garden were part of the agro-ecology bloc on the march. The march as a whole had several layers of self-organization that became apparent at certain moments. There were three main focal themes – all issues on which active alliances had come together over recent months: education (yellow flags), health (green flags) and housing (red flags).

As we approached the Arc de Triomf, someone on a loud hailer announced that the different directions in which those following each of the themes should go, guided by an open lorry carrying the appropriate flag. The idea was that the demonstration would end not with speeches to the assembled masses, on the traditional model. Instead, the plan was to hold assemblies to discuss action and alternatives to cuts and privatization.

News came through later in the evening that two of these assemblies had taken action, leading an occupation of a third hospital – two that were making redundancies had already been occupied the day before the demonstration. They had also squatted a large unoccupied building to turn it into housing for ten families. Evictions have become a focus of intense conflict in Barcelona as the numbers grow every day.

As well as clusters around themes, it was the regular neighbourhood assemblies, feeding into an occasional assembly of assemblies, that were the organism that gave the demonstration its impressive life.

The neighbourhood assemblies emerged in early summer this year, following the birth of the Indignados movement in the occupations of the squares of Spain and Greece. As the occupation of Barcelona’s Plaça de Catalunya reached its peak toward the end of May and the general assembly in the square began to plan its future, the locus of organized indignation spread to the neighbourhoods – sometimes reviving or connecting with pre-existing neighbourhood associations, sometimes building on quite dense social bonds. For example, the assembly from Sant Andreu, a predominantly working-class neighbourhood in the north of the city, marched for over an hour to reach the demonstration, proudly announcing their assembly on their yellow T-shirts.

Like many on the demonstration, they brought handmade placards. Some of their slogans were specific: “education is not for sale,” “for high quality education; against the cuts.” Others were more general: “nothing to lose; all to gain,” “the system is dead, the people are alive.” A lot of these homemade banners highlighted the exhaustion and corruption of the political system, one offering a reward: “2,000 euro for an honest politician.” Abstentions could be high in November’s elections. [Ed.: for election results see here.]

There is disillusionment too with trade unions. In the occupation of the square earlier this year, it was not only parties that were not wanted, but also the unions. They had been part of a social contract with the government that had let workers down, leading to a fall in wages and weak protection. Most significantly, they showed no concern – and often hostility – to the growing numbers of people, especially among the young, who had no chance of a long term job. Yesterday only the CNT (Confederación Nacional del Trabajo), the union founded by the anarchists and still less bureaucratized than other trade unions, dared show its face.

Interestingly, though, there are signs of workers recovering the confidence to organize in their workplaces as a direct result of the collective action taking place on the streets, and waking up the unions in the process.

Bea recently worked in a call centre. She remembers the fear that made her fellow workers timid and passive. She was impressed that after the occupations of the squares, the call centre workers went on strike over injustices they had previously suffered in silence. “It was as if the strength of the example of collective action on the square gave them the confidence, broke through the fear,” she said.

Where this kind of awakening will lead is unclear. General goals are clearly expressed: real democracy based on popular assemblies in the neighbourhoods, reform of the electoral system for different levels of government, the right of referendums including on the European level, an end to cuts and privatization of public services, banks and finance under public control, economic development based on co-operation, self-management and a social economy – the list is long and elaborate (see here, for example).

The important, distinguishing feature of this vision of change is that it is not centred on what governments should do. Rather it is a guide to action at many levels, starting with what the people can do collaboratively, through spaces they occupy, resources they reclaim, new sources of power they create. There is a self-consciousness that the creation of far-reaching alternatives will take time. In conversation, the slogans are put in context: “we’re going slowly, because we are going far” is a common saying.

One thing is certain: the energy, creativity and will comes from outside the existing institutions. Bargaining, pressure, people and organizations that bridge the outside and the inside will no doubt be part of the process of change, but the established institutions have lost the initiative.

There is no bravado about this. Among those I talked to on our way home from the Arc de Triomf and the improvised garden, there was anxiety as well as elation at the size and success of the demonstration. “I feel some people are looking for leaders,” said Nuria, a translator and free culture activist.

But in the many levels of organization producing this impressive show not only of anger but of serious engagement in creating alternatives, it becomes clear that this is not a ‘leaderless’ movement. It is emerging, experimentally perhaps, as movement where leadership is shared and is learnt – a movement that can grow and flourish as well as stand firm. •

This article was first published at Red Pepper.