The Next Banking Crisis

In the ongoing Euro-crisis, our political leaders are constantly criticized for ‘playing catch-up’ and not being ‘ahead of the curve’ (although others might feel that they are completely round the bend). Perhaps, therefore, it is time to look up from the turmoil in the sovereign bond markets and the counsels of the European Union, dust off the crystal ball, and look forward to the next banking crisis. For it is becoming increasingly clear that banks across Europe face a much more serious problem than a 50 percent haircut on their holdings of Greek government bonds; and that problem goes to the heart of what is wrong with the current culture and practices of the financial sector.

A bank draws its income from three main sources: shareholders, depositors and lenders. The shareholders provide the risk capital, as in any capitalist business. Depositors seeking a safe and convenient place to store their money traditionally provide the bulk of the funds which the bank then lends to its clients, while holding a modest proportion in reserve to meet any possible withdrawals by depositors. And lenders provide additional funds by buying marketable securities issued by the bank in the form of bonds. 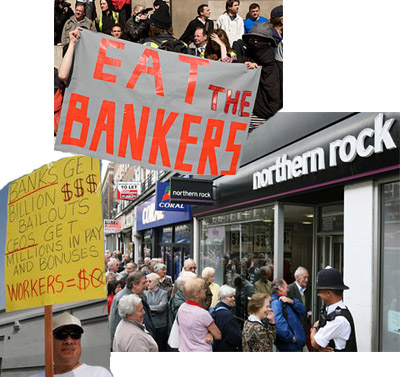 In the run-up to the 2007-08 banking crisis, banks expanded their activities very rapidly by increasing their income especially from the last of these three. The higher risk attached to equity means that it is an expensive source of funds, ruled out except when absolutely necessary or required by state regulators. Growth in deposits is broadly limited by the rate of growth of economic activity, since winning a higher share of total deposits from one’s competitors involves costly investments in marketing or service quality. But in the conditions of feverish growth at the height of the boom, borrowing is easy and cheap, so banks like Royal Bank of Scotland (RBS) and Lehman Brothers threw caution to the winds. Not only did they increase their debt levels massively in relation to their equity capital and reserves, but they also kept down the cost by borrowing for relatively short periods of 1 to 5 years. They believed that they would have no difficulty in ‘rolling over’ these debts when they fell due – or even that they could redeem them with cash, either from the vast profits they expected to make, or from new equity issues.

But like all credit booms, this one ended in a massive crash. Beginning in the sub-prime household mortgage sector in the USA, rising default rates on loans opened up the fantasy world of no-risk finance. The widespread use of derivatives, developed on the basis of models that bore little or no relation to the actual functioning of financial markets, had meanwhile created chains of potential contagion that reached to the furthest corners of global finance. As investors began to appreciate the real risk to the market value of their financial assets, there ensued a classic flight to cash; as a consequence the wholesale money markets, in which banks borrow from each other and from other investors, began to freeze up. Bank debts falling due could not, in this situation, be rolled over; the main source of discretionary funding for banks disappeared. As so often Britain led the way, with the collapse of Northern Rock in September 2007, and the slide into the global banking crisis began.

Now it is true that central banks and governments succeeded in stabilizing the banking systems in most countries through the provision of massive infusions of funds, whether in the form of equity (as in the UK government stakes in RBS and Lloyds), loans from central banks, or cash from central bank purchases of financial assets held by banks (notably through quantitative easing). It is also true that, as the world economy began an apparent recovery in 2009, there ensued also a certain growth in bank deposits, and a recovery in the market price of bank shares which even allowed some banks to raise new equity or loans.

But banks still have huge amounts of outstanding debt, issued during the boom years, which will contractually fall due in the next few years: for example, Lloyds Bank currently has £295-billion of wholesale funding, half of which matures within the next twelve months.[1] And according to Deutsche Bank analysts, “European financial institutions need to finance nearly €2,000-billion over the next five-year horizon,” while net issuance of bank debt has been negative for three consecutive months, and credit spreads[2] have returned to the record levels of 2008.[3]

What is more, last month it was reported that the cost of Eurozone bank credit default swaps (CDS) now exceeds the level reached at the time of the Lehman Brothers collapse in 2008. And “… the CDS market is the canary in the coal mine, sending alarm signals elsewhere and potentially causing bigger sell-offs in shares and bonds than might have happened otherwise.” Hence the efforts being made by Eurozone politicians to limit activity in the CDS markets by banning “naked trading … the buying or selling of the instruments without owning the underlying bonds” – a move doomed to failure because London is the main centre for such trading, and the UK government refuses to agree to it, not wanting to hit a significant source of income for City traders.[4]

When rating agency Moody’s ‘downgraded’ twelve British lenders in early October, the only reason given by the agency was that the Vickers Report on the reform of British banking presaged a reduction in the degree of automatic government support for lending institutions in the event of a future crisis.[5]

But the problem of refinancing the debts of European – including British – banks in the next few years surely provides a much more valid reason for questioning their creditworthiness. It may also help to account for the failure of Project Merlin, and the feebleness of the Vickers Report’s recommendations on the separation of retail and investment banking activities. •

2.
“Credit spread” means the additional interest rate that must be paid compared to that of a designated risk-free bond of the same maturity.