Britain: The Health and Social Care Bill and the Negation of Democracy

In voting, in the British House of Commons, for the third reading of Andrew Lansley‘s Health and Social Care Bill last week MPs voted to replace the National Health Service (NHS) as a public service with a system of competing businesses – foundation trusts, social enterprises and for-profit corporations. The government’s claim that the Bill does not mean privatization is plainly specious: the truth of the matter is to be found in what Lansley’s health minister, Lord Howe, told a meeting of private health businessmen on the day the Bill was approved. He said it presented ‘huge opportunities’ for the private sector, and noted that commissioners of health care would be barred from favouring NHS providers. The truth is also to be found in the government’s leaked plans to hand over the management of NHS hospitals to private companies, and in the current and promised large-scale opening up of NHS work to ‘any qualified provider.’

Lord Howe reiterated Tony Blair’s dictum that it doesn’t matter who provides care, so long as it is free to the patient. What this does is to treat as irrelevant everything that follows from introducing market dynamics. The basic fact about health care is that high quality care depends on a sufficient ratio of skilled staff to patients, whereas in the long run profits can only be made by reducing the skill-mix (to lower the wage bill) and cutting staff ratios. The resulting decline in care quality is already evident in privatized long term care and home care, and is now beginning to be seen in community health services and GP services. Once NHS trusts have to compete with for-profit companies they will be forced to follow suit. 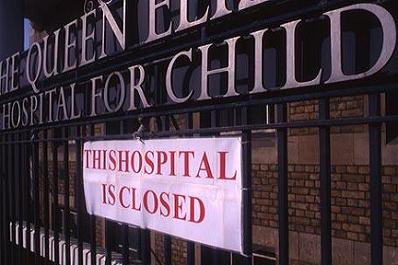 The erosion of quality will be reinforced by two other powerful factors: a) the cuts being imposed in the NHS budget, leading to the withdrawal of some services and the scaling back of others; and b) rising costs due to marketization. The costs of market-based health care – from making and monitoring multiple and complex contracts, to advertising, billing, auditing, legal disputes, multi-million pound executive salaries, dividends, fraud, and numerous layers of regulation – will eventually consume 20 per cent or more of the health budget, as they do in the United States. Neither the Care Quality Commission nor NHS Protect (the former NHS Counter-Fraud Unit) is remotely resourced enough, or empowered enough, to prevent the decline of care quality or the scale of financial fraud that the Bill will introduce.

The effect will be that people with limited means will be offered a narrowing range of free services of declining quality, and will once again face lengthening waits for elective care. To get high quality and more comprehensive care people will have to pay for private insurance and private care, if they can afford to. More and more NHS hospital beds will be occupied by private patients, further reducing the resources available for free care. Fixed personal budgets, like those already given to people for social care, are to be introduced for a growing range of chronic conditions, allowing those with resources to top up their allocations while leaving the rest to make do with ‘basic’ NHS provision.

None of this is wild speculation. It is either already happening or announced or readily foreseeable on the basis of current policy. To deny that the Bill means privatization and the end of the NHS as a comprehensive service equally available to all is like denying that the earth is round.

The fact that MPs have nonetheless endorsed the Bill reveals something more serious than an ideological blind spot. It shows that they don’t really care that they are flouting the wishes of the electorate. David Cameron promised categorically that there would be no further top-down reorganization of the NHS, but is pushing through a reorganization that amounts to a destruction of it, against the known wishes of a large majority of voters. Governments, we are told, must often take unpopular decisions. But this is not some incidental measure. We are talking about something fundamental to what, for more than half a century, has played a key part in making Britons equal citizens, and Britain a civilized and humane country. If democracy doesn’t mean that governments have to respect public opinion on something as important as this, what does it mean?

It is no less depressing that the Department of Health has been reduced to peddling more and more brazen lies, such as its ‘Department of Health Myth Buster’ document, published to coincide with the Third Reading debate. The principle seems to be that that if an official lie – such as that the Health Bill does not mean privatization – is repeated often enough, most people will feel it must be true. Democracy depends on voters having trustworthy information. If we cannot trust departments of state, run by public servants, to tell the truth, who can we trust?

Defence of the NHS?

But most depressing of all is the failure of any organization to mount a serious defence of the NHS. To call Labour’s opposition to the Bill weak is to give it too much credit. The NHS was Labour’s greatest social achievement. To have made no serious effort to defend it now ranks as one of the greatest, and at first sight one of the most puzzling, political betrayals in modern British history. The immediate reason evidently lies in the fact that New Labour prepared the NHS for privatization, as Conservatives like to point out, and failed to be honest about it. But Ed Miliband was elected leader of the Labour Party on a promise to break with the legacy of Blair and Mandelson. Why would he not then break with the legacy of Milburn, Reid and Hewitt, their faithful water-carriers in relation to the NHS? And why have the unions, and the medical and nursing professions, not mounted a sustained and serious campaign to defend the NHS? 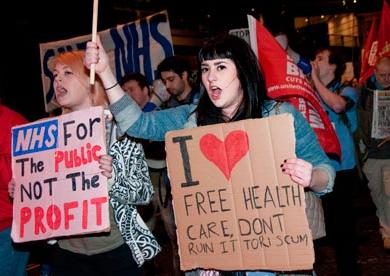 The reason lies, I think, in a broader pathology. At every level we see an anxiety to conform – not to be dubbed ‘unrealistic,’ ‘out of touch,’ ‘difficult,’ ‘radical,’ ‘ideological,’ ‘leftist,’ ‘Old Labour,’; a prevailing unwillingness to challenge the dominant discourse and the forces that underpin it. I don’t know about MPs, but so many professional leaders and managers, and many ordinary rank and file too, seem more afraid of being seen as out of step with the establishment than as having failed to stand up for what they believe in, or what their constituents want. There is a profound lack of confidence and independence.

Any attempt to account for this must include two obvious factors. One is the power of market forces, strongly felt but most of the time unacknowledged. People know, without wanting to think about it too closely, that the power of the financial markets, which lies behind the power of corporations like United Health and McKinsey, is ultimately driving policy. They feel that when all is said and done it is, really, just quixotic to stand up for any policy that may be said to be at odds with what Blair and Mandelson liked to call the ‘new reality.’ The other factor is the near-disappearance of collective organization and action. People feel alone. If we take a stand, who will support us? Certainly not our party leadership, or our department head, and possibly not even our union. Instead we are all too liable to be marginalized and even punished. And so no clear, principled challenge is made to the tightening grip of market forces by those in a position to do so.

The one encouraging qualification to this is the impact of the new social media: 38 Degrees, Facebook, expert bloggers and tweeters. Along with the million-plus people who work for the NHS a steadily growing portion of, especially, younger voters, have been exposed to a different narrative on the destruction of our social infrastructure, and not least the NHS. They see through the spin. At the moment most of them may be more cynical than politically active. But if the Bill becomes law and the reality begins to be felt in people’s daily lives it is this counter-narrative that will take hold, and cynicism will give way to anger.

Eleven years ago, in the autumn of 2000, I summed up the prospects for the NHS as follows:

“It is not difficult to foresee that [the NHS] is destined to reach a point when resistance to privatization has been sufficiently weakened and disheartened, and the market forces surrounding it [have been] sufficiently strengthened and emboldened, that further, more radical measures will become practicable. The conjuncture of a pro-market government and an economic downturn… would provide the context. The link between medicine and science… would be displaced by the link between medicine and profit.” (Market-Driven Politics: neoliberal democracy and the public interest, p. 207)

It’s usually nice to be proved prescient. On this occasion I just feel angry, and not only about the impending loss of the NHS. But I don’t believe the electorate will remain pacified indefinitely. Events will force a change.