The Path for Venezuela Cannot Be Neoliberalism or Stalinism

Edgardo Lander is Professor of Social Sciences at the Universidad Central de Venezuela in Caracas. Lander is one of the leading thinkers and writers on the left in Venezuela, both supportive and constructively critical of the Venezuelan revolution under Chavez. He is actively involved in social movements in the Americas that defeated the Free Trade Agreement of the Americas (FTAA).
He is a member of the Latin American Social Science Council’s (CLACSO) research group on Hegemonies and Emancipations and on the editorial board of the academic journal Revista Venezolana de Economía y Ciencias Sociales. He is currently part of the steering committee of the Hemispheric Council of the Social Forum of the Americas. Among other publications, Lander has written and edited: Contribución a la crítica del marxismo realmente existente: Verdad, ciencia y tecnología; La ciencia y la tecnología como asuntos políticos; Límites de la democracia en la sociedad tecnológica; Neoliberalismo, sociedad civil y democracia.

Hugo Prieto (HP): The Venezuelan process is caught between a fundamental contradiction: popular demands for democratic participation against tendencies toward hierarchical decision-making and concentration of power.
Since the 18th December, there has been a new situation in Venezuela marked by limited legislative action, due to the approval of the Ley Habilitante (Enacting Law) and the reform of National Assembly procedures. What is your reading of these events?

Edgardo Lander (EL): All of these developments effectively mark a step toward reducing the public sphere and political debate. In strict numerical terms, the Government lost the elections of the 26 September 2010. If we count the votes obtained by PPT (Country for Everyone Party), a former government ally but now an opposition party, the opposition got 52% of the votes.

The other problem was how the Assembly was constituted. The new electoral law of 2009 limited proportional representation and representation of minorities, and modified the electoral districts. This led to situations such as Caracas, where the opposition won the majority (by a small margin) of votes, yet the majority of elected deputies still belong to PSUV (United Socialist Party of Venezuela).

The electoral system, which was very good and trustworthy, has become deceitful, in the sense that it does not genuinely represent the will of the electorate. However, the reality is that with these results, the Government now lacks the necessary majority to approve leyes orgánicas (key laws) and the appointment of high level public authorities like Supreme Court Judges.

HP: Why is the government denying this reality?

EL: There is a widespread impression in this society, not just by those of the opposition but also those who have supported a process of change in all these years, that we are in a situation of deterioration, that the opposition is gaining ground including among popular sectors (as we can see from results in the areas of Petare, La Vega, Caricuao for example). This fact cannot be denied.

In December, two documents emerged that were very important. One by some leaders of PSUV called A Proposal for the Present Emergency of the Bolivarian Revolution which, apart from being a critical reflection of many problems, also emphasizes the lack of collective leadership and the absence of debate and collective construction of proposals.

The other was an editorial of the Tribuna Popular (official newspaper of the Venezuelan Communist Party), where the main concern was the lack of collective leadership of the revolutionary process. This is what the Communists are saying. Whether it is said publicly or not, support for the government is reducing, and among social organizations and Chavista supporters there is a great sense of unease as well as demands for change and correction of errors.

Radicalization can go in many directions. One could propose, as many popular sectors demand, a radicalization of democracy. This would require opening up spaces of participation, places of debate and a plurality of initiatives by Venezuelan society. But what is happening instead is going in the other direction: more hierarchical decision-making and a further concentration of power.

This is a path down a blind alley, because it is putting short-term interests first and prioritizing government control and state control, which will threaten two fundamental processes. The first is the construction of a more democratic society through participation and the construction of new hegemonies and an alternative society, and the second, is the very viability and continuity of the process of change, because once there are impositions from above they generate very little transformation.

HP: Where will this situation take us?

EL: The worst that could happen in Venezuela would be a situation where we are confronted with two options: Stalinism or neoliberalism. If that happens, we would be in a serious mess. People say, for example, that the opposition has no programme. It’s not true: they have a programme, it’s called neoliberalism. The idea of a free market, openness to foreign investment, probable privatization of PDVSA, the Venezuelan state oil company – all these things make up a packet of measures that does not have to be invented because it already exists. On the other hand, we still have to see whether it is possible to build a more democratic society, and whether socialism is necessarily Stalinism.

HP: What does it mean to be of the Left nowadays?

EL: Socialist projects and those inspired by Karl Marx in the 19th and 20th century were linked to the building of a state and developmental socialism. The collective imagination was profoundly monocultural and Eurocentric, which viewed development as the use of productive forces, science and technology, and which put liberty above necessity.

Nowadays, the challenges for the Left have various characteristics in common with the past because we are still fundamentally involved in a struggle for equity, equality between human beings. The United States is one example, where two or three per cent of the richest people appropriate ever more of economic growth and salaries for most people have remained frozen for decades. The social unease and the protests that have resulted from this explain, to a large degree, the militarization of the world.

“Being Left means basing life around an ethics of life, and fundamentally looking to act collectively. We must not destroy nature; we need a radical recognition of the plurality of our planet, of our peoples, of our issues and actions.”

This does not mean imposing an absolute equality, because that would not be democratic. But it does mean having equality as a permanent value, being involved in a constant struggle against inequality that society creates. In my opinion, being Left means basing life around an ethics of life, and fundamentally looking to act collectively. We must not destroy nature; we need a radical recognition of the plurality of our planet, of our peoples, of our issues and actions. These are the challenges: finding a balance between equality and diversity, while at the same time preserving the conditions that make life possible on planet Earth.

In Venezuela, we have witnessed immense processes of popular organization, unknown in the history of the country, and seen profound transformations of popular culture in terms of empowerment, giving people the power to intervene with dignity for their futures. This is a reality of the Venezuelan process.

But it is also in constant struggle with the concentration of power and hierarchical decision-making. Debates continue, but often decisions come out of the blue from above. It is a kind of schizophrenic world – and it runs the risk of hollowing out any participation in the process. This is what we saw in the vetoed university law, which talked about the “mode of socialist production,” of the construction of a “socialist society,” of a “Bolivarian socialist motherland,” as if just saying the word socialist would resolve the problem. But socialism cannot be used as label to prevent debate. 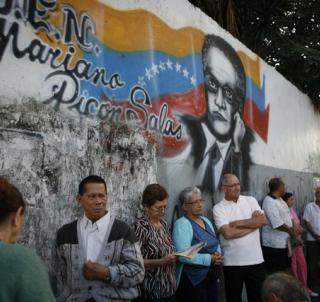 HP: What are the advantages of participatory democracy versus representative democracy?

EL: There are many reasons why a solely representative democracy has serious limitations. Nevertheless, in societies today there are problems, that by their nature, require mechanisms of representation for taking decisions. This is inevitable, and requires a democratic public sphere, which includes important components such as the media, debate and a Parliament.

Direct and participatory democracy is at the same time profoundly important for deepening democracy and for creating counter-balances against mechanisms that concentrate power that tend to accompany representative democracy. The constitution says this very clearly: it is not that participatory democracy replaces representative democracy; rather that both form part of a much deeper democratic process. [Ed.: see Bullet No. 351.]

HP: Chavismo acts as if the opposition was something lifeless, as if it is bound for failure, and therefore all its own equivocations, errors and even failures are merely difficulties, and that there is no chance the opposition will return. Do you believe that?

EL: I don’t know if the government believes it, or the opposition, or anyone in fact. The reason why there is such unease within Chavismo is because there is a recognition of serious problems.

One has to recognize the problems and rectify them in areas of public delivery, verticalism and the lack of effective democracy. Choosing to reject the problems, or treat them as inventions of the opposition, and therefore lies, is to walk onwards blindfolded and will end in disaster.

If from here on, the State closes down spaces of democracy – even with the goal of saving the government – it would mark the failure of the project, a failure to transform society and democracy. It would have devastating consequences for the whole of Latin America, for it will mark the return of the opposition and the right. •

Edgardo Lander is a professor of Social Sciences at the Universidad Central de Venezuela in Caracas.