Bolivia marked Earth Day (April 22) this year by formulating the Law of Mother Earth, which – when adopted – will establish eleven new rights for nature, including the rights not to be polluted and to continue vital cycles free from human interference.

On April 20, the United Nations General Assembly debated a proposal introduced by Bolivia, with support of other South American countries, to adopt a Universal Declaration of the Rights of Nature. The proposed global treaty says that “Mother Earth has the right to exist, persist, and to continue the vital cycles … that sustain all human beings.”

Meanwhile, Canada’s political and media establishment have organized an election campaign in which the world’s ecological crisis is barely mentioned. But a conference with more than 300 participants, held in Montreal April 15-17, showed that Bolivia’s bold approach to ecology is gaining increased support in Canada. 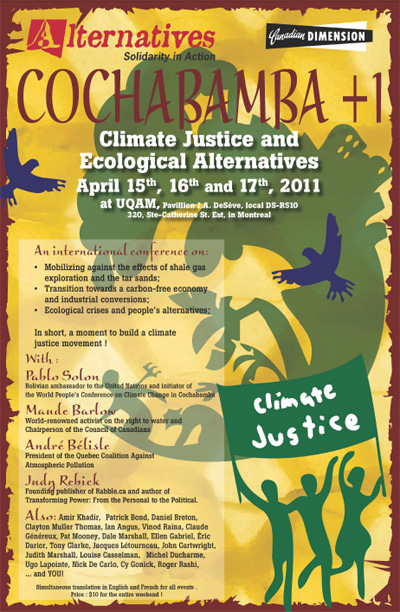 Entitled “Cochabamba+1,” the conference marked the first anniversary of the April 2010 gathering in Cochabamba, Bolivia, which launched a world movement to defend the “rights of Mother Nature.”2 [Ed.: see Bullet No. 347 and Bullet No. 351.]

In a Skype-transmitted keynote address, Bolivia’s ambassador to the UN, Pablo Solón, told the conference that:

“the spirit of Cochabamba is everywhere – a global movement without which we will suffer a world catastrophe.

“The capitalist plan is to place values on all the services that nature provides,” Solón added. All of nature could then be bought and sold. “That’s their ‘Green economy.’ The Cochabamba path, by contrast, is to recognize the rights of the non-human parts of nature – to exist, reproduce, and retain their interrelationships.”

The Cochabamba alternative, which rejects the capitalist framework, is easy to explain in Canada, said Judy Rebick, founding publisher of Rabble.ca. “This alternative says that there are no market solutions. That’s already understood with regard to social problems, and it applies to nature as well.”

Many speakers expressed alarm regarding the Canadian government’s open hostility to defense of the environment. “We have become the pariahs of the planet,” said Dorval Brunelle, a professor at the Université du Québec à Montréal (UQAM).

“Canada is among the leaders in killing Kyoto,” the world treaty limiting carbon emissions, commented Council of Canadians chairperson Maude Barlow. “Under Harper, Canada is an eco-outlaw,” she added, expressing “special thanks to Bolivia” for offering an alternative.

“Bolivia must not stand alone,” Polaris Institute director Tony Clarke said. “Civil society must unite with the Cochabamba platform.” Governmental “negotiations on climate change will go nowhere unless there is a counterweight,” he added.

Amir Khadir, Quebec Solidaire co-spokesperson and member of the National Assembly, noted the absence of political will on this issue in our society. “To get out of our dead end we must look at Latin America, where social movements, unions, indigenous peoples, and farmers have joined a synthesis.”

The disastrous effects of Canada’s tar sands oilfields was analyzed by several speakers. Ben Powless of the Indigenous Environmental Network emphasized their impact on Native peoples, noting that the tar sands “poison Athabaska water resources and destroy Indigenous people’s food sources.” Oil extraction “violates the treaties with Indigenous peoples that we are all part of as Canadians.” Any environmental movement in this country “has to take seriously the challenge of colonialism in this country.”

Responding to Powless, Amir Khadir described Canada as “a colonial enterprise.” Canada’s notoriously pro-corporate mining legislation is “a colonialist law, copied from South Africa,” he said. “Canada is a mining-based state [un minéralo-état] just as Saudi Arabia is a monarchy based on oil.” The Quebec government has been Ottawa’s “best pupil” in applying these policies and now has set its sights on ravaging Quebec’s north, Khadir said. He hailed the resistance of the Cree peoples in the northlands and of Natives living near Oka: “The indigenous peoples are winning respect for their rights.”

Khadir also greeted the progress achieved in resisting development of shale gas in Quebec. Now in vogue globally as a new source of hydrocarbons, shale gas extraction depends on fracturing underground rock layers by forcible injection of fluids (“fracking”). It is widely feared for side-effects that include poisoned water and massive methane release.

“Within six months, in communities along the St. Lawrence river, 15 resistance networks arose, quite outside the ecological movement. They brought these big development plans to a halt,” Khadir said.

Kim Cornelissen, vice-president of the Quebec Association against Pollution, noted that under Canada’s mining laws, Quebec municipalities have no legal power to restrain shale gas development. They were undeterred. “Many adopted resolutions against shale gas development, even though they had no authority to do so.” This was effective, she said. “There is a difference between what is legal and what is politically effective.”

A panel on food and water issues focused on the contributions of working farmers to ecological survival. Véronique Côté of the Union Paysanne (Farmers’ Union), Quebec affiliate of La Via Campesina, described how small-scale farming operations preserve and improve water supply. Pat Mooney of EDC Group, a research institute, explained that independent farmers represent the future of the world’s food supply. “The world’s four giant livestock corporations work with only 25 breeds of 5 species. The farmers raise 8,000 unique breeds of 40 species,” he said.

Michel Fortin, a CSN union leader with long experience in the Abitibi-Bowater pulp and paper plant in Clermont, Quebec, described how its workers, faced with demands for concessions, went on the offensive on environmental issues. They achieved many gains, including worker involvement in environmental decisions, an 85% reduction in waste, and the transformation of the Malbaie river – formerly poisoned by plant operations – into a first-rate site for salmon fishing.

Workers and the Environment

Nick De Carlo, the Canadian Auto Workers’ national representative for the environment, recalled the slogan, “System change, not climate change,” voiced in the conference’s first session. “I agree,” said De Carlo, “but change to what, and how? The issues we are raising challenge to capitalism itself, and the changes will be carried out by workers. So we must build the workers’ movement.”

De Carlo emphasized that he was not speaking only of the workers’ movement in the limited sense of salaried workers organized in unions. “The social movement must be something new.” It must aim for a reorganized, locally controlled economy. “Everything that the environment needs is also needed by workers and their unions,” he said.

Addressing the same challenge, Khadir pointed to “a true dilemma.” With regard to the ecological challenge, “Most working people are sympathetic to world solutions, but not if this puts their jobs in jeopardy. Ecologists speak of great principles, and people answer, ‘But how are we to live?’”

To encompass working-class struggles, “we must meet this concern,” Khadir said. “The new society will go past socialism – because socialism, like capitalism, is productivist – but it must also assure employment.”

Remarks by John Cartwright, president of the Toronto and York Region Labour Council, illustrated this point. Toronto unions campaigned with success for a civic initiative to retrofit homes for energy savings. “It was a great success,” he said. “More jobs, cost savings, and reductions in energy use.” A similar success was achieved in diverting organic matter and recyclables from the waste stream, as an alternative to hazardous dumping of Toronto trash into an abandoned open-pit mine in Ontario. Cartwright also reported on the Labour Council’s “good jobs” campaign. “Our second conference brought together 600 people, nearly half of them people of colour – it was the first such environmental conference in our history.”

In the final conference session, several young activists criticized it for a lack of inclusivity. It was noted that only one of thirty panellists was under thirty years old. With the exception of one “horizontally”-conceived session, discussions were in a traditional panel format that were thought to have restricted input from other participants.

Speaking for the conference organizers, Cy Gonick, publisher of Canadian Dimension, acknowledged that “we have to be as inclusive as we can. The Conference tried, and was not entirely successful. We know we need to do better and will work with everyone who feels somewhat excluded.”

Elizabeth Peredo Beltrán of the Solón Foundation in La Paz – a significant force in Bolivia’s efforts for climate justice – spoke of unity in a broader framework: the need to bring together social and environmental struggles. “Social movements are drawn to influencing governmental negotiations,” she said, “but this must not take us away for the struggle for water and other specific goals. We must draw on the knowledge and cultural values of indigenous people, young people, and women. People are trapped by misinformation, but scientists know the truth. We must insist on the truth.”

South African author and activist Patrick Bond also stressed the need to unite “saving the environment with saving the poor.” The approach – the core concept of the global movement for climate justice – will be at the heart of a people’s summit in Durban, South Africa, in December 2011, where yet another session of governmental negotiations on climate justice is to take place.

Andrea Harden-Donahue, energy and climate justice campaigner for the Council of Canadians, stressed that “the UN climate talks are not going to cut it.” Pressure on the negotiators is good, but “hope is not in Harper and not in the UN but in building alliances for local action,” she said.

It is important to recognize that the climate justice movement already exists, Judy Rebick said, in dozens of vigorous local struggles, especially the huge fight against mining. “We need to get in touch with those doing the work and provide a platform where they can share experiences.”

With regard to the road forward, the closing session was marked by considerable agreement, expressed in part by the following four proposals.

But the main achievement lay in the simple fact of the conference itself and the richness of its discussions. “This is the first chance in twenty years for such a political discussion embracing forces from both Quebec and [English] Canada,” commented conference organizer Roger Rashi. In addition, the conference expressed new energy and increased confidence in building the climate justice movement.

Peredo caught the spirit of the conference in stressing that “climate justice is a matter of life and death” for our species. “We need huge mobilizations at the local level.”

Dale Marshall, climate change analyst for the David Suzuki Foundation, pointed to a contradiction in our conduct. “We say that the situation is urgent, but we do not act as if its urgent. We need to express urgency in our collective actions.” The question of how to give expression to this urgency must now be resolved through the experience of the broader movement for ecological and climate justice. •

See also Some Reflections on the Montreal Conference by Matthew Brett.