We said on 18 January in our article “The Arab Spring of Democracy” that all Arab states share the same characteristics, and from this deduction that the same conditions will produce the same results. On 25 January, following the Tunisian revolution, the Egyptian uprising began. Since then, popular uprisings are spreading like wildfire in the Arab world. It is the Arab Spring of democracy. It is a new era full of hope and aspirations that will change the balance of forces in the Middle East, and maybe the world. No Arab country will be spared. 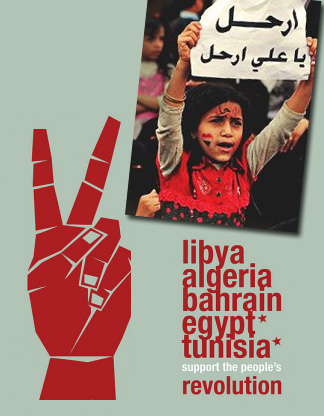 The Muammar Gaddafi regime does not differ in essence – while it is worse in practice and barbarism – from any other dictatorial Arab regime, such as those of Tunisia’s Ben Ali or Egypt’s Hosni Mubarak, which consist in a family that rules through a police state, and an increasing integration of the local economy into global financial and market capitalism and associated policies. It is singular in its use of the Green Book to prevent, by law, any independent thinking and consequently any civil society groups, equating them to treason punishable by death. Gaddafi’s last attempt to suppress dissent was his attempt to block the possibility of an independently elected bar of lawyers, alongside his attempt to put the local police under the control of the military regiments of his sons.

The general Libyan youth uprising, echoing Tunisia and Egypt, and the rapid defection of his ministers and ambassadors, express the hollowness of Gaddafi’s regime. Because he has no popular support anymore, he decided to use ruthless force against the youth uprising, thinking that he risks nothing from the West after having accorded licenses for extracting oil to their companies, his agreements on fighting terrorism, the arms contracts, the expertise in military and police methods given to him by the U.S., Britain and other countries, and the lobbies he bought to strengthen his rule and ameliorate his image in the West and Africa.

If there had not been an uprising, the West wouldn’t be against Gaddafi. This was well expressed in the hesitation and the difference in position between the U.S. and France and other countries toward whether to support the Libyan revolution. Since his reconciliation with the U.S. began by abandoning the nuclear option, Gaddafi struck a calm cooperation with Ben Ali and Mubarak, imitating them in their cooperation with the West, and in their war against terrorism aligned with the West. In oil, armaments, services and strategic Arab questions, Gaddafi satisfied all Western countries and Israel, using this relation to silence criticism of his dictatorship and to reinforce his grip on power.

We consider the West’s military intervention as an attempt to abort, deform and control the general uprisings in the Arab world. Following Mubarak’s ouster, the Arab regimes, the West and the Arab intellectuals know well that the time of suppressing the Arab youth by force is gone, and that force will not stop the fire from spreading. While the Arab democratic forces supported the Libyan revolution against Gaddafi and demanded to aid it through the Arab League, the West and the Arab Gulf regimes preferred – for different reasons and to different degrees – that change comes from Gaddafi’s inner circle via Western military intervention, to discredit both Gaddafi and the revolution.

It is the Arabs and the Arab League that wanted to aid the Libyan revolution. The West aborted the Arab League’s attempt by taking the responsibility of the intervention and giving it to NATO. The Libyan revolution refused Western intervention firmly in the beginning, and continues to refuse any presence of foreign troops, hoping that the aid comes from Arabs and progressives around the world. We should recognize now that the U.S. media’s manipulations, the Gaddafi supporters bought by money to ameliorate his image, the failure of the Arab League to act independently, the failure and the hesitations of progressives to defend the democratic Libyan youth, enabled Gaddafi to use force and advance until Benghazi. The content of UN Security Council Resolution 1973 expresses well this situation.

It is true that an intervention based on UNSC Resolution 1973 is different from the intervention in Iraq, but it doesn’t change that it is a Western military intervention that aims not to help the revolution, but rather to abort it and guarantee Western interests. It became a war against Libya to impose Western interests that the revolution cannot oppose without risking elimination. But we should realize that the interests of the West are different and conflicted too. This finds reflection in the ambiguity of UNSC Resolution 1973, which does not prevent Gaddafi from attacking cities or permit direct action to get rid of him, nor does it really protect the civilian population, nor aid the youth revolution. It is as if it gives permission to destroy Libyan armaments and infrastructure and wait that they be bought again or restored by Gaddafi or whoever will replace him.

The Hypocrisy of Humanitarian Intervention

The NATO military intervention in Libya is to guarantee its economic and strategic interests, but above all to prevent profound cooperation between Tunisia, Libya and Egypt. Such cooperation between three democratic adjacent Arab countries would constitute an efficient means to struggle against imperialist strategy in the Arab world. The Gulf Arab regimes, meanwhile, hate Gaddafi as he spent his 42 years in power conspiring against and attacking them.

The Western leftist discussions of Resolution 1973 express the same thing as their governments. They all forget that the circumstances of the resolution consist in a democratic uprising that is being suppressed by force. The majority appealed to their governments to interfere, instead of providing political help to the youth through recognition of – and aid to – the Transitional National Council (TNC), France being the exception that recognized the TNC rapidly for its own reasons. Some omitted any possibility of aiding the revolution because they consider Gaddafi’s regime a socialist regime that therefore has the right to suppress the revolution even if it is composed of all the people. Some refuse U.S. and NATO intervention and reduce the Arab democratic uprising to a CIA and MI6 conspiracy. Some condemned the Western intervention without supporting the democratic uprising, which equals allowing Gaddafi to suppress the uprising by force.

All humanitarian intervention discussions, whether for or against, are based on hypocrisy: they avoid calling a cat a cat: i.e., there is a democratic popular Arab uprising that should be supported. Instead of recognizing this, they discuss military intervention as if it is an ideological quarrel that is taking place in the West. To avoid taking a position, some in the left propagated Gaddafi and U.S. propaganda to discredit the uprising. In discrediting the uprising, they reinforced Western attempts to control it by imposing its men and conditions. Happily, there is a minority in Europe as well as in the U.S. that stand against the intervention but with the uprising, putting themselves in agreement with the overwhelming majority of Arab progressive intellectuals and currents, and saving the honour of the left.

Four Conflicts In One

Western manoeuvres and military intervention did harm to Libya, to the Libyan people and to its revolution. But it cannot stop the revolution from achieving an independent democratic Libya in cooperation with its neighbours. The task may be harder now, but it continues to be achievable.

The Western strategy of divide and conquer began to crumble. Failing to see this is the same ignorance and ethnocentrism of the West when it touches Arab questions, the most well known of which is the Palestinian question in 1948 and after. Some in the West continue to think that Arabs cannot have a democratic revolution without Western leadership. Foreign powers do not control the Arab uprisings that have marked the opening weeks of 2011. Indeed, their agendas are the first victims of these uprisings.

The war waged by Gaddafi against the Libyan people, denying them human rights and democracy, has given birth to four conflicts. The first is a war waged by Gaddafi against the people. The second is the one that began with the Western military intervention against Libya. This conflict cannot hide the third, which is competition concerning the Libyan future among the aggressors themselves. This is the reason the aid to the revolt became an aggression on Libya by the allies, opening the way to the fourth conflict. Now the Libyan revolution should struggle not only against Gaddafi but also against the forces trying to occupy Libya.

Despite the complication of the situation, progressives and peace loving people cannot but support the Libyan revolution, which would bring democracy and independence to Libya and back and reinforce the Tunisian and Egyptian revolutions. The Arab youth have decided to take their future, and the future of their respective countries, into their hands by building a civil democratic state to have liberty, justice and dignity. It may take years, but it is now certain and inevitable. It is the failure of the globalized model of a family governing through a police state and comprador elites. Libya is but one variation of this model. •

Hana Al Bayaty is an author and political activist.

Ian Douglas is coordinator of the International Initiative to Prosecute U.S. Genocide in Iraq.

Mohammad Ammar is recently returned from Libya, and archived and participated in the Egyptian Revolution.