The Egyptian Uprising and Workers’ Grievances

It is too early to give an explanation for the Egyptian revolt. Much still needs to be understood about the character and the driving forces behind this sustained mass mobilization, as well as its dynamic and development. Some initial thoughts could still be entertained, however, especially with regards to the nature of the protestors’ demands. Though the revolt was caused by increasing economic hardship and insecurity, as well as by mounting political repression and authoritarianism, the demands of its youth organizers were solely focused on political democracy. The economic and social justice campaigns that in part laid the groundwork for this revolt over the past few years (with 3,000 workers protests and strikes since 2004)[1] have as yet to take centre stage politically in this mass upheaval. Why this is so is an important part of trying to determine what happened in these last weeks of rupture in Egypt. 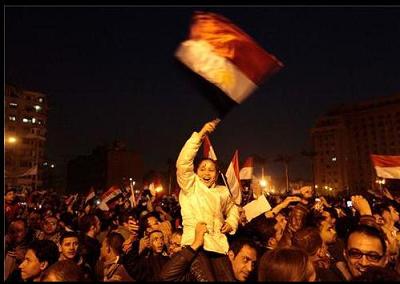 What is particularly striking about the Egyptian uprising of the past 18 days is that it has been mostly led by middle-class youth activists, galvanizing Egyptians from many walks of life including workers, professionals, and the poor. As the protests continued and Hosni Mubarak stubbornly refused to leave, the 6th of April group (as part of the newly formed Youth Coalition of the Anger Revolt), came up with a clear set of demands:

These radical political demands of the protestors in the last three weeks, if realized, would significantly improve the lives of every Egyptian. What they don’t address, however, is workers’ economic aspirations. And this is why it’s important to remember that the revolt was preceded by a decade of workers mobilizations and protests in different sectors and industries. In fact, since 2004 there has been a direct relation between the recent uprising and the working-class movement: the 6th of April movement itself that called for the 25th of January Day of Anger (Twitter hash-tag: #Jan25). In order to understand the political primacy of democratic demands in the uprising and the nature of the revolt generally, it is necessary to explore this link.

The middle-class militant youth movement of 6th of April is still a bit of a mystery. It arose as a movement of solidarity with striking textile workers in Mahalla (an industrial town two and a half hours north of Cairo). The fact that Mahalla workers had been striking since 2006 and were able to gain concessions from the state in 2006 and 2007 drew the attention of Egyptian liberal movements and young activists. Following the 2006 Mahalla strike, some 300,000 workers in total protested in various industries, making for the most significant labour force struggles since the 1940s.[3] Mahalla became a symbol of revolt and challenge to the regime, and workers’ demands became more radical. First they called for increases in payments. Then they called for the institution of a minimum wage for all Egyptians (not just Mahalla workers) and the creation of an independent labour union, a demand that had not been put forward since the incorporation of labour unions into the state apparatus back in the 1960s.[4]

On April 6, 2008, militant rank and file workers had called for a strike in the state-owned factory Misr Weaving and Spinning Company. On hearing about the planned strike, a group of young Egyptian activists called for a general strike and civil disobedience in all of Egypt on the 6th of April in support of the Mahalla textile workers. It is not clear whether the idea of calling for a general strike was originally that of the workers or that of political activists in Cairo. What is clear, based on my interviews with strike leaders, is that Mahalla workers called for a strike inside the factory walls on the 6th of April but that as a result of intimidation and oppression some strike leaders disowned the strike. Some of the workers in Mahalla were contacted by political activists in Cairo, there was, however, no real coordination between the Mahalla strikers and the Cairo activists.

But the 6th of April strike never happened. As a result of state oppression, the call of the young activists for a general strike in Egypt failed and so did the strike in Mahalla. The strike was aborted. But the presence of heavy security forces in the city of Mahalla, and their aggressive confrontational attitude toward Mahalla residents on the streets, did spark a general uprising in the city. One person was shot dead by the security forces and many others were injured.  Following the events of 6th of April, most of the leading workers in Mahalla were either punished by being transferred to work in remote cities, or transferred to other jobs in the factory. In both cases their salaries were severely cut. Mahalla workers were also not able to form an independent union.[5] As for the young middle class activists that later became the 6th of April Movement, the state also used its routine techniques of imprisonment and intimidation to repress them. The oppressive state response to the planned strike of 6th of April managed to instill fear in the hearts of workers in Mahalla and their youth supporters. However, this fear was short-lived.

On the 25th of January 2011, the 6th of April group called for a Day of Anger. This time around, Egyptians responded and joined the youth activists in their hundreds of thousands. The scenes coming from Egypt in the last 18 days are testimony to peoples’ ability to overcome fear through collective action and organization. Against state intimidation and killings, popular self-organization was resilient and steadfast. For the youth leaders, the political demands of democracy and ending authoritarian rule were primary as the declaration of the Youth Coalition of the Anger Revolt suggests.

Workers also participated as protesters in the January 25 Day of Anger, coming out to the streets and demanding the end of the regime. In the last three days of the revolt workers protests were taken to another level when they halted production and held strikes at their work places in massive numbers. Workers mobilized in numerous locations demanding better pay and job stability. The protesters included government employees, public sector and private sector industrial workers, such as textile, railway, Suez Canal, mill, and petrol workers, as well as lawyers, and nurses. In Mahalla hundreds of thousands of workers and residents marched and changed the name of the main square (Al-Shon) to “Revolution Square.”[6]

These mobilizations gave a serious push to the protests movement, disrupting work and pushing for civil disobedience on a national level. Significantly, a great number of workers continue to mobilize and strike at their work places even after the resignation of Mubarak and takeover by the Army. The question now is whether workers’ mobilizations during the last decade and during the revolution could turn into a more centrally organized powerful working class movement that can be a full participant in the process of constructing the future of Egypt.

So far workers organizations have not come up with a unified call that represents workers’ national and social demands. The most radical demands that directly addressed workers’ grievances came from a coalition of left parties and committees, which on the 7th of February came up with a declaration that requested urgent moves to lessen people’s suffering: institute a minimum wage; provide unemployment leaves; provide social support as well as food subsidies; build a developmental strategy that enhances the productive sectors of agriculture and industry; redistribute profits more equitably; and, finally, institute a system of progressive taxation.[7]

These demands are yet to be adopted by the Youth Coalition of the Anger Revolt who have to date failed to incorporate longstanding workers’ grievances. What pushed workers to strike in the last several years in Egypt has been increasing economic hardship and deprivation. For workers, ending the regime of Mubarak is not just about instituting democracy. It also means reversing the neoliberal track which has impoverished them and plagued ordinary life with severe insecurity. For this kind of change to take place workers movements have to be at the forefront of future political mobilizations. This may also be the best way to ensure that the recent departure of Mubarak, as momentous and hugely significant it is, doesn’t leave behind Mubarakism: a military dictatorship or government that pursues the same neoliberal political and economic policies that pushed Egyptians to the streets in the first place. •

3.
Information on the Mahalla strikes has been collected from a number of newspapers and blogs. See Joel Benin and Hossam el-Hamalawy (2007), Gada Rajaey (2008) and Mostafa Basuni and Omar Said (2007).

4.
This is based on a leaflet that I collected when I was in Mahalla (my translation).

Ali, Khalid, 2006. Workers and the Social Resistance, The First Edition. A report published by “Markiz Hisham Mubarak,” an organization of civil rights lawyers. (In Arabic.)

Ali, Khalid, 2007. Workers and the Social Resistance, The Second Edition. A report published by “Markiz Hisham Mubarak,” an organization of civil rights lawyers. (In Arabic.)

Basuni, Mostafa, and Said, Omar, 2007. Signs of Strikes in The Sky of Egypt: A New Labor Movement, 2007. Published by the Socialist Study Center. (In Arabic.)

Rajaey, Gada, 2008. A Report on the Conditions of the Textile, Cotton and Ready Clothes Workers. Economic and Social Rights Reports, N. 63. Published by The Center of Land and Human Rights. (In Arabic.)

Nada Matta is a PhD student at New York University.