Crises expose the system’s irrationalities and wasteful resource allocations. For example, Madoff and his many, smaller imitators reveal the tips of corruption icebergs. More important, the crisis-induced fiscal emergencies looming in most of the 50 states demonstrate several absurdities in our economic system.

The Center on Budget and Policy Priorities (CBPP) in Washington, DC monitors and calculates the gap between the fifty states’ tax revenues and expenditures. The following recent CBPP chart compares the total state budget shortfalls in both the last recession and the current one. Today’s record shortfalls measure how many billions states will need to raise in additional taxes or cut their expenditures (or combinations of both) in this and coming years. 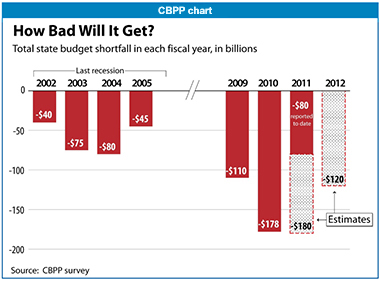 At a time of crisis, while the federal government injects unprecedented stimulus (tax cuts and expenditure increases) into the U.S. economy, the fifty states are doing the opposite. State tax hikes and expenditure reductions will continue to undermine or slow any recovery. Moreover, the American Recovery and Reinvestment Act (Obama’s stimulus program) has offset only modest portions of the states’ fiscal budget shortfalls for 2009 and 2010. The CBPP estimates that the worst of the budget crisis will hit states in 2011 and 2012. The carnage will total a huge net $260-billion even after allowing for the federal stimulus funds still available then to flow to states. Another way of putting this is to note that the just released third quarter (Q3) of 2009 Gross Domestic Product (GDP) number was lower than it would have been without the depressing effect of the fifty states’ tax hikes and expenditure cuts. We saw states and municipalities spend 1.1% less in Q3 than they had in Q2, despite rising need.

State taxes are generally more regressive than the federal income tax and so fall relatively harder on middle and lower income groups. Likewise, state expenditures tend more immediately to impact those same groups since they include major supports for public education and myriad social programs. The negative economic effect of the states’ fiscal crises will heavily impact the mass of U.S. citizens already angered by high unemployment and foreclosure rates as they observe trillions of bailout dollars flowing to banks and corporations ‘too big to fail.’

The CBPP also studied what kinds of budget decisions the states have already made because of the crisis. Key findings include the following:

Since the worst of the states’ budget shortfalls lies ahead, we can expect all of these numbers to deteriorate further.

These state actions not only undercut the federal government’s short-term stimulus goals; they also impose long-term costs on the economy in the diminished health and education of the U.S. workforce. Just when the mass of Americans need more help and support from their state governments, our economic system provides them with less. This raises the human and fiscal costs of the crisis.

If the states represent a fiscal train wreck, then the nation’s cities and towns represent another train not far behind and hurtling toward the wreck. The basic revenue for U.S. cities and towns comes from property taxes on land, homes, stores, factories, offices, and automobiles. As the prices of most of those properties fall, eventually the local property tax revenues from them also fall. Reassessing those property values usually takes a few years. Thus, the likely drop in tax revenues for cities and towns will only hit over the next few years. Their fiscal distress will then pressure them to raise tax rates, cut expenditures, or both. Doing so will counteract what the federal government is trying to do for the economy thereby worsening what the states are already doing.

The depth and duration of this crisis has thus only begun to bite deeply into the economy. Its negative social consequences, in the short and long runs, are rising fast. Recent GDP numbers point to the ability of torrents of deficit spending (and a fall in the U.S. dollar’s exchange rate with other major currencies) temporarily to lift the total volume of sales. However, the much touted GDP numbers for the second half of 2009 do not represent beneficial economic change for the mass of citizens.

For those who are willing to look beyond the usual economic blinders, here’s an old suggestion that only seems new because of the effective ban put on public discussion for so long. At the present time, the vast majority of U.S. states and municipalities exempt intangible property from property taxes. That is, stocks and bonds are kinds of property not subject to the taxes on other kinds of property (land, houses, etc.). If we imposed a very low rate of property tax on intangible property, it would cover the present and anticipated fiscal shortfalls of U.S. cities, towns, and states. Moreover, an intangible property tax would fall on those most able to pay, those who fared best since the 1970s as the gap between rich and poor widened sharply. If coordinated across all states and cities (perhaps levied and collected by Washington and then returned to states and municipalities), intangible property owners would have no incentive to move it from one place to another.

Rick Wolff is a Professor Emeritus at the University of Massachusetts in Amherst and also a Visiting Professor at the Graduate Program in International Affairs of the New School University in New York. He is the author of New Departures in Marxian Theory (Routledge, 2006) among many other publications.