Zionist Claims of Solidarity with the Iranian Protesters are Absurd

On October 27, the Canada-Israel Committee (CIC) held a conference titled “Democracy in Action: The Protests in Iran” in Ottawa. The purpose, according to the CIC website, was to “mobilize political action against the human rights abuses of the Iranian regime and its nuclear agenda.” To meet this goal the conference showcased a lineup of Israeli and Zionist politicians, legal figures, advocates, and military and diplomatic experts, including:
Ambassador Miriam Ziv (former Israeli Vice-Consul in Toronto), Irwin Cotler (MP and lawyer), Kenneth Timmerman (published a thriller on Iran, radical Islam, and the bomb, called Honor Killing), Mark Dubowitz (leads the Iran Energy Project, an initiative focused on researching Iran’s energy vulnerabilities and formulating policies to prohibit sales of refined petroleum to Iran), Noam Katz (Israeli Minister for Public Diplomacy in Washington, D.C.), and the CEO of the Canada-Israel Committee, Shimon Fogel.

To balance the heavy dose of Canadian and Israeli political, diplomatic, and military experts, the CIC lineup has two Iranians: so-called Iranian-Canadian “insider” Nazanin Afshin-Jam, singer, actor, former Miss World Canada, and President and co-founder of Stop Child Executions, and lawyer Sayeh Hassan. While the author of this article disagrees with the pro-monarchist, pro-Israeli, and deeply nationalist reading of the situation in Iran by Afshin-Jam and Hassan, it should be recognized that such sentiments do exist within the Iranian diaspora community. However, claiming that the political stances of these two individuals somehow represents Iranians in the diaspora is a stretch, and that they reflect the organized Iranian voices within Iran is simply untrue.

Hypocrisy of the Canada-Israel Committee

Putting aside the wide-ranging disagreements within the Iranian community, it is nevertheless important to understand the political uses of such conferences by Zionist and pro-Israeli organizations. This conference is part of a more general pattern of behaviour by Zionist and pro-Israeli ideologues who first placed their campaign for foreign military or political intervention in, and economic starvation of Iran under the umbrella of “concern over Iran’s nuclear intentions.” Yet, with increasing political tensions within Iran and mass protests faced with brutal repression and armed government-funded vigilantes, it became useful for Zionist groups to place their campaign of foreign intervention under the platform of “solidarity with the Iranian protesters.” The mass protests are welcomed by such organizations as an opportunity for putting increased pressure on the Iranian Regime to reconsider its geo-political interests, even if this would come at the cost of continued criminal activity against its own people.

Indeed, the CIC’s seeming support of Iranian resistance against oppression and condemnation of the Islamic Republic’s dismal human rights record is actually rooted in its support for Israel’s continued territorial and political domination over the Palestinian population. Not only are Zionist organizations such as the Canada-Israel Committee actively working in defence of the political and legal violations of the state of Israel, refusing to condemn its classes of citizenship, decades-long military occupation of the West Bank, its almost 2.5 year brutal siege of the Gaza Strip and blatant disregard for international law, they are also dedicating massive human and financial resources toward stifling freedom of speech around the Zionist-Palestinian conflict at academic conferences and on university campuses.

By ardently excusing Israeli political and military violations the CIC seems to argue that Iranians have the right to resist oppression against a brutal regime, whereas Palestinians do not. And statements of solidarity from such a morally bankrupt institution which serves as an advocate of the State of Israel, excusing its long list of criminal activity, are superfluous, empty, and insult the integrity of the decades-long struggle of the Iranian people.

Placing the Iranian Struggle Alongside Other Movements Against Oppression

Previous articles have criticized the failure of many leftists, anti-racist solidarity activists, and people of conscience to render an accurate reading of the political situation in Iran after the June 2009 elections. Concerns over military or political intervention in Iran by regional and global powers prompted some leftists to speak in defence of the Islamic Regime, even as photos, videos, and accounts of arrests, beatings, and the killing of unarmed protesters were pouring in from Iranians on the ground. The position of these leftists completely neglected, or held an apologetic view of, the continuing brutal record of the Islamic Republic in silencing artists, writers, social justice advocates, workers unions, public figures, feminist activists, students, civil society representatives, and others who dare to dissent.

The inability to look beyond what can often become a narrow anti-imperialist lens led some anti-racist, anti-oppression and anti-Zionist intellectuals and activists down a problematic path where they abandoned the calls of the Iranian people for freedom. These positions must be reversed for solidarity activists to maintain consistent politics. State oppression, corrupt elections, extra-judicial killings, and the brutal repression of unarmed protesters calling for social freedom, freedom of political prisoners, and gender equality is condemnable and must be hotly resisted, everywhere. 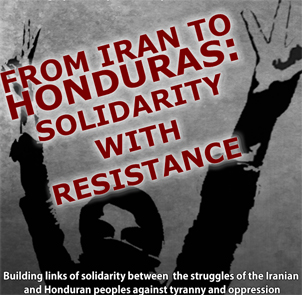 To achieve this, initiatives such as the panel on October 25 titled “From Iran to Honduras: Solidarity with Resistance” at the University of Toronto are a good example to follow. Seeking to start a discussion to situate the Iranian struggle alongside other movements against oppression and tyranny, this panel of academics, solidarity activists and young scholars drew links with the mass protests in Honduras against the military coup ousting of left-leaning President Manuel Zelaya. Perhaps most important is that this panel presented a sober account of the post-election protests and other continuing anti-oppression movements in Iran, and placed it within a historical, social, and geo-political context, without resorting to the CIC’s Orwellian discourses of weapons of mass destruction programs, “Radical Islam” and terrorism.

Going forward, activists and people of conscience must build on such initiatives, and respond effectively and responsibly to the calls of the Iranian people. •

Shadi Chaleshtoori is a student at York University. Shadi has worked with numerous Palestinian civil society organizations located in Gaza City, the West Bank and inside Israel.