Complicit, Complacent or Committed? Proposals to Build Pension Security for All Workers

Last summer, Buzz Hargrove, the soon to be former President of the Canadian Auto Workers (CAW), insisted – along with General Motors (GM) executives – that pension fears were unwarranted. Asked about the possibility of a worst case scenario that included GM pensions being reduced, Hargrove responded that this would be “so remote a possibility it’s not worth speculating on” (Toronto Star, August 8, 2008). 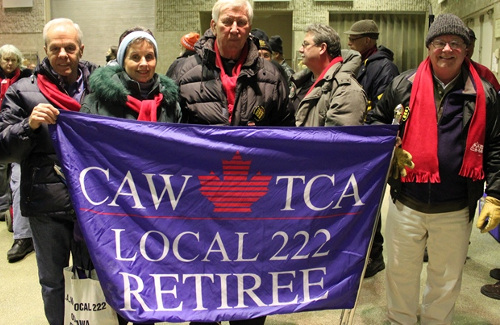 Fast forward to April, 2009 and Ontario Premier McGuinty’s remark, that the province’s pension safety net isn’t even close to being large enough to cover the auto workers if General Motors went bankrupt. The new President of the CAW, Ken Lewenza, responded with furious indignation: “to suggest that retirees will bear the brunt of something they have no control over is just unconscionable.”

Before going into who bears responsibility for doing little or nothing while GM put the pensions of GM retirees and workers at risk, some background in defined benefit pension plans and the role of government may be helpful.

According to RBC Dexia, there are 351 defined benefit pension plans in Canada with 391,000 members. Defined Benefit (DB) plans guarantee income levels on retirement. The majority of workers with DB plans are members of unions with a large proportion being public sector workers. Less than 35% of Ontario workers have private pension plans, both defined benefit and defined contribution plans.

Like the United States and the United Kingdom but unlike any other Canadian province, the Ontario government oversees, through the Financial Services Commission of Ontario (FSCO), a Pension Benefits Guarantee Fund (PBGF). The PBGF is funded by premiums paid by employers who maintain defined benefit plans. The Fund ensures that a minimum guaranteed level of benefits will be paid to Ontario plan members and pensioners when a plan winds up with insufficient funds and the employer is unable to bring the fund up to full funding. Usually this occurs after restructuring through the Companies Creditors Arrangement Act (CCAA) fails and the company liquidates assets and goes out of business. If, in these circumstances, the plan is unable to pay the full benefits promised, the PBGF tops up the shortfall but only to a limited extent: only $1000/month is fully covered.

However, the Pension Benefits Act which gives the FSCO the authority to administer the Fund contains language in Section 82(4)
that provides

The key word in this passage is “may.” Anyone who has ever taken a basic Union Stewards course will recognize this as a ‘weasel word.’ The legislation effectively allows the government to refuse to lend money to the Fund in the event that it finds such a loan to be either a financial or political risk to the governing party. In this case, the Ontario government is declaring it won’t meet its moral commitment to GM retirees both because of the cost and the precedent as other major bankruptcies occur.

The PBGF has been in place since 1980 without any substantial amendment, despite developments that might affect its operation, such as rising levels of claims against the PBGF; the eroding effects of inflation on the value of top-up payments (if the $1,000/month guarantee were updated just for inflation, the guarantee would now be for $2,500/month rather than $1,000); the requirement from time to time for additional funding met by loans from the provincial government or special contribution levies; and the exemption of several categories of pension plans such as defined contribution plans from participation.

Both Federal and Provincial pension regulators require plans have enough assets to buy an annuity that would pay enough to pay the promised benefits. The increasingly low interest rates combined with the erosion of plan assets have forced companies with defined benefit plans to make extra contributions to the PBGF to offset any shortfall. In January 2009, Watson Wyatt Worldwide estimated that the ratio of a typical pension plan’s assets to its solvency liabilities dropped from 96% in January 2008 to 69% by the end of the year.

To understand how General Motors and the Ontario government got into this situation we go back to the spring of 1992 and the NDP government of Bob Rae. The recent media reports have referred to GM receiving an exemption from having to fully fund their pension plan in 1992 only tell part of the story. In the early 1990s, Ontario was in recession and employers were in trouble. Six large multinationals, the Canadian divisions of GM, Ford, Chrysler and IBM, Sears Canada and Stelco wanted the flexibility to trim their pension plan contributions. When the good times returned, they presumably would top up the plans.

Premier Rae granted them their wish. This meant their pension funds could ignore their solvency tests, that is, the assets didn’t necessarily have to cover their liabilities, assuming they were to be wound up at any point in time. In exchange, the companies made higher contributions to the PBGF. But the extra payments were insignificant compared with the tens of millions in savings from the effective contribution holiday. This argument recently put forward by some in the CAW, that the extra contributions made to the PBGF bailed out some of the smaller failed plans is weak. Plans of bankrupt firms with pension shortfalls could have been easily covered either through loans from the government (as in Telco’s case) or the right of the PGBF to place a lien against the assets of a liquidated company to recover any pension liabilities (Sec 86(1) of the Pension Benefits Act).

According to Thomas Walkom, in his book Rae Days, The Rise and Follies of the NDP, “In 1992 the government announced it planned to raise $2-billion from private-public sector pension funds to invest in high technology industry” (p. 107).

It isn’t clear whether GM and the other exempted corporations invested in this scheme in exchange for the full pension funding exemption. But the question that has to be asked is why the 1992 exemption continued after the rapid decline in the fortunes of GM since 2003? Why didn’t GM fully fund their plan in Canada as they did in the U.S. in 2003? The argument that they couldn’t afford to doesn’t wash. GM has a higher retiree to active ratio in the U.S. than they do in Canada.

Whatever arrangement the Rae government had with General Motors in the spring of 1992, it is a sure bet that Bob White and the CAW knew about it. Bob Rae wouldn’t have made such a deal with GM without advising or consulting the CAW. It was Bob White who was instrumental in luring Rae to provincial politics and using the resources and organizational skill of the union to help Rae to a victory in the 1982 Ontario NDP leadership race. Whether or not the CAW was originally cautious or even opposed to Rae’s proposal, they did not publically attack the NDP for the change.

To be fair the sentiment that was prevalent then and in some quarters today is that GM is too big to fail. And even without the change made in 1992, the GM Pension Fund could not have escaped the impact of its loss of market share and the recent financial collapse which reduced the value of its assets in the pension fund. But while now making the Rae government the scapegoat, it ignores the culpability of GM and the complacency of the CAW since 2003, by which time GM’s inevitable survival could no longer be taken for granted.

That General Motors is reportedly teetering on the brink of insolvency comes as no great surprise to anyone in the Auto Council of the CAW and certainly not former President Buzz Hargrove. Hargrove publicly warned that with the death of the Auto Pact in February 2001, the survival of one or more of the Detroit Three was at risk. Also, the CCAA restructuring of Stelco in 2003 should have been a wake up call to the CAW, corporations and especially the Ontario government.

The lesson Unions and workers need to take away from this is that there are no corporations “too big to fail.” Ensuring private and public pensions are fully protected and indexed to inflation needs to be not only a goal for unions but a priority that is imposed on both Federal and Provincial governments.

Moving beyond what happened in the past and who is responsible there are several ideas for building pensions that are worth considering;

1) Nationalize all private pension plans. Whenever we see a large business failure and the underwriting of pensions becomes public they are almost always underfunded, sometimes dramatically. It was workers who built GM into a profitable company. In exchange for their labour the Union negotiated decent wages and retirement benefits. The fact that their corporate masters failed to plan and adjust to changing markets and fulfill their end of the bargain should not impoverish their retired workers. Moreover, there are limits to winning pensions privately for select groups of workers, especially as competition intensifies and any particular company may not be around tomorrow. And when the company fund falls short, because others don’t have comparable plans, the workers affected are left isolated. The union is left defending what are perceived to be the elites (Detroit Three workers) from both in and outside of the union.

We need decent public plans that do not depend on the vagaries of the economy and corporate competition. Being dependent on the employer for our pension ties the interests of workers too closely to the companies at the expense of worker solidarity. Taking pension funds out of the hands of the corporations ensures past and future GM employees some level of security.

2) The Canada Pension Plan also needs to be radically changed. Unions should be allowed to negotiate higher employer contributions to CPP for its members. As well individual workers, entrepreneurs and others could voluntarily contribute more to their individual CPP account. The merits of this proposal would be:

Fighting for Decent and Secure Pensions

In conclusion, retired workers didn’t create the problem and neither did their unions who negotiated their well deserved pension plans. The Provincial government needs to end the exemption for not fully funding pension plans and follow the recommendations of the Arthurs Expert Commission on Pensions and require defined benefit plans to be funded to 105% and increase the minimum PBGF coverage from $1000 a month for workers to $2,500.

Workers and unions must take the lead in representing all workers in the fight for a decent and secure pension. With the shattering of the illusion that rising home prices or mutual funds will offer such future security, pressure must be put on representatives of all levels of government to be as concerned with establishing a truly universal, fair and secure public-led pension system as they are with bailing out banks and increasing tax breaks biased to the rich. That we are in the midst of an economic crisis is no reason to postpone political action and social mobilization of workers and unions in defence of their interests. Rather, it makes such action all the more essential if past victories of workers’ struggles are to be maintained and future ones built. •

Jim Reid is a union activist and a supporter of Workers for Union Renewal.