Another Left is Possible

It would be wrong to see last Thursday’s massively successful protest actions in France as distant and exotic, of no particular relevance to us here in Canada. With the economic meltdown heralding a new political era, and with most of the country’s Left and social movements still stunned and disoriented following their embrace of the misguided and failed Liberal-led coalition plan, the French experience is instructive and inspiring. 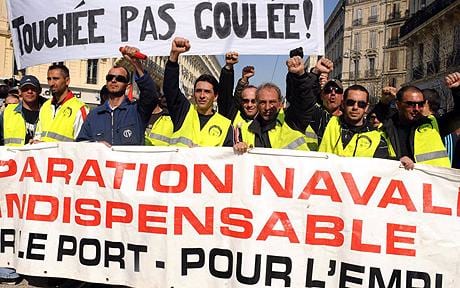 France has just gone through another day of mass strikes and protests against the hard-Right government of president Nicolas Sarkozy. The protest action is hugely popular in opinion polls and comes on the heels of another successful but smaller day of action on January 29, a victorious six-week general strike on the Caribbean island of Guadeloupe that spread to other overseas colonial territories and the proliferation of radical protest actions among students and in a number of workplaces – all in the context of growing job losses and a deepening financial and economic crisis.

‘France’s Thatcher’ on the defensive

Not long ago, Sarkozy was widely hailed in Anglo-American circles, from the Blairite “centre-Left” across to the Bushite and Harperite neo-conservative Right, as the French Thatcher – the man that would usher in the “normalization” of French society by at long last breaking resistance to growing inequality, job insecurity, privatization and cutbacks. And yet, a mere 18 months into his mandate the swaggering and obnoxious Sarkozy is now stumbling in the face of the resilience and scale of popular resistance.

Though still very far from being defeated, Sarkozy and the neoliberal project more generally are on the defensive in France, a country at the heart of the global capitalist and imperial order. This has not failed to raise a few eyebrows in other European and western capitals, where the fear is that developments in France will serve as an example for workers and young people in their own countries.

Further stoking these fears is the fact that Olivier Besancenot – the 34 year-old postal worker and spokesperson of the newly created New Anti-Capitalist Party (NPA) – has consolidated his position as by far the most popular opposition figure in the country. For several months now, polls have ranked him well ahead of the leader of the nominally social-democratic Socialist Party (PS) Martine Aubry – and even further ahead of the PS candidate in the 2007 presidential elections Ségolène Royal and centre-Right leader François Bayrou. Besancenot recently even earned the unusual distinction of being the only left-wing and working-class figure to be named to the Financial Times list of 50 people “who will frame the debate on the future of capitalism.”

As its name suggests, the NPA has an explicitly anti-capitalist profile and its program calls for a revolutionary transformation of the country’s political institutions and property relations. It is an activist party, with a growing base of more than 10,000 members across the country involved in local organizing efforts and broad activist campaigns and the internal work and debates of the NPA itself.

The party brings together former members of the largest surviving (and now “self-dissolved”) organization of the 1968-era far-Left (the “Trotskyist” LCR), a wide array of experienced and previously non-party-affiliated trade-union and social-movement activists, a new generation of radicalized students and youth and a significant layer of people of all ages for whom the party is their first political experience ever. It is quite easily – certainly within the industrialized world at any rate – the most dynamic and radical example of attempts at fashioning a left-wing alternative to the increasingly discredited policies and institutions of neoliberalism and capitalism.

This is all very heady stuff. So heady, in fact, that it is tempting to see these developments in France as distant and exotic, of no particular relevance to our own work and debates here in Canada. That would be unfortunate.

To be sure, there are important differences between the context and relationship of forces in the two countries. For one thing, today’s protest movements are at least in part an extension of those that have shaken France since late 1995; and the initiative to found the NPA was taken only after a long, complicated and occasionally rancorous debate between the various political and social-movement forces involved in these movements in one way or another. It will certainly take time and a significant upsurge of protest and resistance in Canada before these kinds of debates get any kind of traction beyond the margins of political life here.

Fundamentally, however, the strategic lay of the land in the two countries is not so dramatically different. Whatever the fate of Sarkozy’s cabinet in the face of the present protest movement or of Sarkozy himself in the 2012 presidential elections, the NPA are under no illusions that there will be a serious breakthrough for anti-capitalists in the short term. Even in France, the relationship of forces and rules of the institutional game are firmly stacked against such an outcome.

The NPA understand that they are just now entering a long period of rebuilding working-class and anti-systemic movements and of developing a new vision and strategy for enduring radical change. This is something the party’s program describes as “21st century socialism,” tipping its hat to the Bolivarian revolutionary process underway in Venezuela and other Latin American countries.

What are the broad lessons we can take away from the French experience?

For one thing, the protests and strikes, and the organizing that made them possible, show that resignation, panic and “everyone for themself” are not the only possible responses to the onset of economic hard times. While people will often respond in a conservative and individualist manner at the onset of a crisis, there comes a time when they realize that systemic issues are at play and that only broad, collective action and political alternatives will do.

For another, the party and trade-union organizations of the traditional Left are too weakened and compromised by years of adaptation to neoliberalism and dependence on positions in parliament and the state to respond to the challenges thrown up by the hard-Right and the economic crisis. While rightly associated with a range of measures of socio-economic progress, the post-war mediations between the organized working classes, their party, trade-union and social-movement representation and the state itself were never ideal; but after 25 years of neoliberalism they have ceased even to be operative for some time now.

In France, repeated waves of mass protest and organizing over the past 13 years have failed to halt the traditional Left’s drift toward the Blairite “centre-Left.” As the Right and ruling elites toy with various ineffective solutions to the crisis, the forces of the “centre-Left” will be quick to latch on to the handful of “stimulus” and ersatz “Keynesian” measures that are thrown into the mix to artfully declare a major breach in the neoliberal fortress. So the crisis is just as likely to deepen the rightward trend of the traditional Left and “centre-Left” as it is to push these forces in a more radical and combative direction.

The new days of action in France provide further confirmation of this analysis. While they could not have occurred without trade-union unity at the top, this unity “from above” came about in response to pressure “from below” and simultaneously acts as a trammel on the further development of the current movement. The pressure “from below” has itself been the result of a surprising and noteworthy development – the confluence of a substantial segment of public opinion with radical sectors scattered across traditional and new trade-union groupings, local workplace and activist campaigns, the student and international-solidarity movements and the relatively small party-political organizations of the radical Left.

How a ‘Radical Left’ Can Get a Wide Hearing

And this brings us to the particular significance of the NPA. It is as much a product of this surprising confluence of forces as it is a vital ingredient in ensuring that the present unity and momentum are not lost in the face of hard-Right intransigence and “centre-Left” weakness and perfidy.

In other words, the debate on political strategy and organization now occupies centre stage; and the main lesson of the NPA’s undeniable success is that a radical-Left political project can both receive a sympathetic hearing and play this strategically essential unifying and galvanizing role, on condition that:

Finally, the protest movements in France and the birth of the NPA inaugurate a new chapter in the life of the international radical Left, especially when viewed in tandem with the developments of recent years in Latin America. The fact that the main figure associated with events in France was born in the mid-1970s also signals the emergence of a new generation of radicals.

We had a whiff of this trend during the wave of anti-globalization protests ushered in by the Battle of Seattle in 1999. But now it appears to be asserting itself much more forcefully, with a larger and more receptive audience than the one that existed just a short time ago. This, too, is a tremendously important and encouraging development. •

Nathan Rao attended the founding convention of the NPA in Paris earlier this year.

This article is reproduced from rabble.ca.

Nathan Rao is a longtime member of the Toronto Left who has been living in Paris since 2012. He can be reached at natrao[at]tuta[dot]io.