The Crisis Will Be Profound and Prolonged…

The Brazilian Landless Movement (Movimento dos Trabalhadores Rurais Sem Terra – MST) has been at the forefront of militant struggles against neoliberalism and capitalism in Latin America for many years now. They continue to be a key pole of militancy in the upsurge of socialism and renewal of the Left across the continent. They are now leading in discussions of how peasants and workers in Brazil and Latin America might respond to the financial crisis tearing across the world market. This is an important statement by João Pedro Stedile, one of the leaders of the MST. It comes in the midst of a right-wing offensive and governmental repression against the MST over the actions last week in the occupation of the Aracruz Port and other mobilizations on March 8th, as well as the close of the settlements’ schools in Rio Grande do Sul, and the false accusation of “irregularities” in MST accounts and funds by the Brazilian audit office. There is an increasing tendency to criminalization of those who are challenging the structures of capital, especially private property rights and the extractive and export-oriented developmental model still so dominant in Latin America, even by “progressive” governments. The attempts to criminalize Accion Ecologica in Ecuador and the MST in Brazil are clear signs of this. Such is the backdrop of class struggles to the following statement.

The Crisis Will Be Profound and Prolonged…

It’s been several months since the crisis of capitalism was unleashed on the international level, with its epicenter in financial capital and the U.S. economy. Now we have more evidence that this crisis will be profound and prolonged, affecting all the peripheral economies – including Brazil. 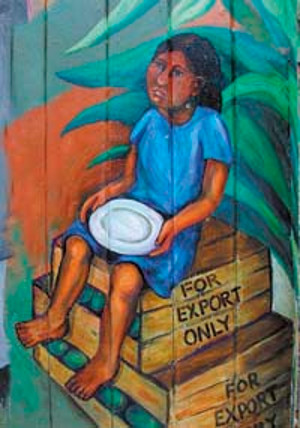 Many analyses of the crisis have been published in academia and the media. There are all sorts of positions and ideological currents. But they all converge on this diagnosis: it is a profound crisis, worse than the crisis of 1929. It will affect the entire world economy, which has been increasingly internationalized and controlled by fewer than 500 companies. It will be worse, because it combines an economic crisis, a financial crisis (of the credibility of currencies), an environmental crisis, an ideological crisis due to the failure of neoliberalism, and a political crisis due to the lack of alternatives on the part of the dominant class at the center of capitalism or the governments of the periphery.

In the history of crises of capitalism, the dominant classes, owners of capital, and their governments have adopted the same prescription to exit them.

First, they need to destroy a part of (over-accumulated) capital (lacking demand) to make room for another process of accumulation. In recent months, over 4-trillion dollars in paper money have gone up in smoke.

Second, they call for wars. War is a way of destroying goods (weapons, munitions, materials, facilities) and getting rid of the social tension of workers. And it does so in such a way as to also eliminate the industrial reserve army. Thence the First and Second World Wars, and then the Cold War. Now, given the fear of atomic bombs, they stir up regional conflicts instead. The attacks on the Palestinian people by Israel, the provocations in India, and the threats against Iran all fit in this strategy as well. The strategy is to increase military spending and destroy goods.

Third, magnify the exploitation of workers. That is to say, in crises, lower the average wages, and bring down the living standards and thus the costs of the reproduction of the labour force, in order to restore the rates of surplus value and restart accumulation. Hence also the expansion of unemployment, which keeps multitudes surviving only on the basic baskets of goods, etc.

Fifth, capital goes back to using the state as the manager of the savings of the population to shift these funds for the benefit of capital. For this purpose, capitalists again valorize the state, not as the caretaker of the interests of society, but as the steward of their interests, to use its compulsory powers and thus collect money from everyone, through taxes as well as savings deposited in the banks, in order to finance their way out of the crisis.

We are witnessing the application of these classic measures, reported in the press every day – here in Brazil, in the center of capitalism, and in the rest of the world.

But, as with everything in life, there are always contradictions. For each action of capital, the government, etc., there will be its contradiction, which society and workers can recognize and exploit to change the situation.

The historic periods of crises are also periods of change. For better or worse, there will be changes! Crises create openings and rearrange the positioning of classes in society. In Brazil, we are still apathetic, amorphous, listless, watching the description of symptoms of the approaching crisis on television. There was hardly any reaction or feedback from nearly 800,000 workers who lost their jobs just in December 2008. Nor are there comments on the IPEA research showing that, of the 17-million poor families in Brazil in the general register of beneficiaries of government programs, 79% of them are unemployed! For they received some benefits, they are not seeking more jobs, and they are left out of even the statistics of unemployment.

It is vital for the organized sectors of society – in all existing forms, whether in churches, trade unions, schools, colleges, universities, the press, social movements, or parties – to do something about the crisis. The first thing to do is to debate the nature of the crisis and find ways out of the crisis, from the point of view of workers and the majority of society. It is urgent to encourage all manner of discussions in all arenas. Paraná Educational TV’s initiative to promote this kind of public debate is welcome. But it is still insufficient. The crisis will be long and deep. We need to involve the largest possible number of militants, politically conscious men and women, to discuss the situation, so we can collectively build popular alternatives. Without mobilization and social struggles, there will be no way out for the people – except for capital. •

The original article “A crise será profunda e prolongada…” appeared in the February 2009 issue of Caros Amigos, republished by the Agencia Latinoamericana de Información on 16 February 2009. Translation by Yoshie Furuhashi.