Afghanistan: A Surge Toward Disaster

As United States President Barack Obama simultaneously escalates and crafts a new strategy for the U.S. and North Atlantic Treaty Organization-led counter-insurgency war and occupation in Afghanistan, critics say that the “surge” will send the country toward an “unmitigated disaster,” the brunt of which will be borne by the civilian population.

Since Obama announced an increase in the U.S. footprint by 17,000 soldiers on February 17, the debate over the escalation of the war in Afghanistan has reached a fever pitch. The topic now garners more headlines than the ongoing war in Iraq. 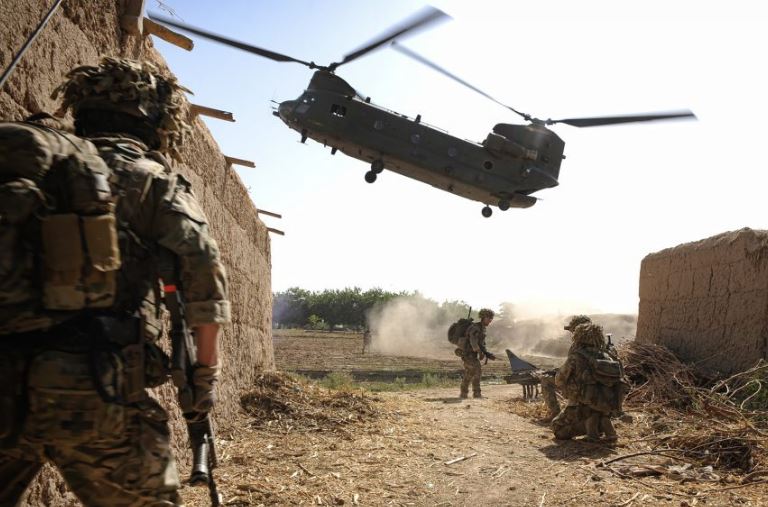 Although unreported at the time, Obama’s campaign pledges were already beginning to be fulfilled by the outgoing Bush administration. While Obama has made frequent references to the U.S.’s having “taken [its] eye off the ball” in Afghanistan, and that his administration will correct the course, he has omitted mentioning that a “quiet surge” had already begun under his predecessor, George W Bush.2

While the presence of foreign occupation forces have risen steadily in Afghanistan since at least 2004, when an anti-occupation resurgence became increasingly evident, the first signs of a more concerted escalation emerged in January 2008 when it was announced that 3,200 members of the 24th Marine Expeditionary Unit would deploy to bolster NATO’s efforts in the south of the country.3

By April 2008, Bush announced that an additional 7,500 to 10,000 soldiers would be added in 2009. According to Secretary of Defense Robert Gates at the time, it was owing to “very broad bipartisan support” for a surge in Afghanistan that “this was a very safe thing for [Bush] to say.”4

Several bipartisan reports, beginning with the report of the Iraq Study Group, of which Gates was a member, began to emerge by late 2006. In late 2007 and early 2008, several other reports, including two co-chaired by Obama’s eventual National Security Advisor (retired) General James L. Jones, were published. All advocated more soldiers, a better counterinsurgency strategy, and “unity of effort” among allies.5

In July of 2008, according to the March 2009 issue of Freedom Builder Magazine, a publication of the U.S. Army Corps of Engineers in Afghanistan, a small group of soldiers arrived in Afghanistan “to do the base camp master planning and infrastructure design … for an estimated 17,000 to 30,000 soldiers and marines, and their equipment.”6

With all of this already underway, president Bush boasted to a National Defense University audience in September 2008 that the increased foreign presence from 2006 to 2007 from 41,000 to 62,000 “represent[s] a ‘quiet surge’ in Afghanistan.”7

By late 2008, during the transition from Bush to Obama, reports indicated that the escalation was “already so detailed that the Pentagon has plans down to the last latrine and bullet.”8

All told, the 17,000 additional U.S. forces combined with additional forces pledged by U.S. allies – the United Kingdom, Germany, Italy, and Australia – will raise the foreign troop presence to 90,000 by 2010.9

Some critics of the war have decried the continuity that Obama has shown with the policies of his predecessor. In a statement e-mailed to Asia Times Online, the Revolutionary Association of the Women of Afghanistan (RAWA) stated that “we can clearly see that there is no difference between Obama and Bush for our country.”

According to RAWA, Bush and subsequently Obama’s “wrong and devastated strategy … has pushed Afghanistan and the region toward disaster and deeper conflicts.”10

While the Obama administration will surely try and put its own mark on the prosecution of the war, following the completion of a series of strategic reviews that are currently underway, one analyst is skeptical of the outcome.

As’ad AbuKhalil, a professor in the Department of Politics at California State University, Stanislaus, feels that Obama is repeating the same practice as the Bush administration by re-defining the parameters of the purported success of the “surge” in Iraq.

During a telephone interview, AbuKhalil, who also runs the popular Angry Arab blog, told ATol that “the ability of these governments to deceive on these types of decisions is so easy because they redefine the goals and then claim success” after the fact.11

Indeed, one of the first things the Obama administration did was publicly redefine the goals of the war. In testimony to Congress at the end of January, Secretary of Defense Robert Gates said that “our primary goal is to prevent Afghanistan from being used as a base for terrorists and extremists to attack the United States and our allies, and whatever else we need to do flows from that objective.”12

In an interview with Canada’s CBC prior to his first official visit to one of America’s closest allies in the war on terror, Obama reiterated that the war is “winnable, in the sense of our ability to ensure that it is not a launching pad for attacks against North America.”13

As with the case of Iraq, the purported goal of implanting Western-style democracy has been abandoned.

Despite the perception that Obama is scaling down the war in Iraq, AbuKhalil also cautioned that an end to that war is still not in sight, “The language [Obama] has used about Iraq and about the so-called withdrawal is so vague and flexible that it gives him room for leeway in order to back out of it.”

If he’s not careful, Obama could find himself with two quagmires on his hands. Thomas E. Ricks, author of the recently released book about the U.S. surge in Iraq, The Gamble: General David Petraeus and the American Military Adventure in Iraq, 2006-2008, writes, “I don’t think the Iraq war is over, and I worry that there is much more to come than any of us suspect.”14

Drawing from the lessons learned from the Iraq surge, U.S. generals have acknowledged that the expansion of the war in Afghanistan will result in higher levels of violence.

During a February 18 press briefing at the Pentagon, the top U.S. general in Afghanistan, David McKiernan said, “I would expect to see a temporary time where the level of violence might go up until we transition into holding and setting conditions to build.”15

Any increase in violence will add to the already skyrocketing levels of civilian casualties in recent years. According to a report released last January by the United Nations Assistance Mission to Afghanistan, the 2,118 civilians killed in 2008 was an increase of 40% over 2007.16

Highlighting the anticipated effect of the war’s expansion on Afghans, RAWA
stated, “The very first outcome of the surge for Afghan people will be increase in the number of civilian casualties … In the past seven years, thousands of innocent people have been killed or wounded by the U.S./NATO bombardments. In the past weeks under Obama’s rule, around 100 Afghan civilians have been killed.”

One U.S.-based analyst of the war in Afghanistan, Marc Herold, who has been compiling a database of Afghan civilian casualties since 2001, agrees with RAWA’s assessment.

Herold, a professor of Economic Development and Women’s Studies at the University of New Hampshire, told ATol that the surge will prove to be “an unmitigated disaster” that is likely to “make the situation much, much worse for everybody.”17

Herold has calculated that the “lethality ratio” of Afghan civilians under Obama, measured as averaging 2.2-2.3 civilians killed per day, is slightly higher than the ratio in the final days of the Bush administration.18

Adding that the “basic rule of thumb is for every civilian killed you get three or four resistance fighters,” Herold estimates that under Obama “we’ve created 3-500 Taliban and resistance. This is absolutely a losing proposition.”

RAWA added that “The surge in level of troops will also [result in a] surge in protests against the U.S./NATO in Afghanistan and it will also push more people
toward the Taliban and other terrorist groups as a reaction against occupation forces and their mistreatment against people.”

Others, such as neo-conservative academic Max Boot, charge that those who focus only on the number of civilians killed are “naysayers,” and encourages Obama to “ignore” them and not “lose his nerve” in the face of mounting criticisms.19

By contrast, commenting on the Western media’s banal treatment of the war’s toll on Afghan civilians, AbuKhalil said, “it can only be explained in terms of utter racism … that the country or the media of a country can tolerate such high levels of civilian casualties on a regular basis.”

For AbuKhalil, the persistent loss of Afghan life which tends to get swept away by the “propagandistic term of collateral damage,” indicates that policy-makers and the media “decided this is something we can live with, this very high toll of the civilian casualties of the country we are supposedly liberating.”

Washington-backed President Hamid Karzi has repeatedly decried the air strikes and other incidents, often carried out by secretive special forces units, that have led to civilian casualties. A poll conducted by the BBC and ABC News in February indicated rapidly declining support for both Karzai and the presence of foreign soldiers among the civilian population.20

No End in Sight

As McKiernan has stated repeatedly, it is actually wrong to characterize the occupation’s escalation as a “surge,” which connotes a temporary influx in the military footprint, as was the case in Iraq.

Recently, McKiernan said “this is not a temporary force uplift … it’s going to need to be sustained for some period of time … I’m trying to look out for the next three to four or five years.”21

Three to five years may itself be an underestimation of the anticipated duration of the U.S.’s stay in Afghanistan. In recent testimony to the Senate Armed Services Committee, (retired) Lieutenant General David Barno, a former commander in Afghanistan, said the counter-insurgency campaign that he and other experts are advocating could last until at least 2025.22

Contrary to the elite, bipartisan consensus inside North America that supports the war’s escalation, and echoing fears that are common among Afghans, RAWA argues that “We think the 30,000 extra troops will only serve the U.S. regional strategy in changing Afghanistan to its military base, it will [have] nothing to do with fighting the terrorist groups, as they claim.”

AbuKhalil adds that poor coverage of the conflict, combined with the “cloak of the United Nations,” whose sanctioning of and presence in Afghanistan helps provide legitimacy to the war, means that “the president of the United States can do anything that he really wants, and that’s what I think may allow for the worsening plight of the conditions of the civilian people of Afghanistan.”

For AbuKhalil, “anything short of complete withdrawal and allowing [Afghans] to determine their future totally and independently of the United States is going to be a compromise with the principle of self-determination.”

Herold feels that mapping out a way to withdraw from Afghanistan should be Obama’s top priority: “I think that is what we really should be talking about here, rather than entering into a much greater degree.”

While all signs indicate at least a temporary escalation of the war under Obama and General David Petraeus, who oversees the war as head of U.S. Central Command, an immediate exit strategy appears, for now, to be off the table.

Regardless, RAWA feels that “Today many people in Afghanistan ask for withdrawal of the troops and regard them [as] useless to do anything good for Afghanistan.” •

This article is copyrighted to Asia Times Online.