Not a government to fail to live up to its reactionary commitments, the Tories signed Canada’s free trade agreement with Colombia on November 21st. The signing is the culmination of the Tory government’s aggressive campaign to reach a trade deal with the human-rights troubled Andean country. Prime Minister Harper first announced his government’s intention to get a deal with Colombia during his state visit there in July, 2007. Sixteen months and three high-level cabinet-minister visits later, and voila!, mission accomplished. 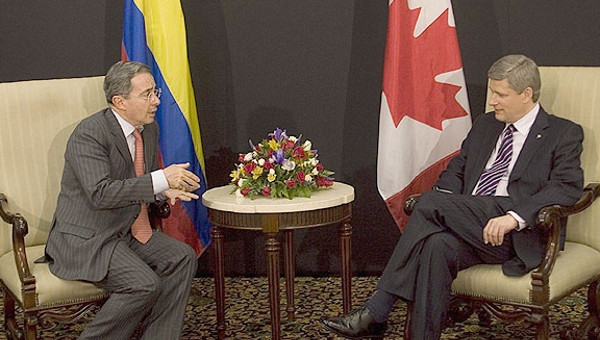 The Tories actually used the occasion of the recent Asia Pacific Economic Cooperation (APEC) meetings in Lima, Peru to sign the agreement. The signing of the trade deal at an international meeting that was dominated by discussions of what will likely be the worst global financial crisis since the Great Depression speaks volumes about the Tory government and its neoliberal attitude to the economic meltdown: more, not less, free markets is the proper medicine to get us through our economic sickness (this was confirmed a week later when Finance Minister, Jim Flaherty, followed his economic update by announcing no new spending or economic stimulus was planned). Harper arrogantly proclaimed in Lima: “In a time of Global economic instability free trade is more important than ever.”

The deal is part of a major rapprochement with Colombia, and as I’ve argued previously is actually part of a broader Canadian geo-strategic agenda in the Andean region (see my articles at Znet and Bullet). But rapprochement in general, and this trade deal in particular, come at a considerable human rights cost. Harper consistently downplays the scale of the human rights disaster in Colombia, and erroneously suggests that Colombian President, Alvaro Uribe, is part of the solution rather than the problem. “While there is no denying that Colombians continue to live with serious security challenges,” Harper blithely stated in Lima, “the improvements we have seen over the last several years gives us much reason for optimism.”

Harper’s faith in Uribe is about as well warranted as his faith in free markets; and like his faith in free markets, it’s based on ignoring all the evidence to the contrary. In actual fact, the human rights situation in Colombia is deteriorating. According to the International Centre for Trade Union Rights, by September, 2008 there had already been 40 unionists assassinated in Colombia, compared to 38 over the same period the year before. Less than a week after Canada concluded its trade negotiations on June 7 of this year, union member, Favier Dario Pelaez Castaño, was murdered. Death threats, illegal arrests and armed attacks have also increased “substantially” from the year before.

The majority of these attacks on union activists are perpetrated by the various right wing paramilitary groups roaming Colombia. This allows trade deal apologists, to the extent they acknowledge human rights atrocities against unionists occurring in the country, to suggest that the Colombian government bears no responsibility. However, as a number of commentators have shown, paramilitaries have close ties to the Colombian military, and often operate with the military’s at least tacit support. On top of this, the Uribe government has been embroiled in a scandal for several months now, in which the ties to paramilitaries of dozens of his political allies have been exposed.

Indigenous peoples, whose land in large swaths of the country is much-coveted by Canadian oil and gas and mining companies for its subsurface riches, have also suffered greatly under the Uribe regime. The Centre for Indigenous Cooperation (CECOIN) reports that not only did the number of violations against indigenous communities increase in the first four years of Uribe’s government, but those acts attributable to government security forces increased as well. From 1998-2002 there were 298 recorded cases of human rights violations against indigenous peoples committed by government forces. From 2002-2006, the years of Uribe’s first term, there were 672 – a significant increase. State-sponsored assassinations of indigenous activists also increased from 26 between 1998-2002 to 62 between 2002-2006.

A little over a month before the signing of the trade deal in Lima, a mass protest of indigenous groups in Cauca, demanding the government fulfill previously-made promises around land, education and health, was met with a massive show of force by state security forces. The security forces attacked the protest, injuring more than fifty indigenous activists and killing one. That was the 11th indigenous person killed in Colombia in the three weeks leading up to and including the protests in Cauca. The military push into indigenous communities in Cauca has increased under Uribe, as the region has untapped (by foreign companies, that is) natural resources. Security forces often accuse indigenous activists of being guerrillas, and justify their killings on these grounds, despite the activists’ explicit dissociation from guerrilla organizations.

Tied to the attack on indigenous communities is the increase in displacement occurring across the country, as the military and paramilitaries clear regions of their human inhabitants, including along with indigenous peoples, Afro-Colombians and poor peasants, for resource development. The war between guerrillas, such as the Revolutionary Armed Forces of Colombia (FARC), on the one hand, and paramilitaries and the army, on the other, has also contributed to the displacement. More than 280,000 people were displaced over the first 6 months of 2008, 41% more than the same period in 2007.

Disappearances have also increased significantly under Uribe. According to Colombia observer, Gary Leech, Colombia’s Prosecutor’s Office is investigating the disappearance of 1,015 people in the past year, which is more than four times the number of disappeared in 2007. Disappearances have increased for four years in a row, and the military’s involvement is suspected in more than 90% of cases. As Leech starkly notes, the massive scale of disappearances “places the Uribe government on par with the dictatorship of General Augusto Pinochet during the darkest years of Chile’s dirty war.”

While the Tories downplay the scale of the human rights problem in Colombia, they can’t ignore it outright. And so to assuage their critics, they included a Labour Cooperation side agreement (not part of the actual trade deal), which they claim will ensure that Canadian trade and investment doesn’t contribute to an already bleak rights situation in the country. The side agreement calls on the two countries to respect basic core labour standards (right to unionize, no child labour, no forced labour etc.). But, not surprisingly, there are a number of serious limits to this side agreement that should give us pause.

For one thing, there’s no standing body established beyond those that might already exist in the respective countries to oversee the side agreement’s day-to-day implementation or to which workers can complain when their rights have been violated. In other words, Colombians will have to complain to bodies within the Colombian government, which presumably they can (theoretically at least) do now and which therefore sharply diminishes any efficacy the side agreement may have had given the government’s rights record.

There is a provision for either of the partner countries to request a ministerial “consultation” with each other if they feel obligations under the side agreement aren’t being met (Part Three of the agreement). If unsatisfied with the response, the country that initiated the consultation can then call for the formation of a review panel to report on the claim that obligations aren’t being followed. But we have to ask: if Canada signs a trade agreement with Colombia after purposefully downplaying the depth of latter’s human rights problems, and after ignoring the implication of the government with which it signed the agreement in these problems, why would it complain about these problems after the agreement comes into force? Further, given the violence and intimidation that’s regularly visited upon unionists in Colombia, what is the likelihood of them coming forward to tell their story, or doing so safely?

And the punishment for failing to live up to obligations? Fines. As I noted in a previous article (referenced above), this amounts to a decriminalization of violence and intimidation. Moreover, it’s not clear in the side agreement that the Colombian government will be held responsible for the actions of paramilitaries, who’re responsible for a significant amount of the violence against union activists and retain a nominal independence from the government.

Another major flaw of the Labour Cooperation side agreement is that it obviously doesn’t cover indigenous peoples, who’re victimized at staggering rates in the name of foreign investment and corporate interests. How can Canada talk meaningfully about addressing human rights concerns when the trade agreement totally ignores one of the most violated groups in Colombia?

The Trade Deal Must Be Stopped

The implication is obvious: the Labour Cooperation side agreement and the talk of human rights concerns in general are just window dressing. The real interest on the part of the Tories and Canadian capital is penetrating the Colombian market and gaining control over its subsurface riches. Canadian foreign investment into Colombia, for instance, has been steadily increasing in the last few years, and like all of Canada’s post-1994 trade agreements, this one has a strongly pro-corporate investment clause as its centrepiece (modeled, in fact, on NAFTA’s chapter 11). Canadian foreign investment is heavily concentrated in the mining and oil and gas industries, though Canadians also have a strong presence in printing, paper and footwear. In 2007, according to Statistics Canada Canadian companies had a combined direct investment stock of $739-million in Colombia, almost double from the year before. The Canadian embassy in Bogota estimates it at $3-billion, however, as a large chunk of Canadian investment is made through offshore financial centres where tax burdens and regulations are weak. More than $2-billion in investment is being planned over the next two years.

If the agreement is successfully implemented, it will represent a major victory for Canadian capital: secure economic access to a country rich in resources before even the Americans finalize their own deal with it; stronger ties to an imperial client state in a region with powerful social movements and where left-leaning populist governments have made electoral gains (again, see my previous articles on this issue); and a clear victory (both ideological and material) for corporate profits over social considerations.

The potential defeat of Harper’s minority government may put a new twist on the trade agreement. Before his political misfire this week, Harper committed to having a vote on the agreement in Parliament, despite a vote not being technically necessary for it to be implemented. As for the minority coalition government that will likely replace the Tories, the NDP has criticized the agreement sharply, but the Liberals have a long track record of supporting investment in Colombia and didn’t come out against the deal when the conclusion of negotiations was announced last June. The NDP has already conceded on its election pledge to rollback corporate tax cuts as part of its deal with the Liberals; how committed is it to its opposition to a trade deal with Colombia?

As with all other matters related to the potential minority coalition – indeed with electoral politics more generally – we can’t rely on the political parties, including the NDP, to do the right thing. We need to mobilize people to force the government, regardless of who’s in power, to back down from the agreement. •

Todd Gordon is the author of Cops, Crime and Capitalism: The Law-and-Order Agenda in Canada and Imperialist Canada. He teaches at Wilfrid Laurier University at Brantford.