Colombia: After Decades of Reaction, A Turn Left

For the first time ever, Colombia has chosen new leadership that is not conservative. Voters in the third-most populous nation in Latin America narrowly elected the former mayor of Bogotá, Gustavo Petro, in a runoff election against his conservative opponent Rodolfo Hernández, with 50.47 percent of the votes.

Petro, who ran on a platform to tackle inequality, is a former rebel soldier who, at the age of 17 joined a now-defunct guerilla group called M-19 and was briefly imprisoned and tortured. His election is viewed as part of the ongoing “pink tide” in Latin America where a wave of left-leaning, but not-hardcore-communist leaders have succeeded in taking power through democratic elections.

Perhaps even more impressive than Petro is his running mate, Francia Márquez, the nation’s first Afro-Colombian vice president and a celebrated environmental activist. No other Afro-Colombian has risen so far up the ranks of the government as Márquez – in spite of the fact that nearly 10 percent of the nation’s population is of African descent – and neither has anyone with the kind of environmental and social justice credentials that Márquez has. 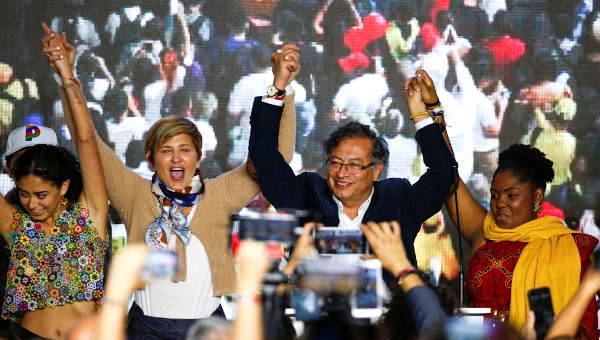 Hailing from one of the poorest provinces in Colombia, Cauca, Márquez was awarded the Goldman Environmental Prize in 2018 for her courageous work against illegal mining. In 2014, she led 80 women on a massive march spanning 10 days and 350 miles and faced death threats for her environmental work.

Janvieve Williams Comrie, executive director of the US-based organization AfroResistance, is a long-time friend of Márquez’s and someone she considers a “sister and comrade.” Comrie traveled to Colombia for the election and in an interview she shared her elation at seeing someone who looks like her rise to the position of vice president.

Márquez “is loved by the whole country,” says Comrie. “She has been impacted by the [civil] war, she is an internally displaced person, and to come from where she comes from and now be the vice president of a nation, it’s for the people, by the people.” She adds, that Márquez’s win, “is the whole community’s victory.”

For a nation that has embraced US-style neoliberal politics and, for years, been a bulwark against leftist leaders in nations like Venezuela and Cuba, Colombia’s election results represent a shattering of the prevailing regional political order in the Americas.

Colombia has been a United States ally for 200 years. The US State Department boasts of the more than $1 billion aid it has given Colombia in recent years, saying on its website that “With the support of the United States, Colombia has transformed itself over the past 20 years from a fragile state into a vibrant democracy with a growing market-oriented economy.”

Already, pro-capitalist Western media outlets are responding negatively to the election results. Barron’s published an article with a headline that read, “Colombia’s New President Moves the Country to the Left. Markets Don’t Seem Enthusiastic.” Bloomberg had a similar response with a story titled, “Colombian Markets Sink After Leftist Wins Presidential Election.” The cryptic desires of “markets” are apparently important enough to warrant strong opinions from media outlets about the nation’s new leadership.

What’s missing from the news coverage is how Colombia “has one of the highest levels of income inequality in the world,” and the second-highest in Latin America and the Caribbean, as per the World Bank. Further, more than 40 percent of Colombians live below the poverty line.

To news outlets like Barron’s and Bloomberg, such statistics are unimportant. To the State Department, this is apparently what a “vibrant democracy with a growing market-oriented economy” looks like.

Given how reliably conservative and pro-US Colombia’s leadership has been, how is it that Petro and Márquez won? Comrie explains the election results saying, “people needed a change.” Petro and Márquez’s “whole platform was around cambio, which means ‘change’ in Spanish.”

Environmental justice is a critical aspect of the change that the new government has promised. Comrie contextualizes how “[Colombia] is really the environmental lung to Latin America,” given that a significant portion of the Amazon rainforest lies within its borders. Colombia’s rainforest has experienced devastating deforestation.

Petro and Márquez, according to Comrie, are, “committed to dealing with the high levels of deforestation,” and to “figuring out how can we restore what has been depleted and what has been exploited from an environmental perspective that is accountable to Mother Earth first, and then to the economy, second.”

A significant portion of the United States’ aid to Colombia has come in the form of mass aerial fumigation of glyphosate, a “probable carcinogen,” to supposedly combat Colombia’s cocaine farming efforts.

Furthermore, the United States’ “Plan Colombia” has centered on a failed drug war that analyst Brendon Lee, in an in-depth report for the Harvard International Review, described as, “largely ineffective, causing drug production to expand into other countries and creating a militarized war on drugs that has victimized countless Colombian citizens.”

Petro and Márquez have vowed to take the country in a different direction, moving away from aerial fumigation and focusing instead on eradicating poverty among farming communities.

According to Comrie, the election results are, “not only about Colombia, it’s about the whole region. And those policies [that Petro and Márquez plan to implement] will impact how other governments behave” elsewhere in Latin America.

She explains that Márquez and Petro plan to create a Ministry of Igualdad, or Equality which, “will propose new policies and new structures,” to address inequality, such as, “giving women heads of households [who] have been excluded from the economy, a base salary so that they can then sustain themselves.” Additionally, there is expected to be an “expansion of social programs,” and an exploration of programs like “education for all.”

Historically, the US has opposed left-leaning governments in Latin America whose focus on eradicating poverty outweighs a desire to enrich industries. The US has instead preferred right-wing authoritarian rule and backed dozens of coups on the continent.

In replacing a pro-US government with one that is focused on progressive solutions to internal problems, Colombian voters face the prospect of American interventionism. Comrie advises President Joe Biden’s administration, saying that if Biden wants to address climate change, “this is really the administration to work with on that.” But, she warns, “it can’t be on Biden’s terms, it really has to be on Petro and Márquez’s terms.”

Ultimately, Comrie thinks, “it’s time to really… shift the power dynamics” between the US and Colombia. •